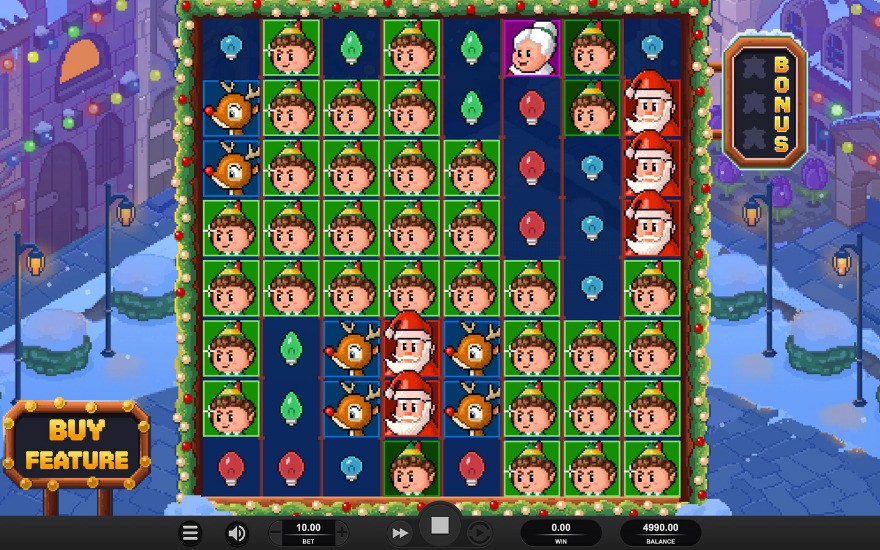 Santa's Stack is a new casino slot from Relax Gaming where we join Santa in a festive gaming adventure. They have chosen to create this slot with an 8-bit look, giving a nostalgic feel to the seasoned players, similar to what we saw in their previous Hellcatraz slot. Christmas certainly comes early this year, where the slot is filled with a lot of exciting features like Free Spins and Secret Santa Re-Spin that can give big gifts of up to 20000X the bet. The business has certainly gone well over the years, where Santa has managed to stack up some big piles of cash, but it’s all about giving in Santa's world, so with the help of this slot we can manage to partake of that. Let's take a read on what it takes to obtain the big wins.

Santa's Stack is a video slot from Relax Gaming that features 8 reels and 8 rows, where you create a winning combination by landing a cluster of 5 or more of the same symbol types. You can choose between making a Min.bet of 0.10 and a Max.bet of 50. Santa's Stack has a hit frequency of 23.97% and an RTP around the average of 96.27%, which increases to 97.00% within the Bonus Buy feature. It is a high volatility, where the lucky player can win up to 20000X the bet.

Within this extraordinary gaming adventure with deep pocketed Santa, we can with his help and a couple of other festive features win big. The features are Wild Symbol, Secret Santa Re-Spin, Free Spins and Bonus Buy.

The game design is Christmas themed, where within an amusing pixel art world we meet Santa and his friends. In the background, the snow slowly falls on this angular but atmospheric place, where the lights along with the snow light up the dark winter night. You can play this slot on all the device’s notepads, desktops and mobiles. You create a winning combination by landing a cluster of 5 or more of the same symbol types.

The lower paying symbols are lightbulbs in the colors blue, green and red. Landing 60 of the same symbol type pays between 750X to 1250X the bet. The higher paying symbols are Rudolph, Elf, Santa's wife and Santa himself. If you land 60 of the same symbol types, it pays between 2000X to 10000X the bet. The game's wild symbol consists of a red W with a yellow background and during the spins the Secret Santa Re-Spin feature can be activated, in which gift-shaped mystery symbols are created. The game's scatter symbol consists of a decorated Christmas tree with a golden star on top. Let's find out what the features do.

What is the max win in the slot Santa's Stack?

What features are available in the slot Santa's Stack?

The game's wild symbol helps to create more winning combinations by substituting for other symbols, except for the scatter and mystery symbols.

If you want to take advantage of the bonus game right away, you can use the Bonus Buy feature. You pay 100X the bet and then the Free Spins feature is activated, where the RTP increases to 97.00%.

This is certainly an admirable slot that has been created, where the game's 8-bit design creates a pleasant touch to the spins that are made. Christmas themed slots tend to be simple creations from many game providers, where they only change the theme, but the features remain the same. Relax Gaming really breaks this trend within this slot, where Santa gives us a warm welcome. We spin the reels on a larger 8X8 slot, where winning combinations are created by landing 5 or more of the same symbol types in a cluster. By landing 60 of the highest paying Santa symbol, you get 10000X the bet. It's certainly a gigantic win, but it may seem surreal at first, but when you're introduced to the Santa Secret Re-Spin feature, you immediately see the light in the tunnel.

By creating a win with a wild symbol, the Santa Secret Re-Spin is activated, where all of the winning combinations turn into mystery symbols. Then you get a re-spin where you can manage to add multiple symbols to this cluster of mystery symbols, which can yield gigantic wins when the symbols finally appear. But it is clearly within the bonus game that the chances of winning big increase. Then you are greeted with 5+ free spins depending on the number of scatter symbols on activation and what makes this feature extra special is that you are guaranteed to land wild symbols on every spin that is made, which increase by 1 in number with each new spin that occurs. More wilds, means more chances to activate the Santa Secret Re-Spin feature, where you also can get extra free spins and increase the win multiplier.

The composition of the features creates a very entertaining moment in both the base and bonus game, where Santa certainly is generous with the wins, as the symbols pays decent, which with the large cluster of mystery symbols, quickly can generate gigantic wins. Relax Gaming has chosen a good level of the RTP which is fixed, unlike many other game providers who are increasingly starting to use varying RTPs. If there's one thing you can always count on in Relax Gaming slots, it's generosity when it comes to the potential maximum win, which is also very high this time around. Santa kickstarts the Christmas celebrations by gliding in on his sleigh overflowing with banknotes, where with the help of a very lucrative Re-Spin feature, we can get many exciting packages to open.

Santa's Stack is a slot where we get to enjoy a very eventful playtime in front of the screen together with the loaded Santa, where he can sprinkle gigantic amounts of mystery symbols on the reels.