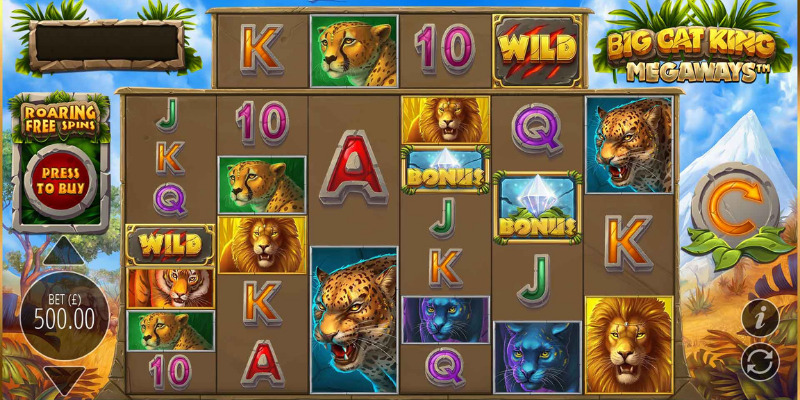 Taking you to an impressive jungle adventure is the Big Cat King Megaways slot powered by the Blueprint Gaming software. As suggested by the game’s title, with the very first spin on Big Cat King Megaways, you venture into the wild to meet with the most majestic jungle felines. This jungle-themed release features a standard Megaways gaming grid that boasts 6 reels, between 2 and 7 rows with 117,649 paylines.

Blueprint Gaming is known for its bonuses-packed releases and one of those is Big Cat King Megaways that is not only packed with loads of paylines but also delivers loads of free spins, an excellent unlimited winning multiplier alongside mystery symbols, and a super rewarding Spin Boost Wheel mode. If these bonuses are not convincing enough to try the game, its spectacular maximum winnings of 50,000x your stake will be.

To hop on the most thrilling jungle adventure to meet lions, leopards, and other African cats, you invest between 0.20 and 10 credits per spin. Another huge advantage of the game is its favorable RTP of 96.5% which reaches 97.0% when you trigger the game’s Bonus Buy option which is also something we commonly associate with Blueprint Gaming releases of this kind.

With a super interesting, theme, the game’s vibrant reels are set against breathtaking African plains that are home to all sorts of majestic animals including big cats such as lions, leopards, panthers, tigers, and cheetahs that you will come across the game’s six reels. The African savanna which inspired the game is around five million square miles big and it takes almost half of the entire continent.

African savannas are magnificent places dominated by rolling grasslands while their spectacular wildlife remains one of the biggest inspirations for real money casino in Canada games makers such as Blueprint Gaming. What is even more, the most famous savanna national parks Serengeti is located in the African savanna. This national park located in Tanzania attracts millions of visitors from all over the globe who come here to see wild animals living in their natural habitat.

If traveling here has been a dream of course, with Big Cat King Megaways you get to travel there whenever you like. With the African savanna depicted on the game’s backdrop, its reels are populated by standard playing cards that appear alongside more rewarding five big cat symbols. The most rewarding is the mighty lion which pays up to 50x your stake for six matching symbols landed on a payline. The remaining premium symbols pay up to:

• 2x your stake for six cheetahs

• 2x your stake for six leopards

The Most Rewarding African Safari

With the Big Cat King Megaways slot, you enjoy the most thrilling African safari journey. Besides the game’s spectacular visuals, impressive mountain ranges, and African plains in the backdrop and vibrant symbols on the reels, you will also be impressed with its bonuses department. First of all, there is a super rewarding wild symbol featured in the game which will deliver more winnings thanks to its replacing powers.

Then, you benefit from the game’s Cascading Symbols mode which is always present in slot games that use the Megaways Gaming engine. With every winning combo you score, you have another shot at winning as those winning symbols get removed from the reel set. Their vacant spaces are replaced by new symbols that drop from above. If these new symbols lead to a new combo, another reel cascade follows and the process repeats with every new winning combo you score.

The Big Cat King Megaways slot also features a great Mystery Symbols mode which relates to the game’s green leaves symbols. Once these mystery symbols hit the reels, they turn into the matching randomly chosen symbol which naturally increases your winning odds.

Venture into the Wild

As you explore the magnificent African wildlife with Big Cat King Megaways, you benefit from the game’s Free Spins round. To initiate the bonus, you need to collect at least four of the game’s scattered diamond symbols in any position on the reels. The bonus initially grants 12 free spins while you win extra 5 free spins for every extra scattered diamond symbol that you land during the bonus round.

If you trigger the bonus with six triggering scatters, you are instantly granted 22 free spins. If you feel lucky, you can use the game’s Spin-Creaser Wheel bonus to earn more free spins. With this bonus, there are up to 50 free spins offered up for grabs, but the bonus is not triggered on real money as there is a fee you pay.

Awesome spinning actions during the Free Spins round also deliver another great bonus, the game’s Unlimited Win Multiplier mode. Every time you score a cascade win during the bonus, your multiplier increases by one and it does not reset on your non-winning cascades, but only rises. Depending on your location, Big Cat King Megaways also allows you to use its Roaring Free Spins Bet mode. For 25x, 50x, 75x, and 100x your stake you instantly get five, eight, ten, or twelve free spins.

The game will be released on the 16th of September