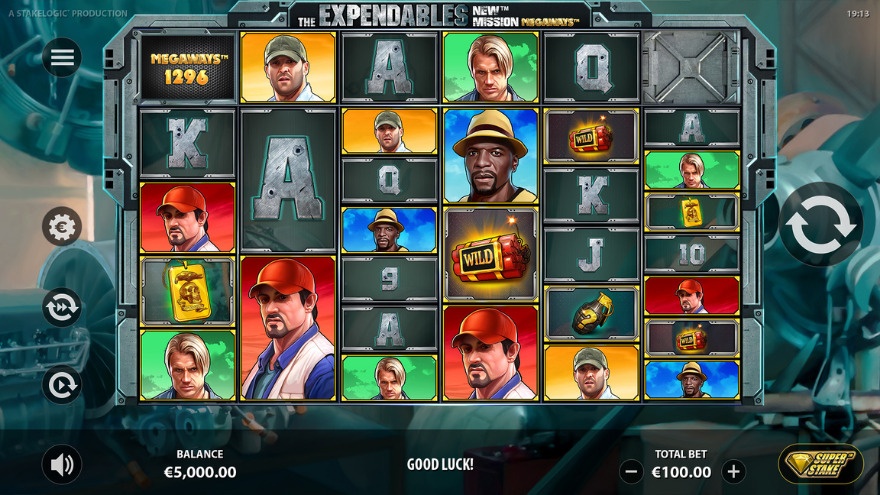 The Expendables New Mission Megaways is a casino slot from Stakelogic where we get to meet a group who together truly define badass. We are of course talking about Sylvester Stallone, Jason Statham, Terry Crews and Dolph Lundgren, where we have been able to follow these people in a couple of action-packed films over the years. Movies that are filled with action, clichés and a constant excitement, and Stakelogic took the opportunity and created a slot within this franchise. In 2020, Stakelogic launched the slot The Expendables Megaways, a gaming adventure that quickly became a favorite among many action film fanatics out there, but with its wonderful combination of features, it also attracted the attention of a much wider group than that. Just as the name reveals, the gang is back with a new mission this time, which promises even more adrenaline-filled spins than before, so let's find out if this is true and what is expected to appear during the spins.

The Expendables New Mission Megaways is a video slot from Stakelogic that has 6 reels and 2 to 7 rows. This variation in the number of rows is due to the game's Megaways mechanic, where 243 ways to win can be up to 117649 ways to win during the spins. You can choose to make a Min.bet of 0.20 and a Max.bet of 40, but by activating the Super Stake the bet size is doubled and can thus be up to 80. It is an RTP that is around the average, where we have an RTP of 96.08% and a medium/high volatility, where the lucky player can win up to 12228X the bet.

In this slot, which is filled with a bunch of action-seeking people, we also have a bunch of great features to help us in the hunt for the big wins. The features are Wild Symbol, Multiplier Wild Symbol, Cascade, Mystery Symbols, Free Spins, Golden Skull Symbol, Super Stake and Gamble.

The game's design consists of The Expendables theme, where we together with Sylvester Stallone, Jason Statham, Terry Crews and Dolph Lundgren have our aim set on finding the big wins. In the background of the reels, you can see steaming machines and the reels consist of a metallic look. The music played in the background plays a constant fast-paced music that gives an extra thrill to the spins and when you create winnings you get the opportunity to use the Gamble feature, where the sound of a ticking bomb is played in the background. You can play this slot on all notepads, desktops and mobiles. You create a winning combination by landing 3 or more of the same symbol types on adjacent reels starting at the far left.

What is the max win in the slot The Expendables New Mission Megaways?

What features are in the slot The Expendables New Mission Megaways?

The game's wild symbol helps to create more winning combinations by substituting for other symbols. The only symbol it doesn’t substitute for is the scatter symbol.

During your spins, grenades can be randomly thrown at the reels and these are the mystery symbols. When these explode after the reels have finished spinning, one of 4 bonuses that are multiplier wild symbols, free spins, extra wild symbols and matching symbols will appear.

When you spin the reels, there will be a win multiplier, where it starts at 1X and randomly increases by between 0X to 5X with each new spin made. This win multiplier is applied to any winnings that are created and remain during the entire bonus feature. You can also take part in various mystery symbols during the spins, which really can spice up the atmosphere.

Once you have activated the Super Stake feature, the Golden Skull Symbols feature can be activated randomly. You can then get up to 222 Golden Skulls placed on the reels, where these will then show the same paying symbols.

When you create a win within the base or bonus game, you can choose to use the Gamble feature. Then you can choose between guessing the right color or suit on a card that doubles or quadruples your win if you guess correctly. If you guess wrong, you will instead lose everything you have won. You can continue until the current win limit has been reached and if you already have created a win that exceeds the win limit for the Gamble, this feature will not be activated.

This is a slot that is fully loaded with constant action in the base game as well as the bonus game. The theme that has been chosen with well-known faces associated with thrill-seeking adventures goes together in a very elegant way with the game's features. When you start the slot, you are immediately met by music that raises the mood and gives the game an extra layer of action. It synchronizes well with the game's various events where the tempo increases extra when you have activated the Gamble feature, where you, like a disarmament of a bomb, hear a ticking sound. It is a classic Megaways mechanic that we get to take part in, where it can give up to 117649 ways to win during the spins and together with the cascade feature there will be many happenings you get to take part in.

The wild helps as usual to create more winning combinations and it gives a great touch to the spins, but to increase the excitement extra you can also land multiplier wild symbols that contain multipliers of between 2X to 10X the bet. If you land several of these multipliers on the same winning combination, they will be multiplied by each other and giant wins will quickly become a fact. Stakelogic has in a very elegant way put together the various features within this slot and randomly during the spins you can activate the mystery symbols, where these are represented by hand grenades being thrown at the reels. These can include various things like multiplier wild symbols, free spins, extra wild symbols and matching symbols. The game's bonus game consists of free spins where with each new spin you get a random multiplier of between 0 to 5 added to your total win multiplier. This win multiplier can grow incredibly large as Stakelogic is very generous with the number of free spins that you start with and also can retrigger during the spins.

It is a good level of the RTP, where a higher volatility can make the lucky player scoop up a win at an incredible 12228X the bet. Like a charming action movie, you are quickly captivated in front of the screen during the spins on this slot. Since a good mix of features delivers constant thrills, and it is very rare for an uneventful time during the spins. Like the action movies, it is usually a higher risk but where you can be richly rewarded if you play your cards right. Where there really is a no guts no glory, no legend no story mentality that this slot follows.

The Expendables New Mission Megaways is a slot where well-composed features together with famous faces from the action world give very entertaining spins.