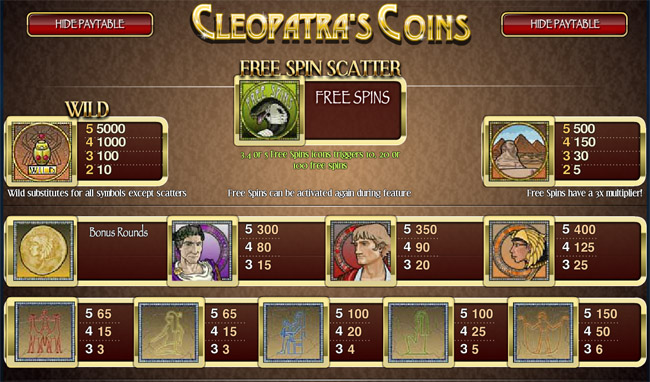 Even though Cleopatra's Coins video slot was released a while back, it doesn't mean it has no merit today. One of the most famous queens throughout the history always has her place, and it's no different when it comes to this game, powered by Rival. On 5 reels, and 15 win lines, this beautiful and powerful woman will show who is the true ruler of Egypt. To witness her victory, try this game in her honor, and you'll not regret it. As this isn't the newest slot, it features old-school settings. Nevertheless, it'll be fun to play, especially when the snake leads you to her special free spins hideout.

Cleopatra's Treasures Up For Grabs

There aren't many women through the history to claim the power and not be forgotten until this day, even though they more than deserve to be honoured. One of those lucky ones is Cleopatra, and despite the fact that her name is more associated to the powerful men of  Rome, as we have them displayed in the game, it doesn't diminish all the things she has accomplished as a ruler. Therefore, we have a game with her name as the title, and you'll have a chance to see she isn't stingy, quite the opposite.

On the reels, there are a lot of sand tones, matching to the lands of Egypt completely. Turning on the reels, are all the elements related to Cleopatra or Egypt. For example, there are Julius Cesar, Marc Anthony, the Sphinx, a Cleopatra Bonus coin, a few drawings representing her life as a mother, a woman, and a ruler.

While the game lasts, in the back you'll hear the mystical sound, fitting to this Egypt experience.

As a special symbol appears the snake, and if you get at least 3, you'll see the snake's attempt to bite our beloved queen. There is also the Wild as a Scarab, enveloped in gold, with a few red spots.

The Queen Rules the Reels

Cleopatra, as any good ruler, in order for her people to be happy, opens the door and shares the treasure. But first, all of her subjects need to prove they are loyal. So, the task is to unlock the doors. That can only happen if you find 3 or more wandering snakes. Your reward will be free spins between 10, 20, or even up 100 free spins, and a few special perks on the way. Also, the re-triggering option shouldn't be left out.

We can also find the Wild Scarab during the whole game, helping by replacing others on the way, but the Cleopatra Bonus Coin and the Free Spins snake. The Wildcard also brings coins to the table, so he definitely shouldn't be discarded.

An Audience with Cleopatra

If the Cleopatra truly deems you worthy, then she'll give you her special coins, and this will be a sign for you to follow her into the Bonus secret chamber with her personal treasure. In here, she'll allow you to pick between rows of urns. The number of urns responds the number coins which triggered the Bonus Round. Each one will reveal a coin amount, added to your balance when it's all over. This special and quite rewarding feature is thankfully available in the Free Spins, which proves the queen has a heart made of gold.

Give your Tribute to the Powerful Woman

It doesn't matter that Cleopatra's coins video slot is old-school, it's still fun to play. The game's most rewarding time begins with the free spins, and with the retriggering occurrence, it get's pretty awesome. There are a few animations on the way, so that's something else to be considered. In the end, if you are not intimidated by powerful women, then without a doubt you should give this queen a chance, and in no time she will show her immense gratitude.