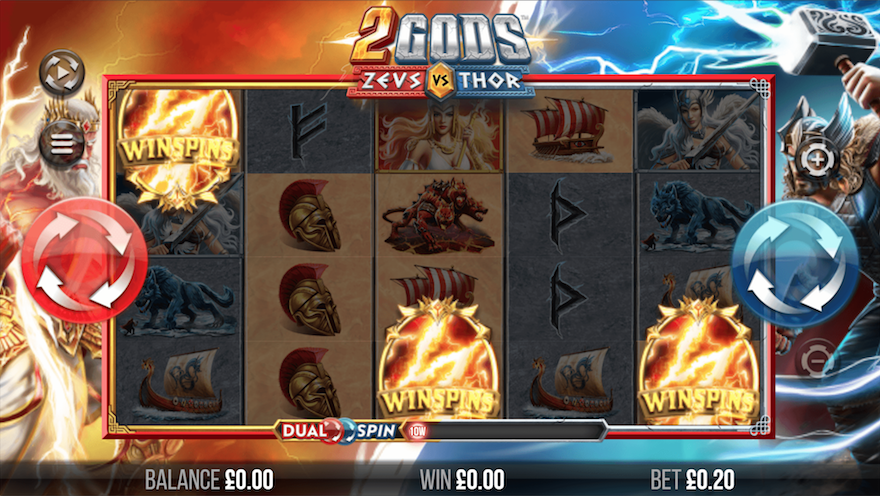 Zeus vs Thor, how did this happen?

It will be difficult to find a more epic combination than this. In a grand battle like this, it can be difficult to know who to bet on. Or maybe rather that a disagreement will arise, as the players will have different opinions about who the best one is. This game solves that problem, through its DualSpin function you can bet on the color (god) that you believe in the most. The game has 5-reels and 4-rows, with 2048 paylines. The Min.bet is 0.10 and the Max.bet is 20, and thanks to the DualSpin function you always have a chance to double your winnings each round. What is this DualSpin that I mention so much? I will go more into detail with that later in this review, so you can be calm. The Return to player ratio, RTP so to say is on 96.5% with a high volatility gaming experience. The maximum amount that could be paid at once is 15'630 X the amount you bet. Finally, to put the cherry on top of these wonderful game features, the game comes with a bonus, in the form of a Win Spins bonus.

Here we are, in the battle between two legendary gods. Where one is Thor from Norse mythology, the god of lightning and thunder. Then we have Zeus from Greek mythology, the god of sky and thunder. They both possess the gift to control the thunder and now we have a final epic battle between them. Where these gods have tremendous strength and power, who will win and help you scoop the big payouts?

2 Gods Zeus Vs Thor, is created by 4ThePlayer, where it is distributed through Yggdrasil's platform. They show that even if they are a small game developer, one should really not underestimate their ability to deliver top-class games. They deliver innovative game designs, such as DualSpin in this slot machine. They have a vision that it should be 100% adult design and no childish themes in their games. It's something they really prove by phenomenally designing the characters to look as real as possible. You really see the gods' anger and rage towards each other and you get the feeling that there will be a real battle and no hug party.

It's really cool when two strong characters fight against each other. Where we have previously seen Batman fight Superman, there are truly no restrictions on who can have a battle. Considering that these two gods both master the thunder, the discussion has arisen several times on forums and discussions between friends, about who is really the strongest. Once inside the game, we have a slot machine with 5-reels and 4-rows, where we on the left side have an angry Zeus holding a lightning bolt that will soon be thrown. To the right we have Thor, who holds his hammer Mjölnir high. There are a number of well-designed symbols on the slot machine. Where there are, among other things, Viking ships, wolves, goddesses. On each side of this playing field there are also the previously mentioned spin buttons. One large in red and one large in blue. With thunder and lightning bolts winding around the entire game screen, everything gets much cooler with their stunning visuals. This game comes with a BIG REEL Portrait Mode, which makes the gaming experience even better for those who gamble via mobile devices. By providing the opportunity for a more zoomed in slot.

The magical spins that give a guaranteed win

This game comes with many symbols, half of which correspond to Norse mythology and the other half to Greek mythology. These symbols appear in the form of signs, helmets, ships, wolves, goddesses. Where Thor and Zeus are scatters. These symbols always have an equivalent that is equally valuable on the other side. For example, 5 Viking helmets give 2.5 X and Greek helmets also give 2.5 X.

As previously mentioned, this slot machine has a DualSpin function. A unique and innovative feature added by 4ThePlayer. With this function, you as a player can choose between spinning the slot with a blue spin button or a red spin button. The red one represents Zeus and the blue Thor. This gives you at each spin a chance to double your winnings, in other words if you now manage to match the winning color with the spin button you chose. But something that is good is that if you choose the wrong color, you will still be able to keep the winnings, you will only lose a chance to double it. Below the playing field, you can see your history with colors that have given you a win in the past.

Something you want to get to, is the game's Win Spins. This is the bonus that has an increasing multiplier function. The fun and shrewd thing about this bonus is that each spin gives a guaranteed win. Where you start with a multiplier of 1X and for each time you manage to hit the correct color on the winning symbols, your multiplier increases by 1. To enter the Win Spins bonus, you must get 3 scatters. If you press the red spin button and get 3 scatters, where at least 2 of these are red, you get 10 Win Spins. The same applies if you press the blue button and get at least 2 blue scatters, then the win is also 10 Win Spins. If, on the other hand, you get 3 scatters but do not achieve this color requirement on each spin button, then you get 7 Win Spins. Which is still nice. These bonus rounds are progressive and you can manage to win more Win Spins as you go. This gives you a potential chance to win the crazy 15'630 X amount you bet.

Which spin button, the blue or the red?

Only by mentioning gods like Zeus and Thor, this slot machine from 4ThePlayer clearly manages to grab your attention. Once you get into it and start playing, you’ll notice that the atmosphere the game has is cool and with its DualSpin function, you get a completely new gaming experience. Where you can participate and choose which side you want to stand on. The buttons may take up a lot of space and focus, but overall, the look of the slot machine is nice. With Win Spins that give you guaranteed winnings, the experience is much better for sure. Like when Morpheus asks Neo if he wants to take the blue or the red pill. I ask you, which spin button do you choose, the blue or the red?