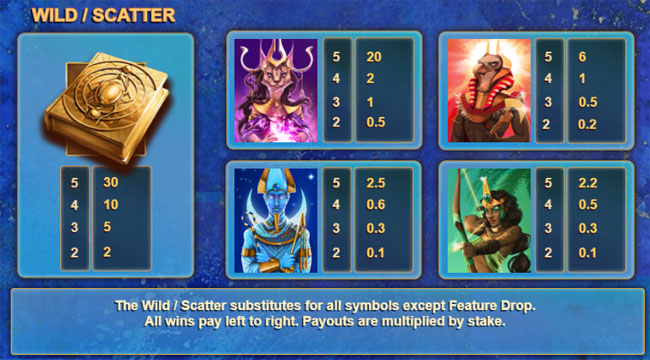 Go through the pages of the Book of

Gods video slot, and you’ll find it thrilling beyond measure. Every chapter has

its own realm, and all of them are

equally compelling in this 5 reels edition presented by

blessing on your road to secure generous prizes.

So, act quickly, and use this

advantage provided by the Egyptian gods. With 243 ways to win and creatively developed features, in no

time you’ll get to appreciate all this game has to offer. Therefore, get comfortable,

of Faith With Book of Gods

If you are a fan of ancient Egyptian

deities, then you're welcome to try the

Book of Gods video slot, surrounded by the powerful Nile River and the

pyramids. This splendid game will lead to this wonderful place, painted in

blue, gold, and sand color, and in the company of 4 gods and goddesses.

As the most powerful deity in the

Book of Gods, there is the goddess Bast. This goddess with the head of a cat and the daughter of the mighty Ra will be our guide

and helper in the afterlife. By her side, her father, the god of the sun with a falcon head will shine, and the

Osiris will rule the moon. At last, there is Neith, said to be the first among

the gods, and in this game, the goddess of Earth.

During the regular game, the book

feature gets unlocked, the gods and

goddess take the lead. Each of them will show us their own color. Bast has the

purple realm, Ra the red, Osiris claims the blue, and Neith’s it the green.

With retriggering, the god that was chosen second will take over. The exception

to this rule goes for Bast – with her, it’s always purple.

The background of reels is made in

gold, blue, and sand color with usual Egyptian drawing style, and there is a

river movement, also washed in blue. The reels are all gold with symbols in

various colors. While the reels are spinning, ancient Egyptian music is

With free spins, gods and goddesses

have the opportunity to spread on the whole reels, looking awesome, especially

the goddesses. And below the reels, for each active god or goddess, a pearl is shining.

As already mentioned above, the book

is the Wild and the Scatter, and it has the ability

to replace symbols and to unlock features.

In the base game, the book will go

through the letters, and numbers, and in order for the Symbol Cloning feature

to work, the symbol in the book needs to have the same letter or number on the

reels but in the number of 3. If it does,

with the possibility to re-trigger

the book will reveal the cloning deity.

If it takes a long time to unlock the

free spin feature, you’ll have a chance to buy it any time with Feature Drop.

will be reduced by half of your current stake.

The Book of Gods video slot will

easily get you hooked with all the excellent

ideas presented in this nicely wrapped package. With so many colors, and

much. This game, entirely made in gold, will prove to be one of a kind with

quite engaging animations and all the splendour you could hope for on the reels.