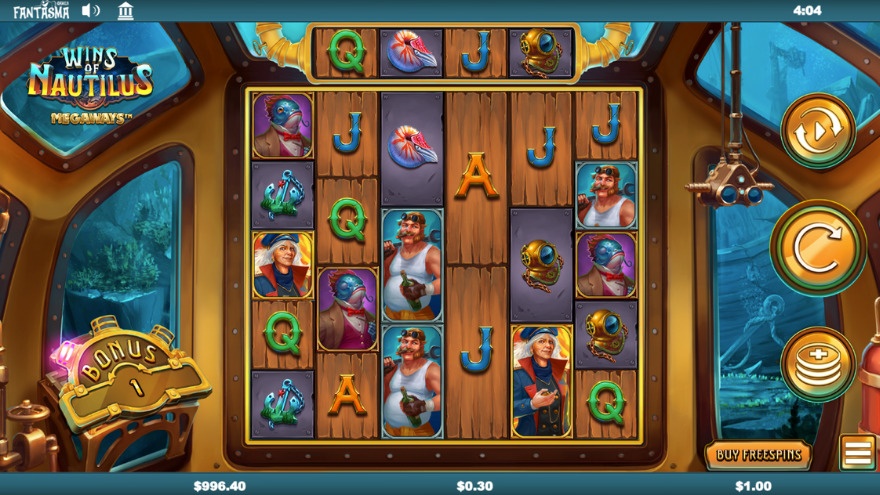 Wins of Nautilus Megaways is a new casino slot from Fantasma Games, in which we join an adventure seeking crew as they venture into deeper territory in search of hidden treasures. It is based on the theme of the fictional submarine, Nautilus, which along with Captain Nemo is featured in the novel Twenty Thousand Leagues Under the Sea. Among shipwrecks and swordfishes, there is one thing that fascinates the crew particularly and that is the nautilus that during the visit can show us the way to the bigger wins. In short, the nautilus is an octopus with a shell, which is usually said to live at a depth of 300 meters. It is a living fossil that has been on earth for over 500 million years and during these years no changes have taken place, at least in its appearance. Its shell is filled with air and helps the nautilus to stay afloat, where it can move by jet propulsion by blowing water out through a siphon. But let's not dwell too much on this fascinating species, it's time to find out what we came here for in the first place, namely, to find out what you can expect to see during the spins.

Wins of Nautilus Megaways is a video slot from Fantasma Games that features 6 reels and 2 to 7 rows. This variation in the number of rows is due to the game's Megaways mechanic, which results in that 324 ways to win can be up to 117649 ways to win. You can choose between making a Min.bet of 0.20 and a Max.bet of 20. The RTP is around the average, where in this slot we have an RTP of 96.10%. Wins of Nautilus Megaways has a hit frequency of 30.76% and a high volatility, where you can win up to 10000X the bet.

Within this exciting adventure down at the bottom of the ocean, we have a couple of great features to help us in our quest for the big wins. The features are Avalanche, Countdown Bomb, Full Reel Wild, Respin, Deep Sea Free Spins and Bonus Buy.

The game design is based on a submarine theme, where we go down to the bottom of the sea with a bunch of adventure seekers in search of big wins. In the background of the reels, you can see this submarine, where through its different glasses you can glimpse a shipwreck and see big sword fishes swimming by. It is a slot that can be played on all the devices mobiles, notepads and desktops. You create a win by landing 3 or more of the same symbol types on adjacent reels starting at the far left.

The lower paying symbols are J, Q, K and A. If you land 6 of the same symbol types, it pays between 1X to 1.5X the bet. The medium paying symbols are a nautilus fossil, an anchor and a diver's helmet. Landing 6 of the same symbol type pays between 1.75X to 2.5X the bet. The higher paying symbols are a cigar smoking man, a dressed-up fish and the captain. During your spins you can land green countdown symbols which we tell you more about in the features section and the respin symbols consist of a shark bomb. During your spins you can also land wild symbols and the scatter symbols consists of a lanternfish. Let's find out what the features do.

What is the max win in the slot Wins of Nautilus Megaways?

What features are available in the slot Wins of Nautilus Megaways?

During your spins, countdown bomb symbols can land on the reels 2, 3, 4 and 5, as well as the top reel. It can land with a countdown of up to 4 and with each avalanche that occurs, will lower this meter by 1. Then when you get it to show 0, it explodes and is left with a fully expanded wild symbol that has a multiplier equal to its starting value multiplied by 2X. If you have multiple countdown bombs on the same reel and one of them reaches 0, both of these will turn into expanded wilds where they receive a win multiplier equal to the value of both countdown bombs multiplied by 2X. If you have a countdown bomb on the upper reel and it reaches 0, it will move to the reel below before turning into an expanded wild symbol.

If you land 1 or more Respin symbols, the Respin feature is activated. These can only land on the reels 2, 3, 4 and 5, and each Respin symbol will then remove 2 to 10 non-winning symbols. This then results in the avalanche feature being activated.

You will start with a 1X win multiplier and this increases by 1X with each avalanche that occurs, and the multiplier remains during the spins and is applied to the wins that are created.

If you want to take advantage of the Deep Sea Free Spins right away, you can use the Bonus Buy feature. You then pay 60X the bet and land at least 3 scatter symbols which activate the bonus game, where the RTP increases to 97%.

Within this slot we get to join on a fascinating expedition, where together with the crew of the submarine we can scoop up festive wins along the way. It's a slot set in an exciting location, where we get to experience a detailed environment. You play a slot that has the Megaways mechanic, which can result in up to 117649 ways to win. This gigantic number of ways to win is wonderfully intertwined with the avalanche feature, which makes it possible to generate multiple wins during the same spin that takes place. Within this adventurous journey, we are treated to a delightful mix of features, where among these we have the countdown bomb symbols frequently landing on the reels with various sized countdown meters.

Once you manage to get these to land on 0, you get fully expanded wild symbols which also gain a multiplier to them that can make the wins really festive. The respin symbol can land and remove up to 10 non-winning symbols simultaneously, resulting in a great avalanche sequence. These already mentioned features also follow through to the Deep Sea Free Spins feature, where you also get to start with a win multiplier of 1X which increases by 1X with each avalanche that occurs. With the help of the respin symbols, Megaways mechanic and wild symbols, many wins can be created and thus many avalanches that can help increase the win multiplier significantly. In addition, you get a good size of free spins from the start which can also be retriggered during the game.

Fantasma Games has added the possibility to use their Bonus Buy feature, which gives the player the opportunity to for as little as 60X the bet land at least 3 scatter symbols that activate the bonus game. It is a slot that has a solid sized RTP, which increases up to 97% when the bonus buy feature is used. The high potential maximum win is also a great contribution to this adventurous slot. The countdown bomb and respin symbols add a refreshing touch to a well-used Megaways mechanic. Similar to what it's like to participate within an underwater expedition, this composition of features along with a mood-enhancing design, can generate some thrill-filled moments.

Wins of Nautilus Megaways is a slot where we follow a crew in search of some big hidden treasures lying at the bottom of the ocean, which become possible to scoop up with the help of some lucrative features.