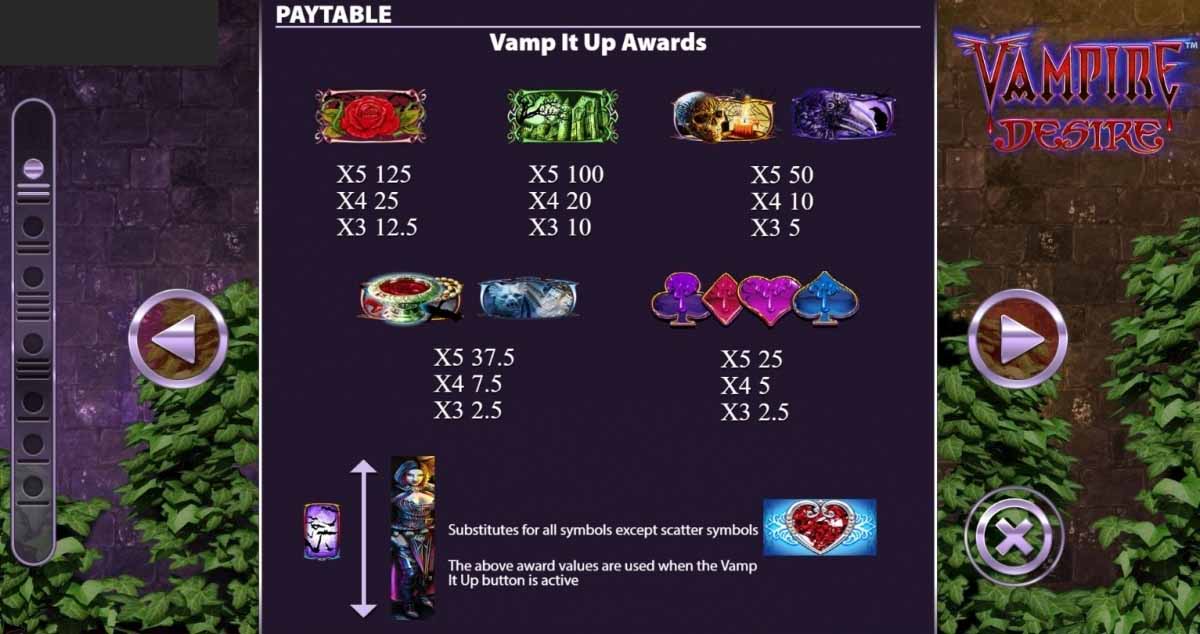 With the Vampire Desire slot brought to gamers by Barcrest, punters get to enjoy loads of fun and rewarding winnings across the game’s setup including 5 reels and between 50 paylines up to 100 paylines. As suggested by the game’s name, this release is inspired by terrific blood-sucking creatures. The game’s narrative tells an interesting gothic romance story while its bonuses’ department does not fail to impress.

Speaking of the bonuses, the Vampire Desire slot features a great collection of extras including expanding wild symbols which bring more paylines into the game. There is also the game’s Vamp It Up Bonus mode which brings re-spins for more generous winnings which go all the way up to 500x players’ stake.

Furthermore, the Vampire Desire slot is accessible via every modern device including iOS and Android-powered portable devices from just 0.10 up to 500 credits per spin. In addition to being very rewarding, the Vampire Desire slot is beautifully designed, packed with high-quality graphics and visuals for an even more immersive gaming session from the very first spin of the reels.

When it comes to the game’s visuals and audio, players will be positively surprised with what the Vampire Desire slot offers in this department. Since the game has a vampire theme, its backdrop shows a creepy old castle located in the distance which perfectly matches the game’s WMS-powered iconic backing sounds. The reels look transparent which surely adds more to the generally horror effect that goes on across the reels.

Speaking of the reels, they include a neatly rendered collection of symbols such as higher-valued red roses, castles, skulls, and blue and purple monsters. Other than these symbols, punters will also come across lower-valued symbols depicted as diamonds, clubs, spades, and hearts. The most rewarding standard symbol is the red rose bringing winnings worth up to 5x punters’ stake for five matching symbols on a payline.

As players come to the dark side with the Vampire Desire slot, they do not only come across gothic-styled standard symbols, but also a great collection of special bonus symbols including the game’s wilds which in this game have the ability to expand across the reels and turn the reels into fully wild feels which natural bring more winnings. Aside from wilds, players can also benefit from bonus red heart symbols that activate the game’s Lock It Link mode.

When it comes to the game’s bonuses, players get to benefit from the Vampire Desire slot’s Vamp It Up bonus, Mighty Reels bonus and Lock It Link bonus. The game’s bat wild symbols are expanding wilds which land as bigger 2×2 symbols on the game’s three middle reels. Once they land, they trigger the game’s Mighty Reels mode which further brings wild reels. Moreover, this mode increases the game’s number of paylines from 50 up to 100 for a better winning potential.

Then, there is the game’s Vamp It Up mode which can be played only when investing at least 2 credits per spin. Playing at this stake offers players the opportunity to buy this feature or to wait for a winning combo worth over 2.5x players’ stake which will also trigger the bonus. Once triggered, players spin a massive wheel which brings generous winning multipliers worth up to 5x players’ stake or automatically accesses the game’s Lock It Link bonus.

This bonus can be also triggered by landing three or more scattered heart symbols on the game’s bottom reels. The bonus grants 3 re-spins in addition to several extras. The game’s heart symbols become special gold symbols while the game’s red and blue hearts once landed on the reels remain locked in their position. Moreover, they also bring generous multiplier values which can eventually lead to top payouts of 500x players’ stake.

With so many different bonuses included, entertaining gaming sessions and rather appealing visuals, the Vampire Desire slot is surely worth checking out especially by punters who are not afraid of spooky, horror vibes and the game is definitely more on the dark side. All in all, Barcrest has once again excelled and brought something different despite using a rather common theme.