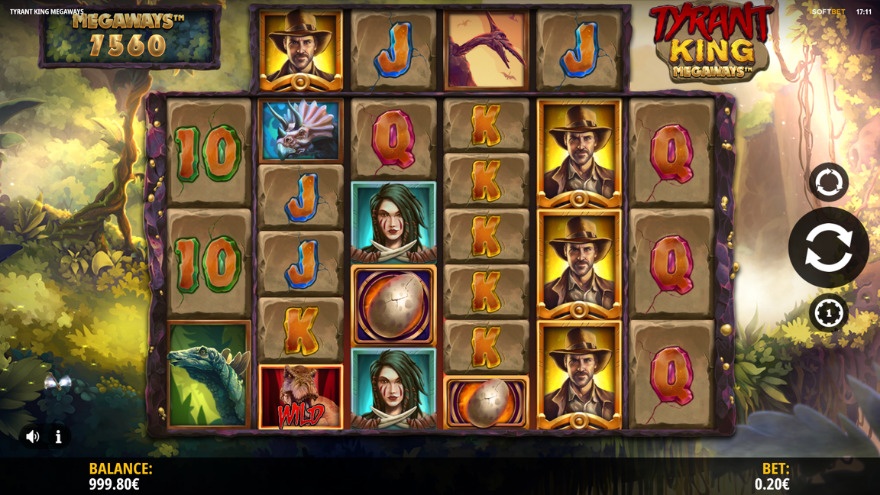 Tyrant King Megaways is a new casino slot from iSoftBet where we travel back to the time of the dinosaurs. A place and time where these giant beasts ruled, and it clearly feels unreal that they have walked on the same earth as us. Instead of recreating this dinosaur-filled world as they did in Jurassic Park, this time we have had the chance to travel back in time to them. Just as it is risky to stay among these creatures, it is reflected in the high volatility that exists. But during those spins, the lucky player can win up to an incredible 50000X the bet.

This game provider recently released another slot with the Megaways mechanic, where we could take part in some fine prizes together with the mighty god Thor within the Wild Hammer Megaways. But even if the Megaways are the same and also the potential maximum win, there are a bunch of other great features that we can take advantage of as well. So, let's dive into this fabulous world and discover what's in there.

Tyrant King Megaways is a video slot from iSoftBet that has 6 reels and 2 to 8 rows. This variation in the number of rows is due to the game's Megaways mechanic, where it can give up to 200704 ways to win within the Free Spins feature. In the base game you can get up to 117649 ways to win. You can choose between making a Min.bet of 0.20 and a Max.bet of 20. The game's RTP is slightly lower than the average where we have an RTP of 95.99%. Tyrant King Megaways has a hit frequency of 21.0%, where together with a high volatility (9.5/10) you can win up to 50000X the bet. The chance to activate the Free Spins feature is 1 in 340 and the Tyrant King Respins feature is 1 in 154.

In this game adventure among dinosaurs, we have a bunch of exciting features to help us in the hunt for the big wins. The features are Wild Symbol, Cascade, Wild Tyrant Respins and Free Spins.

The game's design consists of a dinosaur theme, where we get to meet several of these giant creatures in a very dense and lush jungle. Above the reels is a top tracker, where it will add a symbol to the reels 2, 3, 4 and 5. In the background of the reels you see a very green place, where fireflies fly peacefully around, and the sun's rays penetrate the dense jungle. You can play this slot on the device’s notepads, desktops and mobiles. You create a win by landing 3 or more of the same symbol types on adjacent reels starting at the far left. The wild symbol and the Indiana Jones-like symbol pay already after you land 2 of them, giving 2X the bet.

The lower paying symbols consist of 10, J, Q, K and A. If you land 6 of the same symbol types, it gives between 0.8X to 1.75X the bet. The higher paying symbols consist of three dinosaurs, a savage woman and an adventurer with the classic fedora hat. The game's wild consists of a t-rex and the big egg is the game's scatter symbol. Let's find out what the features do.

What is the max win in the slot Tyrant King Megaways?

What features are in the slot Tyrant King Megaways?

The game's wild symbol helps to create more winning combinations by substituting for other symbols. The only symbol it doesn’t substitute for is the scatter symbol. It can only land on the reels 2 to 5.

When you spin the reels and land 1 wild symbol on all reels 2, 3, 4 and 5, the Wild Tyrant Respins feature is activated. You will then be given 3 respins, where you only can land wild symbols. This is a feature that can be activated in both the base and the bonus game. Each time wild symbols land, they are locked in position along with the wild symbols you had at activation, then the number of respins will be reset to 3 again.

As before, the wilds can only land on reels 2, 3, 4 and 5, and if you fill an entire reel with wilds, you get a multiplier. The size of the multipliers is based on the number of wilds on the filled reel. When you have used all the respins, it will land paying symbols that bring winnings along with the wilds.

When you spin the reels and land 4 scatter symbols on reels 2, 3, 4 and 5, the Free Spins feature is activated. You cannot land scatter symbols on the top tracker or the outer reels 1 and 6. Once you have activated the Free Spins feature, you are welcomed with 10 free spins and each time a scatter symbol lands it gives 1 extra spin. Before these spins are made, a bottom tracker will be added, where this extra tracker results in you being able to get up to 200704 ways to win.

When you create a winning combination, the win multiplier starting at 1X will increase by 1X. This multiplier can increase indefinitely, and it stays during the remaining spins, where the current multiplier will be applied to the winnings created. During these spins, you can also successfully activate the Wild Tyrant Respins feature by landing a total of 4 wilds on the reels 2, 3, 4 and 5.

This is a slot where the atmosphere is set very quickly, where we dive into a deep and dense jungle. To a place where a large number of dinosaurs and exciting features are waiting for us. During the base game we get to take part in wonderful spins, where you get to take part in an as usual wonderful synergy between the cascade and Megaways mechanic. This will be extra good in combination with the wild symbols which helps to create more winning combinations by substituting for other symbols. But by landing 4 wild symbols on the reels, the adventure becomes much more exciting. Since the Wild Tyrant Respins are activated, and this feature provides the conditions for landing large amounts of wilds on the reels. If you also fill an entire reel with wilds, its reel receives a multiplier whose size is based on the number of wild symbols it holds. Once you have used the respins and hopefully have built up a big cluster of wilds, you will get paying symbols to land with them. This can result in a gigantic win, which becomes incredibly exciting every time it happens.

The Free Spins feature increases the number of ways to win that you can get to 200704, where you also get to take part in a win multiplier that increases with each cascade that takes place. What makes this feature extra lucrative is that it is again possible to activate the Wild Tyrant Respins within it. There is a very high volatility within this slot, where sometimes many spins may be required before winnings are generated. But iSoftBet has added a very generous potential maximum win of 50000X which adds an extra thrill to the spins that are made. The environment in which this slot takes place creates an enormous excitement that fits perfectly with the adrenaline-filled features that you can take part in during the spins.

It is a captivating music that is played, where its tempo changes depending on the events that take place and the effects when the symbols land create an extra good atmosphere. It may not be a slot that is completely groundbreaking in terms of its features, but the composition with its features, theme and mechanics are very skillfully brought together. Where this most likely will be a favorite among many players in the future.

Tyrant King Megaways is a slot from iSoftBet where we, together with huge dinosaurs, also get the chance to take part in huge wins and design skills.