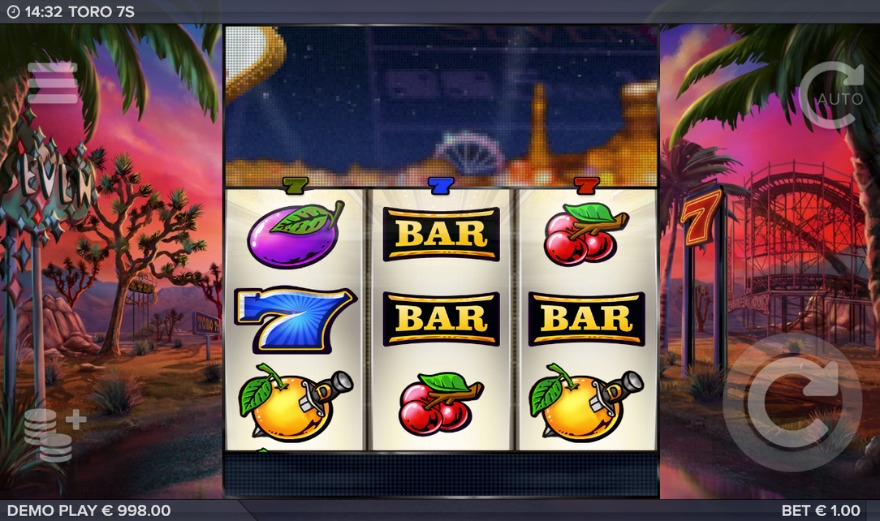 Toro 7s is a new casino slot from ELK Studios, featuring the third and final edition within their Wild Toro World Tour, which has been created to celebrate the 5-year anniversary of the Wild Toro slot. We've recently been introduced to the Toro and Matador in the Wild Toro 2 and Book of Toro slots, where unique twists resulted in epic gaming moments. This time, ELK Studios is letting the Toro make his first appearance in the ELK Classic Series. Where players will be treated to a 3X3 slot with high volatility that can generate wins of up to 10000X the bet. Let's find out what else you can expect to see during the spins.

Here we get the chance to take part in another exciting gaming experience with the Toro and Matador, where with the help of some great features we can scoop up the big wins. The features are Nudging Wilds, Free Spins, Lucky Sevens and X-iter.

The design of the game is based on a theme where we once again meet the Toro and Matador, this time going to a Las Vegas-like location. In the background of the reels, you can glimpse a roller coaster, where every sign hint at sevens. During the spins, the music is atmospheric, with a base and electric guitar as the main instruments, accompanied by fierce drumbeats. You can play this slot on all the device’s mobiles, notepads and desktops. You create a winning combination by landing 3 of the same symbol types on adjacent positions starting from the leftmost reel.

What is the max win in the slot Toro 7s?

What features are available in the slot Toro 7s?

The game's wild symbols help to create more winning combinations by substituting for other symbols, except for the scatter symbol. During the spins you can land the multiplier Toro on the reel 3 and then activate the Nudging Respin feature. This symbol will then nudge down one step at a time, with a respin being obtained at each step taken until it has moved off the reels.

The Matador can land on the reel 2 and this will also nudge down one step at a time, with a respin being awarded for each new step taken, until it disappears from the reels.

If you land 3 scatter symbols within the Free Spins feature, the Lucky Sevens feature is activated. You will then receive 3 spins and within this feature, the green, blue and red sevens will be collected on reels 1, 2 and 3 respectively. When you create a line win or land the correct seven symbol on the correct reel, the number of spins is reset to 3 again.

During this feature you can collect a maximum of 5 of each color on the seven symbols and when you run out of spins, you will receive a prize corresponding to the number collected.

If you collect 4 green and 4 blue seven symbols, you will receive a prize of 1500X the bet.

If you collect 4 blue and 4 red seven symbols, you will receive a prize of 2500X the bet.

If you collect 5 of all colors, you will receive the highest win of the game at 10000X the bet.

You can choose to use the X-iter feature, which allows you to take advantage of 5 different options that require different sized payments.

5X = You get to take part in a spin, where only cherry and seven symbols can land.

10X = You get to take part in a spin, where you are guaranteed to land the Matador or the Toro.

25X = You get to take part in a spin, where only cherry and seven symbols can land. In addition, you are guaranteed to land the Matador or the Toro.

500X = You activate the Free Spins feature and in addition, the multiplier will increase with each spin and respin that occurs.

Here we get to see the third and final slot within their Wild Toro World Tour anniversary, where they tie the knot in an elegant way. Unlike the two previous versions, they choose to use a much smaller playing field within this slot. Where we play on a slot with 3X3 reel setup, but this smaller size should certainly not be underestimated, as potent spins with big wins can be created. ELK Studios has on several occasions in the past created smaller sized slots, such as in their Knockout Diamonds, where gigantic hits could be created. Just like in the previous versions, the Toro and the Matador are also present in this slot, where they both act as wild symbols. The Toro also comes loaded with a win multiplier and when either of these lands, it activates awarding a respin with each nudge that occurs. If you land both of these wilds at the same time, your chances of winning big will increase significantly. Then the Toro gets locked in its position, until the Matador has finally nudged outside the reels.

By landing 3 scatter symbols, the Free Spins feature is activated. You get 10 free spins which together with a 5X win multiplier can create a lot of decent wins and furthermore this multiplier can be combined with the Toro multiplier. By landing 3 scatter symbols within this Free Spins feature, the real adventure begins. Then you can collect seven symbols, which can give wins of up to 10000X the bet. This 10000X win is the game's highest potential maximum win, which is a very good size that has been seen in most previous slots from this game provider. Again, a lower RTP is used, but unlike many slots released these days, this RTP is a steady 95.0% across all different game operators. It's a slot that at first has a small and innocent appearance, but during the spins it proves to be very entertaining. Where they have squeezed in a lovely mix of features to this new slot that will be a great addition to their ELK Classic Series collection. It's been a festive 5-year anniversary to follow within the slots Toro 7s, Book of Toro and Wild Toro 2, where playful but innovative and cleverly created mechanics have been used in all versions.

Toro 7s consists of a smaller 3X3 slot but its smaller size should certainly not be underestimated, as it is filled with festive features that can generate huge wins.