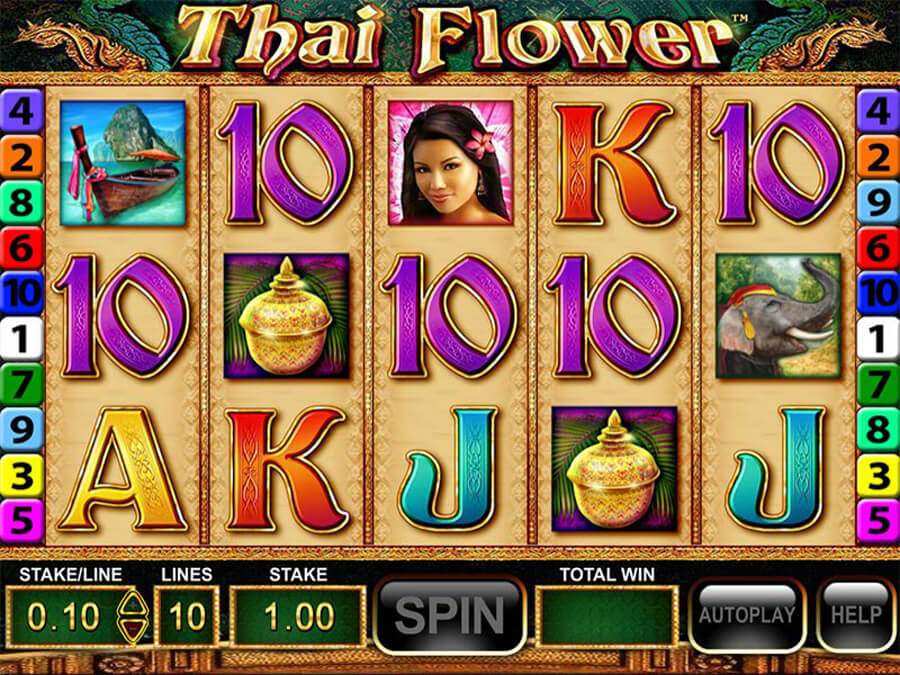 
Thailand is renowned for its captivating coral reefs and amazing cuisine. If you have never been to Thailand, you will find the visual design of the slot satisfactory, but the same cannot be said for those who have visited the country and thus have an expectation of what to expect as they start to play. This game is quite an interesting way to pass time and make money at the same time. The game also has an auto spin function which allows a gamer to play without necessarily being in front of the screen.


Thai Flower slot is one of Barcrest’s creations that use the fixed 10 win-line system. To create a balance, players can wage a wide range of bets. A display of the Thai lady means that a player has achieved the highest payout symbol. The highest payout is 1,000 coins for 5 identical symbols on a single payline, followed by 200 coins when 4 symbols appear. When a player’s winning combination includes the Thai lady, this is followed by an animation featuring a spinning umbrella and zooming out. The next high-paying symbol of this game is the elephant or mansion which will both pay 500 coins when 5 symbols appear on a single payline. The incense and boat symbols follow in the sequence, paying 250 coins for 5 symbols. Playing card symbols are the least yielding, but even such small wins can be important for a player.


The minimum value of a bet to play the Thai Flower slot is 0.10 (0.01 per line), but this can be of higher value, up to 50 per line. With an auto-play function, players can try their luck with 50 spins without having to be involved until the round is over. Offering an

of 95%, players always have a chance of winning large in this game.

Bonus functions and other features


The most sought-after bonus features of this game are the wild and free spins. The wild, which is activated when any 3 lotus symbols appear on reels 1, 3, and 5, can substitute all other symbols on the reels but can only be achieved in the base game. The fact that only 3 of the total 11 symbols in the game are used to activate a win makes the game’s winning potential rather high. The bonus award or free spins for this game is 12 free spins, which must be played on a different set of reels.

You will know you have hit a bonus round when the soundtrack of the game changes to traditional Thai music. When the free spins have been triggered and awarded, a set of 3 closed lotus flowers will appear on the screen. In sequence, they will open up to reveal one of the symbols within the game that are among the 3 symbols that appeared on the reels.


Thailand is an extremely beautiful country and this game has left out so many details on the attractions one would encounter in real life. The slot is, however, designed to intrigue less traveled players who probably have never been to Thailand but always wish they could visit.