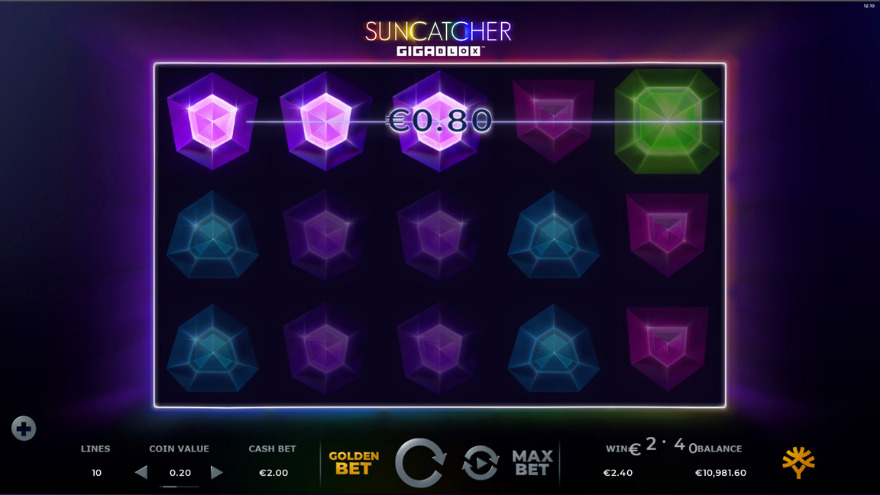 In this new casino slot from Yggdrasil, we head out to outer space in search of the big wins. A place that is usually very dark and colorless, now gets much more color as large wins are beamed out by the sun rays. We get to take part in Yggdrasil's fantastic Gigablox, which we have seen in their slots Gator Gold Gigablox and Hades Gigablox. A mechanic known for its ability to deliver giant symbols that can not only create many winning combinations but also create big wins.

This is a slot that mainly revolves around its Gigablox feature, but at the same time there are a lot of other exciting features that you can take part of. The features are Gigablox, Wild Respins and Golden Bet. As you can see, this is not a game with Bonus feature, but everything exciting can happen during the Base game instead.

The game's design consists of a space theme, where in the background of the reels is completely black. But on the reels, there are a large number of colorful symbols that light up the environment. You create a winning combination by landing 3 or more of the same symbol type that either start on the reel on the far right or on the reel on the far left. This is thanks to the game's win both ways which creates the opportunities to generate more winnings. If you are looking for mobile slots games, then this slot is a good choice as it is created to work well on both mobile and computers.

How much can you win in Suncatcher Gigablox? The default maximum win of the game is 1430X or the total amount of € 715000.

What features are in the video slot Suncatcher Gigablox? The features are Gigablox, Wild Respins and Golden Bet.

This feature helps to create more winning combinations by giving each spin at least one set of synced reels that creates big blocks. There are several different sizes that you can get where there is a minimum reel of 2X2 but where it can also be 3X3 and multiple block reels.

The Wild Symbols help to create more winning combinations by substituting for all other symbols. When they land on the reels, they will expand to cover the entire reel and then you get to take part in a Respin where this expanded wild is sticky. If you then land a new Wild on the Respin, this will also be expanded and sticky and then give you another Respin. This continues as long as new Wild symbols land on the reels. If you have filled all the reels with Wilds, you will not receive an extra Respin, but you will instead receive a prize of 500X the bet which is added to your current win.

As you can see, the game's Wild Symbols are very festive to land and to increase the chances of doing so you can take part in the game's Golden Bet. You then pay double the bet and then have a 3 times greater chance of landing Wild Symbols. This results in that the normal bet size between 0.1 to 500, instead becoming 0.2 to 1000 using the Golden Bet.

In this galactic adventure from Yggdrasil you can succeed in catching a lot of wins. There is no bonus game but instead you get to take part in spins where a lot of things can happen during the normal mode. The game's Gigablox feature can give really great wins as it can activate 2X2, 3X3 and also multiply Gigablox reels. The fact that the game has win both ways, allows the player to create significantly more winnings as winnings can be generated both from the start of the leftmost reel and the rightmost reel, provided you have at least 3 of the same symbol type on adjancent reels. The game's Wild Symbol has many tasks, as it normally helps to create more winning combinations by substituting for all other symbols. But what makes it almost spectacular is its ability to create Expanding Wilds, which will also be sticky for the upcoming Respin that it generates.

This can generate multiple Respins if many Wild Symbols land and the game's main goal is to succeed in filling all the reels with these particular Wilds. With the help of the Golden bet, you get 3 times bigger chance of landing these symbols by paying double the bet. In all slots, of course, the goal is to win as much as possible, but to succeed, it is usually necessary to activate some form of Free Spins. In this slot, everything instead depends on triggering Respins and finally with the help of the sticky Expanded Wilds that are created, fill all the reels. There is a possibility to choose from a large variety of bet sizes, which suits all types of players. With a Low/Medium volatility, the spins also become very entertaining as winnings are generated more often, where an average RTP of 96% feels acceptable. But in the long run, it feels like a game that will create a couple of interesting rounds of play but that you will easily get tired of. Perhaps the expectations were very high as their previous Gigablox slots have performed so well, but even though most of it revolves around Gigablox and the wilds, it is difficult to shake off the feeling that something is missing.

Suncatcher Gigablox is a slot where the player in a space adventure can catch big wins with the help of exciting features such as Gigablox and Wild Symbols, which also expands and gives Respins.