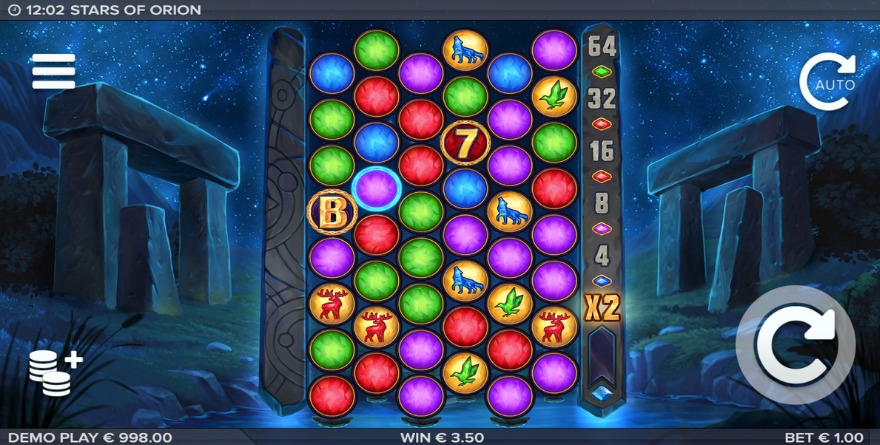 Stars of Orion is a new casino slot from ELK Studios that takes us on a fascinating intergalactic adventure. Orion is one of the clearest constellations that can be seen in the night sky, where it is named after a hunter and with a good dose of imagination, you can see that the constellation reflects this hunter. The space is indeed an incredibly fascinating and mysterious place, where its stars and planets are said to have greater powers and influence than we can imagine. In Greek mythology, for example, the Titans were said to be summoned if the planets were aligned, this time the Stars of Orion are shining extra bright, so let's find out if that can have any positive impact.

Stars of Orion is a video slot from ELK Studios that has 6 reels and 8 rows. You create a winning combination by landing a cluster of 5 or more of the same symbol types. Where winning symbols disappear from the reels and with the help of the Gravity mechanic, the remaining symbols will slide down to the positions at the bottom. You can choose between making a Min.bet of 0.20 and a Max.bet of 100. This is a lower-than-average RTP, where in this slot we have an RTP of 95.0%. It is a high volatility, where the lucky player can win up to 10000X the bet.

Within this star-studded gaming adventure, we have a bunch of great features to help us in our quest for the big wins. The features are Wild Symbol, Avalanche, Magic Meter, Win Multiplier, Super Symbol & Cluster, Magic Features, Free Drops and X-iter.

The design of the game consists of a star theme, where we can observe the brightly shining Orion in a very starry place. You can play this slot on all the device’s desktops, mobiles and notepads. You create a winning combination by landing 5 or more of the same symbol types in a cluster.

What is the max win in the slot Stars of Orion?

What features are available in the slot Stars of Orion?

The game's wild symbol helps to create more winning combinations by substituting for other symbols, except for the scatter symbols.

As you create wins, these symbols will help to increase the Magic Meter. By collecting enough symbols, you will be able to take advantage of the Win Multiplier and Magic Features.

By filling up the Magic Meter, you can take advantage of different Win Multiplier sizes that are applied to the wins created. The Win Multiplier can show 2X, 4X, 8X, 16X, 32X and 64X, which can help generate festive wins.

During the spins, some symbols can be randomly assigned a blue frame, which makes them super symbols. All symbols within the winning cluster with the super symbol and adjacent cluster, will have their symbols exchanged for the highest paying symbols.

When you fill up the Magic Meter, the Win multiplier will be activated, and you will also be able to take advantage of the Magic Features. These are and do the following:

Orion = 13 wild symbols land on the reels, shaped as the whole Orion.

When you land scatter symbols, these will remain on the reels during the wild drop.

If you land 3 scatter symbols, the Free Drops feature is activated. You will then be welcomed with 10 free drops and within this bonus game, the progress on the Magic Meter will stay between the spins being made. You can land super scatter symbols, which have red frames around them. If you land 3 of these, then the super bonus game is activated where you are greeted with 10 free drops and the super symbols land more frequently.

5X = You receive a spin that is guaranteed to generate a win.

10X = You receive a spin where the chances of landing super symbols increase.

25X = You receive a spin where you also get 3 Symbol Swap features.

100X = You activate the Free Drops feature with 3 scatter symbols.

From having us fully focused on a raging Toro and his companion the Matador, this time ELK Studios makes us look up at space. It's a dark night that makes the stars shine extra bright and among them you can see Orion. It's a slot that's packed with a lot of exciting features, where we once again get to enjoy a slot with Avalanche and Gravity mechanic. Something that we have taken part of before in, among others, Cluster Slide, which with its innovative mechanics quickly became a favorite among many. It is again a larger reel setup that we get to take part in here, whereby creating winning clusters you gradually fill up a Magic Meter. By filling up the right amount on this meter, you get to enjoy the Win Multiplier and various Magic features, where its symbol swap and dropping of wilds shaped from the Orion, helps generate big wins.

The background shows a sky filled with stars and once on the reels you can take part in symbols in brightly shining colors. The symbols feature various animal motifs and the lucky 7 pays very well if you land 15 or more of these and ELK Studios has once again set a high standard for the potential maximum win. There is a very high volatility combined with a lower RTP of 95.0%, which makes the conditions a little more difficult as a player, but overall, there are well-calibrated features to look forward to enjoy. Once the winning cluster is created and the Avalanche kickstarts, there can be many subsequent wins during the same spin. The super symbols make things more interesting, where large clusters of high paying symbols can be generated during the course of the game. There is a very pleasant and beautiful design used within this slot, where their high skill in game creation is once again confirmed.

Stars of Orion is a slot from ELK Studios, where they apply the magnificent Orion to the reels which together with other features can generate big wins.