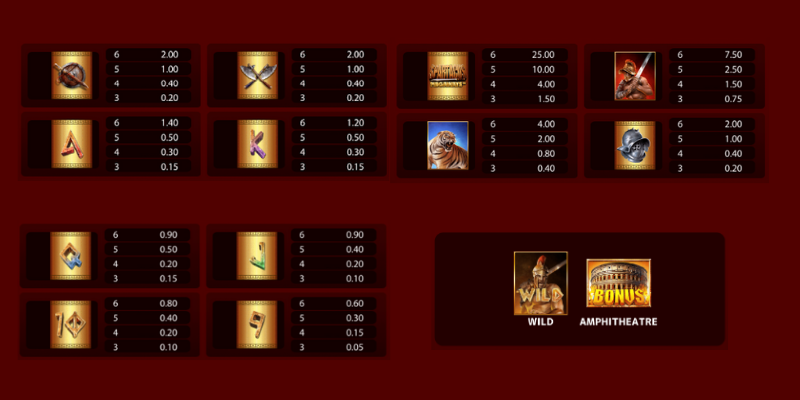 Are you ready for insanely many paylines?

SG Digital comes here with a new slot machine, namely Spartacus Megaways. For those of you who are familiar with Megaways, you know that it will mean a lot of different paylines. In this game you have the opportunity to get up to 1'000'000 paylines! Where you play with 6 reels, where reel 1 and 6 can have rows between 2 and 10. Reel 2,3,4 and 5 can show 2 to 9 rows. Despite the large amount of winning opportunities, the game has a maximum win of 12'500 X the amount you bet as well. Where you have Min.bet at 0.20 and Max.bet at 20. Like the other Megaways games, this edition also has a high volatility and it comes with a RTP of 96.32%.

This game takes us to a time when the huge Roman Republic ruled, where it was a generally good and fantastic time for many. But as always, there are two sides to the coin, and despite the glamorous facade that had characterized the Roman Empire for a long time, there was also much dissatisfaction among many. Spartacus was one of the many slaves who managed to escape. He gathered a large army of disgruntled people and together they fought for their freedom. From all of the years they ruled, the Roman Republic had managed to amass a huge amount of treasures and jewels. Which you, along with Spartacus and his army, can seize in this action-packed slot machine.

SG Digital is back with a new slot machine that contains the gaming function Megaways. Where, among other things, they have developed Monopoly Megaways before, it feels good that they are back with a game that has a similar structure but with a completely new topic. From a previously more child-friendly cartoon character, to these bloody designed fighters, they are clearly testing a new type of Megaways, which feels very interesting. Known for their incredible technology in gaming development, they once again show that this is their thing. User interface design that is just as good no matter what device you are playing on.

One slot machine, one Spartacus and a lot of winning opportunities

The Roman Empire has always been a fascinating epoch. Where the movie Gladiator really caught the interest of many, it was after this that series and movies began to appear more and more on the screens. Spartacus is a great example of how the structure of a series should be, with a lot of action, revengeful people, riches and much more. Therefore, this particular slot machine becomes extra fun to play. The background is dark red and patterned. Where red and gold are what adorn the majority of the game. The game consists of 6 reels, where you can get different numbers of rows on these reels. Below is a bottom reel with 4 rows. To the right of the reels you will see a calculator that shows how many Megaways you can achieve during the current spin that you make. It is the Megaways feature that contributes to the game's unpredictability and creates its charm. The music in the game is very evocative and you become extra motivated to spin on. When you spin and have 3 bonus symbols, the tempo of the music increases and you become extra eager to hit the 4 bonus symbols. So, make sure you have the sound turned on and spin your way through this amazing Megaways.

Free is good, and it really applies to free spins

This game comes with as many as 14 different symbols. Where the first lower paying symbols consist of the classic 9, 10, J, Q, K and A. These are very common in the game. So, despite their lower value, they can for sure pay out smaller amounts much more often. Battle axes, swords with shields and helmets as slightly higher paying symbols is something you will see quite often as well. We then have a tiger symbol and Spartacus himself. With a Spartacus Megaways symbol as the highest paying one. Then, finally it is two symbols left that consist of a wild, where you see a fighting Spartacus and finally a bonus symbol in the form of the Amphitheatre, a scatter in other words.

These Wild symbols replace all other symbols except the bonus symbols. Where they can appear on reel 2, 3, 4 and 5. The wild symbols can cover an entire reel. This is when it lands on an active part of the main reels. This also means that the curtain for that row shows what is hidden behind it. The scatter symbol can appear on all reels, where you need to get 4 to activate the free spins feature. When you land 3 scatter symbols and the last reels spin on, the music increases and the mood becomes more intense in the hope that you will succeed in getting 4 scatter symbols. As mentioned, there is a bottom reel with 4 rows, but on this the Scatters or Wild symbols do not appear.

So, this is the Megaways slot machine that can give you up to an incredible 1,000,000 paylines with up to 12,500 X. To get closer to this winning opportunity, it's best to keep your fingers crossed to get 4 scatter symbols and unlock its freespin feature. Once inside, you must spin the wheels to be rewarded with either 6, 10, 12, 14 or 16 free spins, as well as obtaining a random configuration and appearance of the curtain. This curtain remains the same throughout the freespin round. The winning opportunities are the same as before the free spins feature. The number of free spins you received at the beginning of the round, you can get again. But this time by getting 3 Scatters. Lets spin those reels!

Are you ready to join the battle of Spartacus?

The slot machine, where you as a player open your eyes extra much when the word Megaways appears, then becomes extra happy once you read about the game and realize that it gives an opportunity to get the incredible 1'000'000 paylines. The Spartacus cool and atmospheric music along with a lot of action. All these possible winning opportunities, together with all the symbols, lead to not all combinations making you bored. Spartacus Megaways invites you to a real adventure. You may not have to fight on real moneydom like Spartacus, but you can fight on real money spins and the big wins.