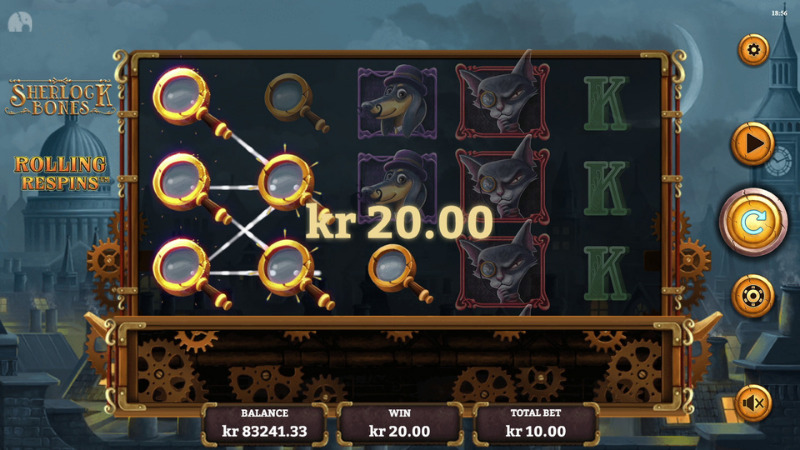 Max win, RTP and Information for the slot Sherlock Bones

With Sherlock Bones, Electric Elephant here comes with a slot that has a little twist regarding the original detective. We get to follow the master detective, who in this case is a dog, in search of the big wins. You play on a slot that has 5 reels and where the number of rows varies between 3 to 7. This results in the number of paylines will vary during the game from 243 paylines up to 16807 paylines. You can choose between making a Min.bet of 0.20 and a Max.bet of 100. In Sherlock Bones, the RTP is 96.21% and a medium volatility. The maximum win has not yet been announced so we will update it as soon as we have more info.

It is on a dark and rainy night that this slot has been placed and many exciting symbols are waiting to land on the reels. The lower paying symbols consist of the royals K and A. The medium paying symbols consist of 2 objects that are close to the heart of the master detective, namely a magnifying glass and a smoking pipe. The higher paying symbols consist of a paw imprint, a Watson-like dog and a Moriarty-like cat. The game's wild symbol consists of Sherlock himself and this symbol has a big impact on how big your winnings can be during the game. Namely, it can become both an expanding wild and a walking wild and help to enable even more winning combinations. Let us find out which features you can take part in.

The expanding reels feature significantly increases the number of paylines

In this slot we meet the master detective Sherlock, who in this case is a dog. Where during the foggy night we get to spin the reels in the hope of solving the riddle to take part in the big wins. The clues point out that it is the four different features that can help us with this. These features are Expanding wilds, Walking wilds, Expanding reels and Rolling respins.

During the spins that are being made, it is really the wilds that are in the main focus. They help to create more winning combinations by substituting for all symbols. They can only land on the four reels on the far right, which are reels 2, 3, 4 and 5. It is when you have managed to land at least one wild on the reel that the game really starts, because then you will unlock one extra bonus reel which is placed under the main reels. This bonus wheel will be able to show bone symbols and you want these symbols to land under the wild symbols.

If you succeed in landing a bone symbol under a wild symbol, the Rolling respins feature is activated. Where the wild symbol will jump to the left after each respin and the rows will increase by 1, to a maximum of 7 rows.

The expanding symbol continues to grow by 1 position in height per respin made and jumps to the left. It is sticky and stays on the reels until it finally jumps out to the far left. The great thing is that you continue to get respins as long as there are walking wilds on the reels. During these respins, you can in the same way as before succeeding in activating more walking wilds, which increases your chances even more to get winning combinations. You start with 3 rows and these can be up to 7 rows. This means that 243 paylines can increase up to 16807 paylines. As a little extra nice touch to the spins that are being made, the wilds come with another feature. If you land a wild symbol that does not get a bone symbol under it, it will expand upwards, but it will not get sticky.

Sherlock Bones is a slot that has 5 reels and 3 to 7 rows. Where this variation in rows results in that 243 paylines can become 16807 paylines. We get to follow this master detective in the search for the big wins and the wild symbol, which consists of Sherlock Bones himself is a great help for this. During the game, you can take part in a number of wonderful features which are Expanding wilds, Walking wilds, Expanding reels and Rolling respins. When you land a wild symbol, an extra reel is activated where a bone symbol can land and if you succeed in landing this bone symbol under the wild, then the Rolling respins will be activated. During this Rolling respins feature, you will see both expanding reels and wilds, where the respins last as long as there are walking wilds on the reels. Sherlock usually has a lot of exciting missions, which is certainly true here as well, where every spin in the slot gets exciting, as a small wild symbol can have a big impact in the end. Clean your magnifying glass and join an exciting search for the big wins.