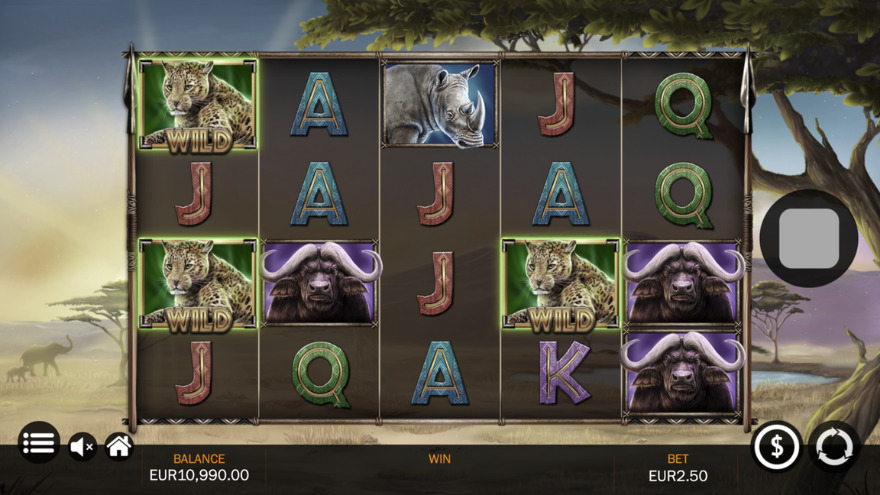 Savanna Roar is a new casino slot from Yggdrasil together with Jelly, where we head to Africa's adventurous savannah in search of the big wins. It is a place where a giant fauna of different animals exists, and this large amount is also reflected in the game's features. Where the different animals contribute with different characteristics that certainly make the game experience more interesting during the spins.

Although there are savannas on several different continents, it is the African savannah that is without a doubt the largest. Where about half the continent is estimated to consist of savannah and thus results in many animals living there. It is certainly a recurring theme, where we got to take part in Gator Gold Gigablox recently, resulting in a pleasant stay, let's find out what this safari has to offer.

Savanna Roar is a video slot from Yggdrasil and Jelly, which has 5 reels, 4 rows and 1024 ways to win. You can choose between making a Min.bet of 0.25 and a Max.bet of 100. It is an RTP that is slightly higher than the average, where it is an RTP of 96.56%. You are estimated to average a hit at every third spin made, as it has a hit frequency of 33.57%. It is a medium/high volatility, where the lucky player can win up to 10459X the bet.

Within this exciting wildlife, we have a bunch of great features to help us scoop up the bigger wins. The features are Wild Symbol, Wild Leopard Spotted, Rhino Stampede, Buffalo Charge, Untamed Elephant Spotted, Respins, Mystery Symbol and Free Spins.

The game's design consists of an animal theme where we are on the savannah of Africa. In the background of the reels, you can see a calm and peaceful savannah, where the birds fly free and elephants wander around. Where this background like the symbols on the reels is beautifully created, with carefully designed details that really create a professional feel to the spins that are made. You can play this slot on mobiles, notepads and desktops. You create a winning combination by landing 3 or more of the same symbol type on adjacent reels starting at the far left.

What is the max win in the Savanna Roar slot?

What features are in the Savanna Roar slot?

The game's wild symbol helps to create more winning combinations by substituting for other symbols. The only symbol it doesn’t substitute for is the scatter symbol.

During your spins, any of the modifiers Wild Leopard Spotted, Rhino Stampede, Buffalo Charge, Untamed Elephant Spotted or Respins can be randomly activated.

When activated, all leopard symbols on the reels will turn into wild symbols.

This will randomly select reel positions that become mystery symbols.

When activated, buffalo symbols can spread to adjacent reel positions.

This can turn an elephant symbol into 3X3 in size.

This will lock scatter symbols that have landed on the reels and then you will receive a respin. If you succeed in landing another scatter symbol, you will receive yet another respin. Where this increases the chances of activating the Free Spins feature and getting more scatters that provide better conditions.

During your spins, mystery symbols can land on random positions. These will then display the same symbol types, where all symbols except scatter symbols can be displayed.

If you land 6 or more scatter symbols, the Free Spins feature is activated. You can take part in different number of free spins depending on the number of scatters that landed on activation, where the following applies:

During the spins, you can trigger extra free spins by landing 6 or more scatter symbols, where you get the same number of free spins as when activating the bonus feature.

If you land 5 or fewer scatter symbols, the Savage Lion modifier is activated. Then all scatter symbols will turn into wild symbols, which can generate giant winning combinations.

During your spins within this bonus, you will receive the Wild Leopard multiplier. Where all leopards have wilds with a multiplier of either 1X, 2X or 3X. When you create a win, this multiplier will be applied to all paylines of which it is a part of.

Like how the savannah is full of fascinating animals, so is this slot packed with various exciting features. Where the majority of features consist of modifiers that can be randomly activated during the spins that are made. When activated, you can take part in wilds, mystery symbols and giant symbols. When activated, the chances of winning big increases and winning big are certainly something that you could succeed with in this slot as it is a potential maximum win at an incredible 10459X the bet. It takes many scatter symbols to succeed in activating the Free Spins feature, as you need 6 or more and the more you land, the more Free Spins you get to take part in.

If you land scatter symbols during the base game, a respin feature can be triggered that will respin all reels that don’t have a scatter symbol on them. Where this increases the chances of being able to activate the feature. Once you have landed the right amount required to activate the bonus feature, you are truly up for a treat. It is again possible to get more free spins and if you don’t land the right amount, the scatter you have landed will turn into wild symbols. Where you at least get to take part in more winning combinations and wilds is really the star in this feature. Since you also get to take part in the Wild Leopard multiplier which helps to create more winning combinations by substituting for other symbols and it also lands with a multiplier of either 1X, 2X or 3X which truly spices up the presence.

There are many features that you can take part in, all of which go straight on point with their features. Since there are so many of them, you will not be bored, instead it will be an exciting discovery, like a safari, where sudden valuable hoards with animal symbols can be seen. It is a fantastically skillfully created design that you get to take part in, where they haven’t left anything to chance, apart from the winning opportunities.

Savanna Roar is a slot from Yggdrasil and Jelly, where we get to take part in a wonderful safari, where the slot have many wonderful features to show us during the visit.