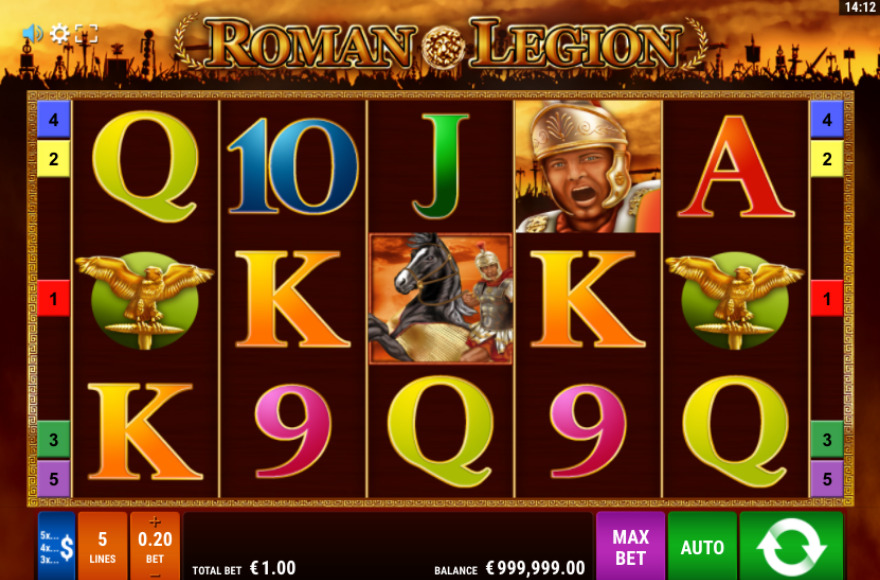 Roman Legion is a classic slot from Gamomat, where we visit Rome and take part in an epic gaming experience. Within this slot, with the help of sticky wilds we can march towards some BIG WINS that can make the stay very festive. The game was released back in early 2014 and has since been played numerous times by players worldwide, where despite its now perhaps simpler design, it can still generate giant thrills during the spins. Like the Crystal Ball from Gamomat, this is also a slot that deserves a review of the game's features, so let's dive into this world and find out what you can expect to see during the spins.

Roman Legion is a video slot from Gamomat that features 5 reels, 3 rows and 5 paylines. You can choose between making a Min.bet of 0.25 and a Max.bet of 5. It's an RTP that is around the average, where we have an RTP of 96.16%. The game has a very high volatility, but during the course of the game you can scoop up 2500X/spin.

Within this Roman gaming adventure, along with this mighty army, we can manage to pick up those big wins with the help of a couple of lovely features. The features are Wild Symbol, Free Spins and Gamble.

The design of the game is a Roman theme, where we follow the Roman Legion in the quest for big wins. In the background of the slot, you can see a red/yellow fog along with silhouettes of several people from this army, with swords and battle flags held high. You can play this slot on all the device’s notepads, desktops and mobiles. You create a winning combination by landing 3 or more of the same symbol types on adjacent positions starting at the leftmost position.

What is the max win in the slot Roman Legion?

What are the features of the slot Roman Legion?

The features are Wild Symbol, Free Spins and Gamble.

The game's wild symbol helps to create more winning combinations by substituting for other symbols, except for the scatter symbols.

If you land 3 scatter symbols, the Free Spins feature is activated. These scatter symbols can only be landed on the reels 1, 3 and 5, where you will be welcomed with 10 free spins. During the spins you cannot trigger extra free spins.

During the spins, any soldier wild symbol that lands will become sticky and stay on the reels during the remaining spins that are made.

When you spin the reels and create a win, you can use the Gamble feature. This feature cannot be used when you have created big wins or have used auto spins. You can then choose to use the Card Gamble or the Ladder Gamble.

Card Gamble = You can double your winnings by guessing the correct color of the hidden card. If you guess wrong, you lose your winnings and return to the base game again.

Ladder Gamble = You can climb up a ladder through this gamble feature, where each step results in a bigger win. However, if you fail a step, you will lose your winnings.

Within this slot we get to enjoy a classic gaming experience among the mighty roman legion, where a very lucrative bonus game awaits. Within the base game you play with a 5X3 reel setup, where the symbols that land pay very well. The highest paying symbol is the wild symbol which pays 500X if you land 5 of these and also helps to create more winning combinations by substituting for other symbols on the reels. It's an older slot and the design is therefore much simpler than what we are used to see on slots today. Where a darker and colorless environment appears in the background of the reels, while this is balanced by the fact that colorful symbols can land on the reels. Within the bonus game, the chances of getting big wins are significantly increased as sticky wilds can appear.

By landing 3 scatter symbols, the Free Spins feature is activated. You will then be welcomed with 10 free spins and then every wild symbol that lands will become sticky and stay on the reels. This gives you a huge opportunity to win big as this is the highest paying symbol, and it also creates multiple winning combinations. Although it has been many years since this slot was created and made available to the public, it is still widely played today. This is due to the high volatility that can generate sudden big wins along the way, where a thrilling free spin feature with sticky wilds makes this possible. They have chosen to use a good size on the RTP, where within Roman Legion it is at 96.16%. It's a slot where high paying symbols converge in a very elegant way with a festive bonus game.

Roman Legion is a slot from Gamomat, where within the bonus game we can take part of sticky wilds that with their properties of creating more winning combinations and high payouts, can give really big wins.