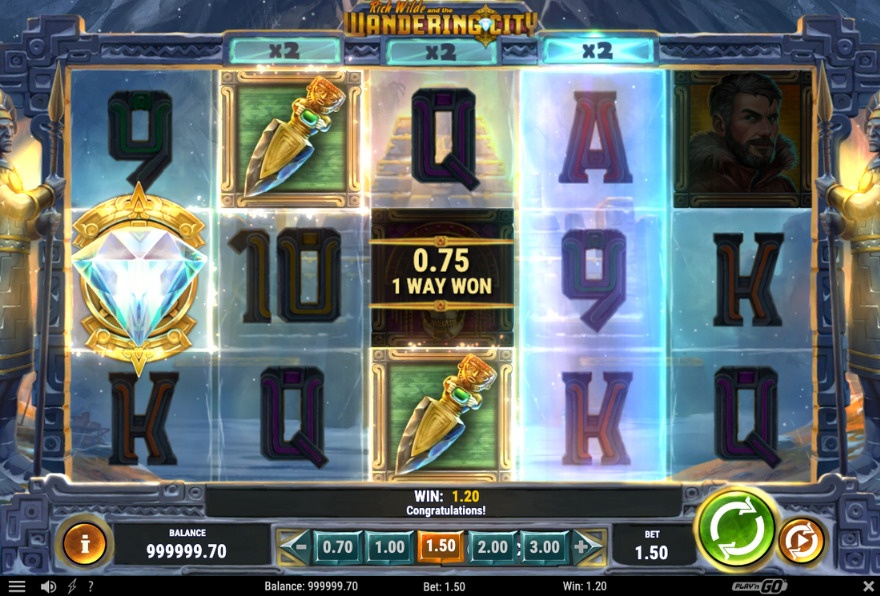 Rich Wilde and the Wandering City is a new casino slot from Play'n GO that once again takes us on an exciting adventure with this beloved explorer. Rich Wilde is certainly a person you would want to sit with around a campfire and listen to all the exciting events he has taken part in over the years. We've enjoyed slots like Rich Wilde and the Amulet of Dead and Rich Wilde and the Tome of Madness, among others. This time we travel to the Patagonia in search of the Wandering City, a city that only appears every 1000 years and which is also protected by giants. Although the odds are against Rich Wilde, this explorer has succeeded before and if all goes well this time you can scoop up winnings of 10000X the bet.

Rich Wilde and the Wandering City is a video slot from Play'n GO that has 5 reels, 3 rows and 243 ways to win. You can choose between a Min.bet of 0.10 and a Max.bet of 100. It is a slot that has an RTP of 96.20% by default, but this RTP can vary with different gaming operators, and you should therefore check what applies before you start spinning the reels. It is a high volatility (9/10), where the lucky player can win up to 10000X the bet.

Within this spectacular adventure in the pursuit of riches, we have a bunch of great features to help us out. The features are Wild Symbol, Multiplier, Free Spins and Expanding Symbol.

The design of the game consists of an adventurous theme, where we follow the explorer Rich Wilde in his quest for the Wandering City. A city said to be located between a mountain of gold and a mountain of diamonds. On both side of the reels, statues stand holding spears in a cold place where the snow is slowly falling. It is a slot that can be played on all the device’s notepads, desktops and mobiles. You create a winning combination by landing 3 or more of the same symbol types on adjacent reels starting at the far left. The higher paying symbols pay already when you land 2 of them.

What is the max win in the slot Rich Wilde and the Wandering City?

What features are available in the slot Rich Wilde and the Wandering City?

The game's wild symbol is also the game's scatter symbol, and it helps to create more winning combinations by substituting for other symbols.

When you spin the reels, multipliers can be randomly activated on the reels 2, 3 and 4. A 2X multiplier is then displayed above each reel and if you create a win that has a reel with an activated multiplier, it is applied. If a win is created that includes multiple multipliers, these will be multiplied by each other before being applied to the win.

Once you have activated the free spins feature, a random paying symbol will be selected as a special expanding symbol. When you then spin the reels, this special symbol can create a win even if the symbols aren’t on adjacent reels, where it is only required that the right amount of symbols land. When a win is created with the special symbol, they expand to cover their entire respective reels, and then generate multiple winning combinations.

Rich Wilde is certainly a master at finding new adventurous places, and this time we’re setting out on a quest for the Wandering City. It's a very cold place that this slot is located at, but it gives us a warm welcome, where we get to enjoy yet another slot with an Expanding Symbol mechanic. During the base game you can take part in a great mix of symbols, where the higher pays decent and with the help of the wild symbols many winning combinations can be created. Something that can make the wins even more festive within both the base game and the bonus game, is the multiplier feature. Above the reels 2, 3 and 4 there is a 2X multiplier placed, which can be randomly activated. There can be several of these activated at the same time and if you have created winning combinations that are placed on the same reels as these activated multipliers, you can get a big boost in your winnings.

But it's by landing 3 or more wild scatter symbols, that the real adventure begins. Then you will get a special expanding symbol selected, where this will expand when included in a winning combination, which is a very lucrative feature. This is something we've taken part of numerous times before, including Book of Dead, which despite its introduction back in 2016 is still played extremely heavily. What makes this slot very interesting is the multiplier that can be randomly activated and if you get several of these in combination with the expanding symbols, then you are truly up for a treat. Even though much is similar the previous Book of slots that Play'n GO has created, this slot really gets a fresh touch with a higher potential maximum win of 10000X and more ways to win at 243. In addition, they choose to let go of their beloved Egyptian mythology for a while and this time let us travel to the high mountains of Patagonia. Provided you play with the RTP of 96.20%, it's a stable level, where its high volatility can bring sudden bonanzas. Much is the same feature-wise, but the small but essential tweaks in theme, max win and multiplier make it a decent successor. Like how Rich Wilde loves to constantly take on new challenges and visit new places, people who like slots with expanding symbols would surely like to try this version.

Rich Wilde and the Wandering City is a slot, where we get to enjoy another gaming adventure with expanding symbols. Where, along with this legendary explorer, we can take part in big wins hidden up among the high mountains of Patagonia.