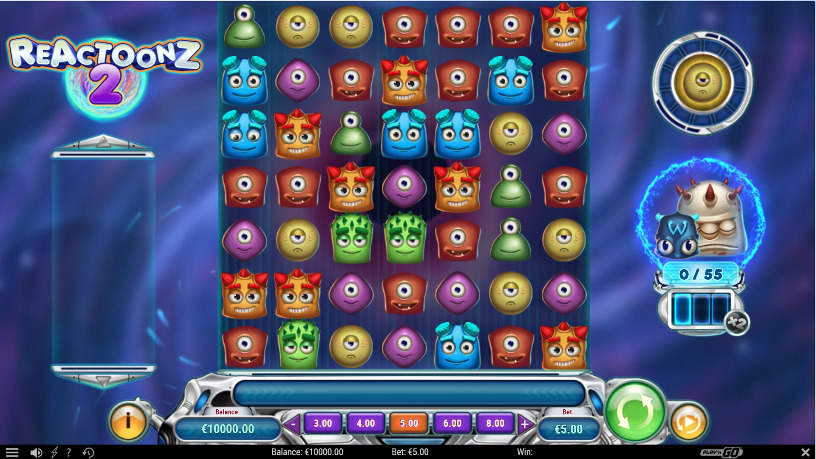 Finally, Play'n Go is back with the sequel to their previous success, namely Reactoonz 2. In this colorful game with cascad gridslot, you are once again guaranteed a really intense adventure. Their first edition Reactoonz was released in 2017 and quickly became a favorite for many of us. Since this slot machine have been constantly hot since then, it was a great surprise to hear about this sequel. So, what's new with this sequel? To begin with and mention, it’s also being played this time on a 7 reels with 7 rows. On this slot machine you have a Min.bet of 0.20 and a Max.bet of 100, where you can succeed in obtaining a maximum win of 5083 X the amount you bet. The game has a high volatility and you play with an RTP of 96.20%. Where the classic symbols are included as well and you play on a cascading slot machine, where symbols that give winnings disappear and make room for new ones that fill these empty spaces.

On a grid as large as this, there are many opportunities to win, and by getting 5 identical Reactoonz in a cluster of different shapes you win. They should be adjecent either vertically or horizontally, but they cannot be diagonally. It is always sensitive as a developer when it comes to sequels, regarding what you can and cannot change. In Reactoonz 2 we get two new wilds, namely Electric Wild and Energoon Wild. This game arrives with a number of different features, where you can get 4 different kinds of wilds. All of these replace any Reactoonz symbol to create more clusters and winnings. There is Electric Wild, Uncharged Wild, Energoon Wild and Gargatoon Wild. But these Wilds also have different characteristics and winning opportunities, where it all depends on how well you manage to fill the two different meters, Fluctometer and Quantumeter.

Electric Wilds can create a heavy rain of Reactoonz

You will see the Fluctometer at the top right of the screen. Where at the beginning of each round it shows a Lil'Goon which is the fluctuating symbol. What does this mean then? Each time you win with the symbols displayed by Fluctometer, it is replenished. Once you have filled it up, it will randomly appear 1, 2 or 3 Electric Wilds on the game's grid.

Things can really happen in this reactor. It becomes a chain reaction, once you start collecting fluctuating symbols and more Electric Wilds are produced. The winning clusters that Electric Wild has been involved in creating will disappear in the usual cascading gridslot spirit. At the same time, the Goon that participated in this win will, with the help of Electric Wilds, zap away from the reels. Different things can happen depending on how many Electric Wilds you have left on the grid and which can create a real rain of symbols. If at least two of these Wilds are next to each other, all symbols except Wilds disappear from the grid. Where the same thing can be repeated once again with these newly arrived symbols. As long as these Wilds are next to each other, it will continue to rain symbols. If Electric Wilds are apart, two of these are randomly connected and a line is drawn between them. Where everything around these two Wilds and on their line is destroyed. Bring an umbrella because these symbols will continue raining until there are less than 2 Electric Wilds left. Something that is good to add is that this does not pay out, but instead charges the Quantum Meter.

Uncharged Wilds, yes these are just like the name not activated yet and they are placed on the slot machine's grid. As long as they are disabled, they do not fulfill any function, but blocks and stand in the way for potential wins. But how do you change this? If a cluster of wins occurs adjacent or if two Electric Wilds become active, then these Uncharged Wilds will be transformed into Electric Wilds as well.

So, we have a Fluctometer that helps us generate Electric Wilds, then we also have a Quantumeter. The later mentioned helps us to summon the long awaited Gargatoon and Energoon Wilds. Each time you get Electric Wilds to zap any Reactoonz of the grid or if they are participating in a winning cluster, Quantumeter will start charging. There are 3 levels you can reach, plus an overcharge. Each Electric Wild symbol that make a win, counts as one charge. You start at 0 and it takes 55 charges to reach Level 1. To get to Level 2 you need another 30 charges and to get to Level 3 you need another 25 charges. To finally get to the mode called overcharge, which quite frankly sounds completely maxed out, you need to get 25 charges more. Now we find out what these different levels mean.

Energoon Wild, as you may know from previous editions of this game, you can get symbols that cover larger parts of the grid. The same applies to this sequel. If you get to Level 1, 4 Energoon Wild 1×1 will be randomly placed on the grid. When you reach Level 2, you get the same thing as in Level 1 plus a Mega 2×2 Wild which is also randomly placed on the grid. If you do not succeed in reaching Level 3, Quantumeter will continue to send out Energoon Wilds, as long as charges exist. During this mode, the meter can be charged, which can be nice to know about if you do not reach Level 3. Since Level 1 costs 55 charges and Level 2 costs 30 charges.

Puh, yes that was some text to get through I know. But the text really reflects how the game is, fast-paced with a lot of things happening all the time. Play'n Go comes here with a sequel that really keeps pace and delivers a great gaming experience. If you have played the previous version, you will love this sequel. If you have not played this before, you will still love this. The mathematical model with which the game is built, is carefully calibrated and well balanced. The game's grid is filled with fantastic colors in the form of Reactoonz symbols and by successfully charging the various meters you can prepare for a real ride. Using the cascading feature, it will rain new symbols. So, get ready and make sure you bring an umbrella. Because it's cloudy with a big change of Reactoonz.

The release date is 1st of October