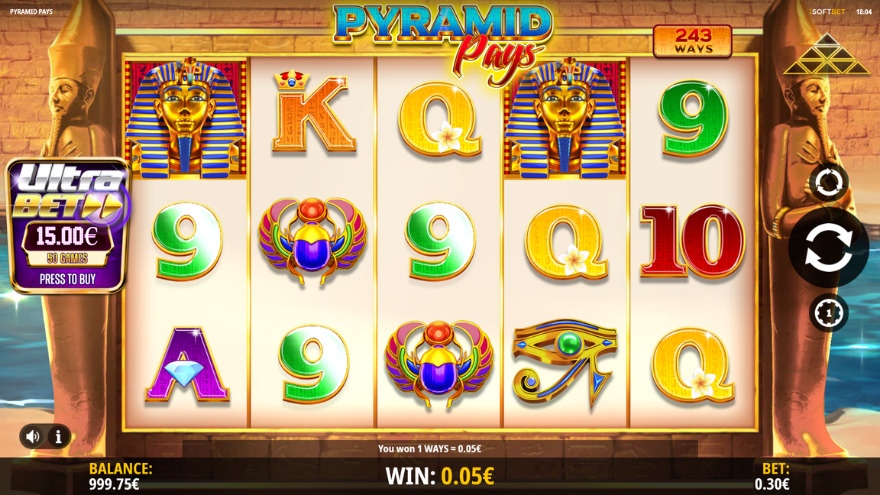 Pyramid Pays is a new casino slot from iSoftBet where we travel back to ancient Egypt and look for hidden treasures. Where this time they turn out to be within the giant pyramids and with help that come in the form of features, we have a chance to find treasures worth up to 3840X the bet. The fact that Egyptian-themed slots are among the most common is hardly a shock, but their content tends to vary considerably. It will therefore once again be very exciting to dive into this desert-filled place that once was green and find out what you can expect to see during the spins.

In this adventure in North Africa, we have a bunch of wonderful features to help us in the hunt for the bigger wins. The features are Wild Symbol, Free Spins, Pyramid Pays and Ultra Bet.

The game's design consists of an Egyptian theme, where behind the reels we can glimpse a pyramid and blue shimmering water. On each side of the reels, we have two golden pharaohs and all symbols that will be able to land are adorned with gold. You can play this slot on mobiles, notepads and desktops. You create a winning combination by landing 3 or more of the same symbol type on adjacent reels starting at the far left.

What is the max win in the slot Pyramid Pays?

What features are in the slot Pyramid Pays?

This symbol can land on the reels 2, 3 or 4, where only one can land at a time. This symbol helps to create more winning combinations by substituting for other symbols. The only symbol it doesn’t substitute for is the scatter symbol. Each win created where a wild is included will be multiplied by 2X.

By landing 3 scatter symbols within the Free Spins feature, the Pyramid Pays feature is activated. You will then be able to take part in one of the prizes displayed within the pyramid. There are 9 different prizes to take part in, that from the beginning shows 2X, 3X, 4X, 5X, 8X, 10X, 15X, 20X and 100X. One of these prize segments will be randomly highlighted and if you land on this, all prizes will be doubled.

You can successfully trigger this feature several times during the Free Spins feature and each time you land on a prize segment, it will be disabled, and you cannot land on it again. You can win a total of up to 9 different prize segments.

During these spins you can land scatter symbols that trigger the Free Spins feature and if you do, these will be saved and used when the Ultra Bet feature is complete.

In this slot from iSoftBet, we get the chance to take part in large treasures that are hidden in the pyramids. The spins that you start doing in the base game give a pretty decent experience, where you can use the wild symbol to create more winning combinations. The great thing about this wild is that every time it is included in a win, the win is doubled, but the downside is that you can only land 1 per round and thus only take part in one multiplier at a time. By landing 3 or more scatter symbols, the Free Spins feature is activated, and you are one step closer to being able to enjoy the riches of the pyramids.

You then get 15 free spins and within this feature it is possible to land 3 scatter symbols again and if you do, the Pyramid Pays feature is activated. Where you then get to take part in one of the 9 different direct prizes that are available and during the bonus round you can succeed in taking part in all of them. What really increases the excitement is that you can manage to double the value of these different direct prizes, which means that you get closer to the potential maximum win of 3840X the bet. Just as we have seen in among others, Legend of the Four Beasts, you can once again take part in the Ultra Bet feature. Where for a payment of 50X you get 50 spins, whereby collecting stars you can get direct prizes of up to 1000X the bet. It is also possible to trigger Free Spins which are activated after the Ultra Bet feature is completed.

The game clearly revolves around succeeding in activating the Pyramid Pays feature, which can give big wins, but it is a feature that usually ends before you have had time to receive several of these prizes. If it hadn’t been for the Ultra Bet featue, the game would certainly have felt empty and it isn’t something that stands out from the large number of Egyptian slots that already are out there. There will be occasional spins that certainly give real thrills, but as a whole it will be difficult for this contribution to fight against all the other slots out there.

Pyramid Pays is a slot that allows us to take part in an Egyptian gaming adventure where the lucky player can take part in the hidden treasures of the pyramids. But where its all-too-common theme and basic features won’t place it on the shelf among the favorites.