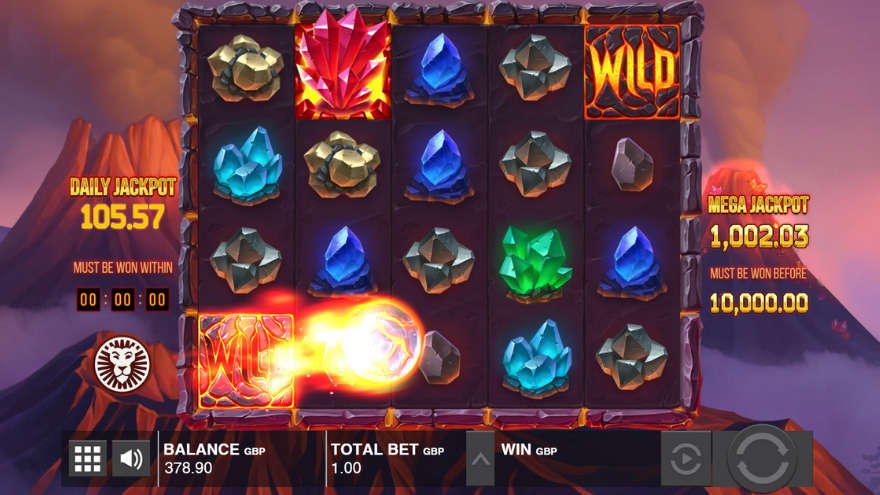 Mount Magmas is a new casino slot from Push Gaming that was released exclusively at LeoVegas on 27/5-2021. Here we go to a very hot place among mountains and volcanoes, where they can erupt any minute and release some big wins. It is a slot where you can win instant prizes of up to an incredible 20000X the bet and there is also a smoking Hot Mega Jackpot that can deliver a win of a phenomenal €100000.

Volcanoes are certainly a scary but at the same time fascinating thing, where their eruptions are due to hot magma wanting to escape up. It has the name magma while it is below the surface but as soon as it erupts on the surface it becomes lava. These volcanoes can be really big, and the fact is that the world's largest volcano, Mauna Kea, has a height of 4207 meters. If this Hawaiian volcano, which is located in the ocean, had been measured from the bottom of the ocean, it would have been higher than Mount Everest, as its total height would then be 10203 meters. Although these volcanoes are fascinating, these Mount Magmas from Push Gaming are much more interesting, as their magma can turn into valuable crystals when they reach the surface. This slot is permeated by a large amount of mystery, where many things can happen during the spins, so let's find out what the slot contains.

To be able to take part in all these glorious max wins, we have a bunch of features to our aid. The features are Wild Symbol, Magma Rock, Volcano Bonus, Daily Jackpot and Mega Jackpot. Just as these volcanoes erupted a lot of big wins, Push Gaming has erupted a lot of high-quality games lately, such as Jammin' Jars 2 and Dinopolis. Let's find out which symbols can land during the spins.

The game's design consists of a mountain and volcano theme, where these can erupt some mighty fine prizes. In the background of the reels, you can, as expected, see the different erupting volcanos. It is a slot that can be played on all device’s mobiles, notepads and desktops. You create a winning combination by landing 3 or more of the same symbol type on adjacent reels starting at the far left.

What is the max win in the slot Mount Magmas?

What features are in the Mount Magmas slot?

The game's Wild Symbol helps to create more winning combinations by substituting it for other symbols, where the only symbol it doesn’t substitute for is the scatter and Magma Rock symbols.

If you land a Magma Rock on the reels during the spins, this symbol will be transported to the nearby volcano. When this symbol ends up there, there is a chance that the Volcano Bonus will be activated. The position that the Magma Rock landed on will leave a Wild Symbol.

When you finally succeed to get the Volcano Bonus activated by a Magma Rock, then 1 of the volcanoes will appear with selectable tiles. You will start from the bottom, where there are a total of 11 rows with selectable tiles. During this fantastic pick feature, there are 3 different symbols that can be displayed. Where there are direct prizes and symbols that can take you to the next row to once again let you choose from different tiles. The third symbol that can land is the one that ends this feature. The higher up you climb, the greater the direct profits you can scoop up. Where these direct prizes can have values between 1X to 20000X the bet size.

At the Mount Magmas slot, there are two different types of Jackpot, one of which is the Daily Jackpot, where it is guaranteed to give this win to a lucky player every day. This Jackpot always starts at €1000, where you will be able to see a timer that counts down the time and also what the current Jackpot size is.

This Jackpot is significantly larger, where it always starts at €50,000 and to the right of the reels you can see what its current value is. The closer it gets to the maximum value, the greater the chance that it will be activated. With each spin made, a small portion of your bet will be distributed to both the Daily and Mega Jackpot.

In this slot among giant volcanoes, it can certainly erupt some big wins. The Base game offers entertaining and often nerve-wracking spins where Magma Rocks can land. Each time these lands, they will be thrown into a volcano, leaving a Wild symbol at its previous position. What then happens is that this Magma Rock can randomly activate the Volcano Bonus. If you succeed in activating this feature, you will get to take part in a pick and click feature, where you can click your way through 11 levels. Each level has direct prizes, and arrow symbols that moves you up or a symbol that ends the feature. It can be very festive clicks as the direct prices can have values between 1X up to an incredible 20000X the bet, which certainly makes those clicks very exciting.

There are two different Jackpots, Daily and Mega where these have a starting value of €1000 and €50,000 respectively, where you through your bets contribute to increase these Jackpots slightly. The game's Mega Jackpot can go up to an incredible €100,000 and will be a perfect complement to the game's other features. Push Gaming, which is usually known for its high volatility among its slots, this time has a medium volatility, where an RTP of 96.50%, which is above average, has been chosen.

Even though the game's Volcano Bonus provides wonderful playing moments, the game revolves around the Jackpots and you are constantly reminded of this as their various current values are constantly updated and counted down. Players who are fans of the Jackpots slot will find a perfect balance between high potential Jackpots and entertaining Bonus games, which can be really teasing from time to time. But it's not a slot that holds the same standard as their previous master slots like Jammin' Jars 2 or Razor Shark, which are truly great shoes to fill.

Mount Magmas is an online slot from Push Gaming where the volcanoes can erupt and give some big wins from both its Vulcano Bonus and Jackpots.