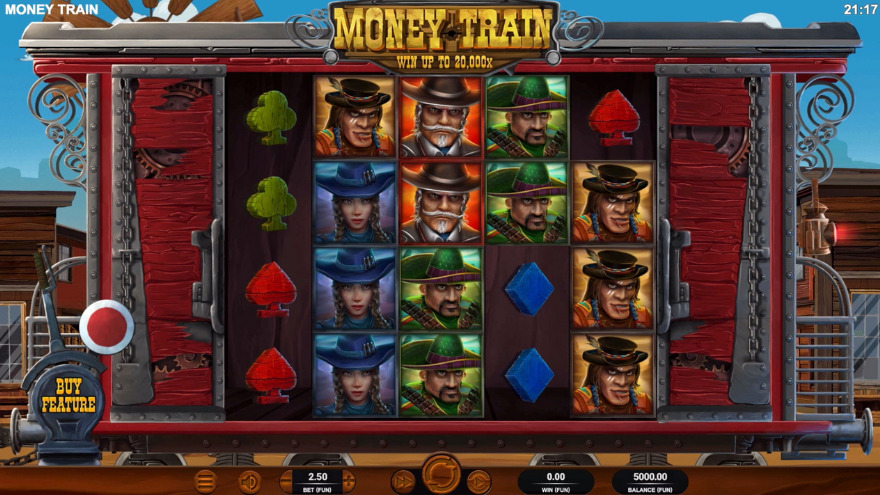 With the Money Train slot running on the Relax Gaming software, players get to travel to their final winning destination within just several spins of the reels. This Wild West-inspired game boasts 5 reels and 40 paylines with a couple of bonuses included such as its Money Cart feature, and its super-stacked symbols for more rewarding winnings.

The game’s RTP ranges from 96.2% up to 98% when using the game’s Feature Buy option. It also features high volatile spinning actions with a great betting range starting at only 0.20 credits and going up to 25 credits per spin that players can invest. Furthermore, the Money Train slot also features a great winning potential with maximum winnings offered going up to 20,000x players’ stake.

Let the Money Train Take You to Super Winnings

Looks-wise, the Money Train slot appears as a classic Wild West-themed game with a traditional Western soundtrack and traditional Western-inspired symbols. The game takes place on a massive train’s carriage while the reels are packed with hearts, clubs, spades, and diamonds. Besides these symbols, the Money Train slot also includes four outlaws of the Wild Western crew. There is the TNT expert, gunslinger, debt collection and their boss or leader.

The game’s backdrop depicts interesting animations including a massive windmill located on the left side of the reels. Everything is set within a remote desert with clear blue skies and a couple of bones depicted in the distance. During their Money Train gaming sessions, players should pay attention to the most rewarding latter symbol that rewards winnings up to 20x players’ stake for a five of a kind winning combo landed on a payline.

Besides its standard-paying symbols, the Money Train slot also features a couple of special bonus symbols including its wild represented by the shotguns symbols that replaces other symbols to help players pocket more winnings. These symbols land in stacked formations on the reels which is also the case with the game’s standard symbols. Besides wilds, there are also bonus triggering special scattered symbols that can land only on reels one, three and five.

The Money Cart Bonus with a Variety of Bonus Extras

The main attraction here is definitely the game’s Money Cart Bonus feature which activates when scattered bonus symbols land on reels one, three and five on the same spin. Once this mode is activated, the game introduced another train carriage setting with a completely new reel configuration and with twenty different symbol positions. This bonus always initiates with 3 free spins while the spin count starts all over again every time a new symbol hits one of those special symbol positions.

This bonus mode stays active for as long as new symbols land on the reels during those 3 free spins. Furthermore, each special symbol which appears in this bonus mode has its own functionality. The Money Safe symbols always reveal xbet values which is also the case with other special symbols that come into the game. Some of them reveal xbet values and assign them to other visible symbols on the reels for the current and for any spin which follows. All in all, with rewarding winning values added here, players can pocket wins up to 20,000x their stake.

The Money Train slot is a highly unique, very much captivating game which may sound a bit complicated, but everything falls into place within several spins of the reels. While the base game delivers winning up to 800x their stake, more can be won during its bonus mode which definitely does not fail to impress in any way.