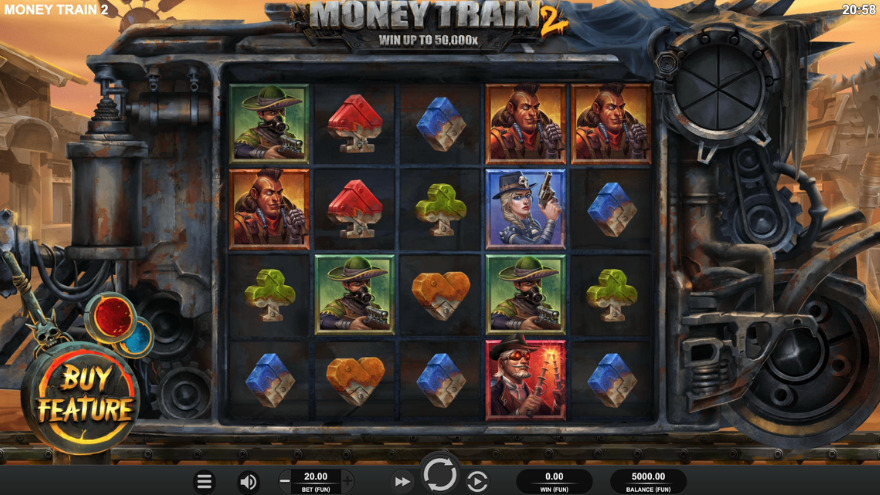 A train adventure you don’t want to miss

Here it arrives in a slightly high speed to the station, the train you've been waiting for. Be prepared and jump on board, because this is a train ride you do not want to miss out on. The game developer behind this game, Relax Gaming has made sure that this train ride will be even more maxed out than the previous one.

This slot machine has a very high volatility, where there is a Min.bet of 0.10 and a Max.bet of 20. Where you play on a 5-reel and 4-row slot, with paylines of a total of 40. So far, so good. But hold your hat, because this sequel comes with an RTP of 96.4%, which can be increased to 98% through bonus buy. It also has a remarkably high maximum win of as much as 50'000X the amount you have placed in a bet.

Relax Gaming has reviewed its predecessor and listened to the players opinions. With this in mind, one notices that this sequel has the developed features required to create a hype around their casino slot again. With higher chances of winning and a polished appearance in the game, they make the usually calm train ride intense and extra exciting instead.

With a theme that is both retro and futuristic

This casino slot takes you to a rather remarkable era. Where the predecessor Money Train took place entirely in the Wild West, it has now instead ended up in a position between past and future. It gives the feeling of a steam powered world, where developed mechanisms in combination with the cowboy world, creates a retro futuristic theme. Make sure you have your headphones or speakers turned on, so you can be transported into this world. The music has a good and significant mood setting role and even if it is reasonably calm during the usual spins, you will definitely get extra engaged when its Money Cart Bonus Round kicks in, then the real sound experience comes. The casino game is permeated by a dystopian feeling, a bit like Mad Max where nomads live wild and takes all of the things they can get their hands on. But instead of car rides, we now have a packed train ride. Where the contents of the train can result in wealth for the lucky one who manages to put his hands on its treasure. But a high prize does not come easily, it requires patience and the patient soul will be rewarded.

As previously mentioned, this casino game has a high volatility. As a result, there can be many spins without wins, but with Money Train 2's upgraded version you remain focused, as it's a cool environment you play in keeps you amused. But yeah, wins are what you are ultimately looking for, so the persistent player can finally get the chance to take part in the game's big draw, namely the Money Cart Bonus Round. This is where the adventure really begins..

To activate this bonus you need to get 3 or more scatters. Once inside the bonus zone, you will be assisted by some of the most experienced bandits. These are the Collector, the Payer and the Sniper. What a gang! Just from the names to indicate one understands that they will boil together something good. So, what can these bandits do?

Scatters that have a value will be added to the payout, Payer will add their own value to this pot. The Sniper doubles the value of up to 8 Scatters, while the Collector sums up all the values and hand over his own. It can be a real party in other words. You want to be within this bonus as long as possible and persistent characters will increase the steam and un-persistent characters make the steam run out by a single activation. But is it already over then? No, the Necromancer could appear and in those lucky times, he brings them all back to life. For every symbol you manage to land, you increase your chance of winning more. Strive to get a reel completely full with symbols, then another column will be added.

The casino slot who gives you an incredible ride

Money Train 2 arrives in a tuned train. With polished features, it follows the same theme and bonus principle as in the previous version, but with a remarkable increase in chances of winning big. 50´000 X your bet, can be a crazy pot. The bonus game has a slightly different structure than other games. In this one, you collect multipliers via free spins, this gives a fat winning pot at the end instead of getting many small wins all the time. You are eagerly waiting for the bonus game to appear.