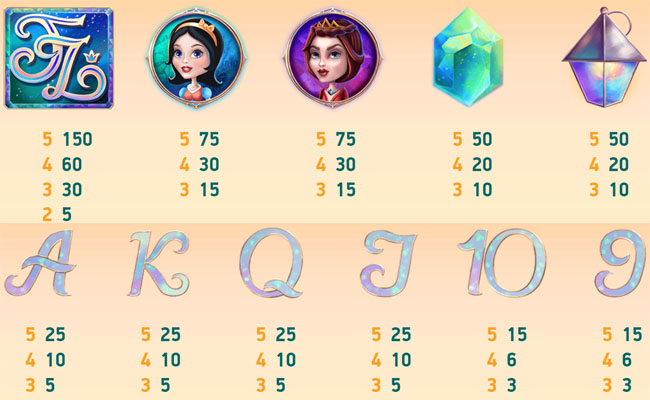 Mirror Mirror is yet another exciting, visually appealing NetEnt creation. The game, in fact, is the third installment in the NetEnt Fairytale series packed with awesome winning opportunities and some magical winnings boasting exciting Fairy Mirror bonus features, Fairy Magic Spins and awesome payouts up to 1.822x payout potential you get to grab on a single spin. The game comes packed with 5 reels and 243 paylines which are all nicely yet in this NetEnt Wonderland you get to pay a visit to today.

Live Your Own Fairy Tale

As you press the spin button on the Mirror Mirror game, you travel to a magnificent NetEnt Wonderland packed with top-notch graphics, stunning visuals and remarkable animations which provide a truly immersive both desktop and mobile gaming experience without a single dull moment. Besides being packed with a bunch of rewarding bonus features, the game is also one of those nicely crafted slots packed with neatly crafted fairy symbols such as Princesses, Evil Queens, colorful gems and other which are definitely loyal to the theme of the game.

The game’s reels are transparent set against some Wonderland with stunning trees, mountains, lush green grass, and flowers also depicted in the distance. This fairy tales-inspired journey is also accompanied by friendly, yet mystical backing tunes which add a veil of mystery to the game. As already mentioned, during your Mirror Mirror gameplay, you get to take advantage of the game’s three bonus features which include plenty of Re-Spins, symbol transformations, plenty of Free Spins and other lucrative extras.

One of the most important Mirror Mirror symbols is the Mirror symbol which can land on reel three. Once you land it on reel three, you trigger the game’s Mirror Re-Spin feature which will display either the Queen or Princess symbol. All instances of your chosen symbols will then lock in their place during your Re-Spins. The game is also packed with three bonus features including the Fairy Magic Spin, Fairy Surprise and Fairy Mirror.

The game’s main bonus games are divided into three different modes which can be triggered by landing three of those bonus symbols on reels one, three and five on the same spin or it can be activated randomly when those Bonus symbols land on reels one and three on your non-winning spin. Once you activate this bonus, you are awarded one of three games which include the Mining Bonus, Coin Win or Free Spins.

If you get the Mining Bonus, you have to mine one of nine crystals in order to reveal your cash prize. If you get the Coin Win bonus, you are awarded a great prize of 15x your stake while triggering the game’s Free Spins bonus mode brings your 10 Free Spins with the game’s Mirror Re-Spin bonus mode easily activated of only one Mirror symbol appears on the reels during your Free Spins.

With the very first spin on the Mirror Mirror slot, you get to travel to this amazing, magical winnings-packed land of magic where every of your most lucrative dreams can come true within just several spins of the reels especially if you trigger those generously paying Mirror Mirror bonus features. If you are a fan of fairy tales-inspired games, this NetEnt creation is definitely worth your attention.