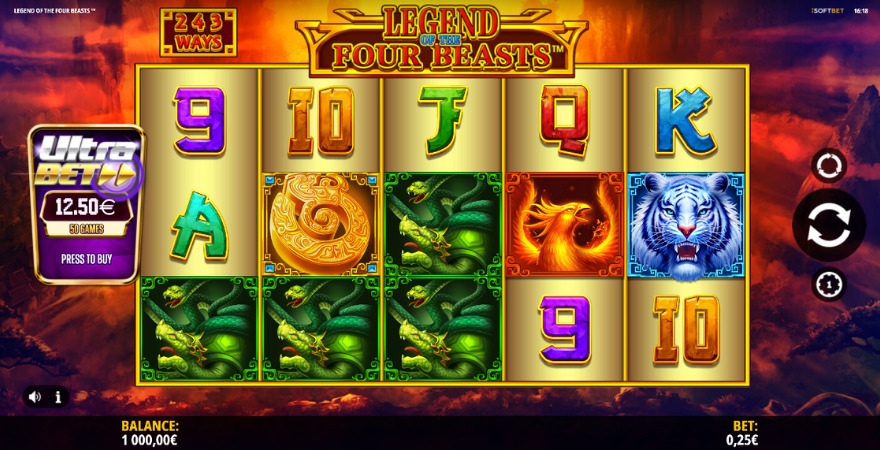 Legend of the Four Beasts is a new casino slot from iSoftBet where we head to ancient Asia. To a place where we get to take part in their mythology surrounded by 4 giant and powerful dragons, where we spin on the reels of fortune in the hope of being able to take part in its great prizes. The mythological dragon has been talked about for a long time, where there are a large number of varying stories about how these creatures originated. Where some say that carp that have swum upstream for a long time were eventually rewarded with an upgrade in the form of a dragon. While others say that the dragon's emergence is a result of people back in time finding large dinosaur skeletons and thus drawing the big conclusion that it must have been fire-breathing creatures. Something that most people agree on is that these dragons must have been very skilled at collecting gold and thus have great riches in their dungeon. So, let's dive into this slot and find out if it's true this time too.

In this magnificent adventure among dragons, we have a bunch of wonderful features to help us. The features are Wild Symbols, Free Spins and Ultra Bet.

The game's design consists of a dragon theme where we get to take part in these spectacular creatures from the Asian mythology. In the background of the reels, you can see the red shining dungeon that we are in together with the dragons. You can play this slot on notepads, mobiles and desktops. You create a winning combination by landing 3 or more of the same symbol type on adjacent reels starting at the far left.

What is the max win in the slot Legend of the Four Beasts?

What features are there in the slot Legend of the Four Beasts?

The features are Wild Symbols, Free Spins and Ultra Bet.

Wild symbols help to create more winning combinations by substituting for other symbols, where the only symbols they don’t substitute for are the scatter symbols. There are two different wilds that can land normal (blue) and golden (gold). The normal wild can only land on reels 3, 4 and 5 and when it lands it will expand 1 symbol both horizontally and vertically.

The golden wild can only land during the free spins feature and then it can land on reels 3, 4 and 5. When this land, it will expand 1 symbol both horizontally and vertically, in addition the win multiplier will increase by 1. This newly added multiplier will be used the same spin as it was obtained along with the previously collected multipliers.

If you land 3 or more scatter symbols, the Free Spins feature is activated. Depending on whether you landed 3, 4 or 5 scatter symbols will result in you receiving 10, 15 and 20 free spins respectively. During this feature you can retrigger extra free spins, where you get the same number of free spins per scatters as when activating the feature.

As mentioned, the golden wild will be able to land during this bonus feature, where it helps to create more winning combinations and also increase the win multiplier by 1 each time it lands. The multiplier stays during the remaining spins that are made.

If you succeed in landing 3 or more scatters during the spins, the Free Spins feature will be activated after you have made your 50 spins. You can collect several rounds of free spins during this Ultra Bet session.

This slot lets us dive into an adventure where you get the chance to partake in the dragons' riches. The base game provides entertaining spins, where the wild symbol certainly has a wonderful feature regarding its expanding effect. By increasing in size both horizontally and vertically, many winning combinations can be created. But it is within the Free Spins feature that the truly magical moments take place, this is because the wilds turn golden. Where they have similar expanding effects as in the base game, but the big difference is that it also helps to increase the win multiplier. Since this wild multiplier increases by 1 each time a golden wild land and it also stays during the remaining spins, it can get really high at the end of the feature.

You can get up to 20 free spins when activating the feature and you can also retrigger more during the spins. Where many spins are a good combination with the golden wilds. If you want to try something new and spice up your presence, you can use the game Ultra Bet, whereby paying 50X the bet you get 50 spins. During these spins you can collect stars that can give up to 1000X in direct price and in addition you can take part in the other features as in the normal mode. They have added a decent max win size of 4240X which can be obtained within the free spins. The white tiger and dragon symbol pay very high and these can quickly generate gigantic winnings if you land them together with a win multiplier. It is a slot that offers simpler features, but where the few selected features have very entertaining outcome that make the moment at the slot very enjoyable. Dragons and Asia themed slots are certainly something that has been used extensively over the years, but by adding these special wilds and also a quick spin Ultra Bet feature, this type of slot is given new life.

Legend of the Four Beasts is a slot from iSoftBet which with its Ultra Bet feature is permeated by a constant tension, where stars together with scatter symbols are the key to wealth.