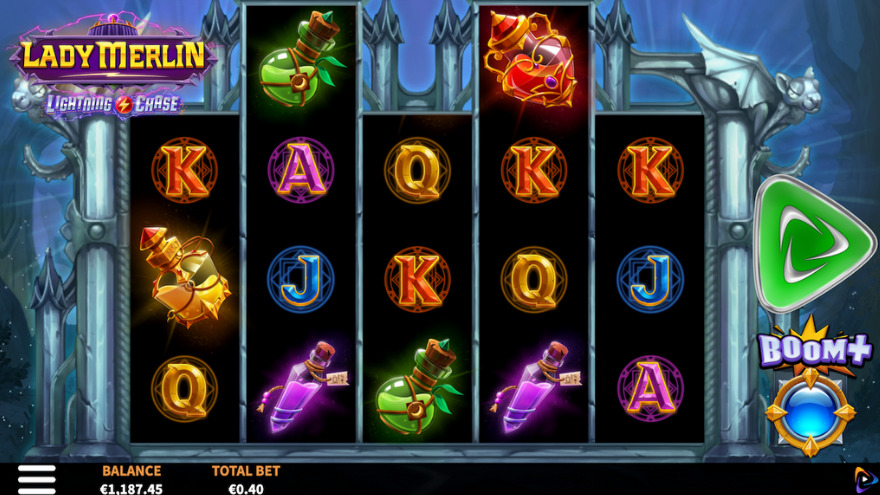 In this new slot from Boomerang Studios, we head to a very mysterious and secluded place. It is a place where Lady Merlin practices and create magical formulas, where electricity is created from air and even large prizes can be generated from this. It is a very exciting slot that has been created where you can take part in many different features through adventurous spins and also their Boom+ Ante Bet which can change the game's conditions significantly.

Lady Merlin turns out to have come a long way with her research in controlling electricity, which turns out to have abundant effects. During the spins, the experimentation continues and lightnings coils are collected, which can generate great wins.

During these electrifying spins, you can take part in many different features. The features are Wild Symbol, Boom+ Ante Bet, Hold and Respin, Collect and Free Spins.

The game's design consists of a magical theme where we are in a very remote place where Lady Merlin practices magical formulas. The game's reels have a row setup of 3x4x3x4x3 where they are surrounded by a very beautiful silvery frame and in the background a mysterious, a bit Harry Potter-like music is played. You create a winning combination by landing 3 or more of the same symbol type starting on the leftmost reel. The only symbol that doesn’ have to start on the reel on the far left to create a winning combination is the scatter symbols.

The lower paying symbols consist of J, Q, K and A. Where 5 of the same symbol type pay between 1.2X to 2.4X the bet. Where the higher paying symbols consist of magic potions in the colors purple, blue, green, yellow and red. Where 5 of the same symbol type pays between 3.6X to 10X the bet. The game's Wild symbol consists of Lady Merlin herself and the scatter symbol consists of a blue orb. You will also be able to land lightning coils and collect symbols during the spins. Which can create really festive wins. Let's find out what the features do.

How much can you win in the Lady Merlin Lightning Chase slot?

What features are there in the Lady Merlin Lightning Chase slot?

This symbol helps to create more winning combinations by substituting for all other symbols except the Collect symbol. If you have Boom+ Ante Bet activated, it will also substitute for the Collect symbol. The Wild Symbol can only land on reels 2 and 4, where each Wild you land within the Base game will result in that the prize doubles.

You can activate this feature at any time by clicking on the blue orb at the bottom right. Then you pay 60% extra of your normal bet and get to take part in additional wager. Where the RTP and volatility increase, but also the potential maximum win which then becomes 25600X. By activating this feature, as mentioned, the Wild Symbols will substitute for all other symbols and also enables activation of the Free Spins feature.

If you land the Collect symbol together with Lightning coils, these will be picked up immediately and when activating the Hold and Respin feature, no Lightning coils will be retained.

If you land 3 or more scatter symbols, the Free Spins feature is activated. You are then welcomed with 10 free spins and depending on whether you landed 3, 4 or 5 scatter symbols, you get a direct prize of 1X, 5X and 10X respectively. When you land a Wild or scatter within this feature, the starting wild multiplier of 2X will increase by 1. If you land a scatter with a Wild or a Wild alone, it will give 1 extra spin.

The game developer Boomerang Studios has certainly experimented a lot to be able to generate a creation like this. From previously following the flock and creating an Infinity Reels slot, as in Gargoyle Infinity Reels, this time they have tested a completely new formula that has resulted in a very exciting outcome. Even before the first spin is made, the player must decide whether the Boom+ Ante Bet should be activated or not. By activating it and paying 60% extra, a lot of extra features are opened up. The game's RTP and volatility increase slightly, but the biggest increase is clearly the maximum payout that goes from 3808X up to 25600X with the help of this activation. Other features such as that the Wild symbol substitutes for all other symbols and that the Free Spins feature can be activated are other features that this Ante Bet has. But whether you use this Boom+ or not, the game has a great layout in both the Base game and the Bonus game, where you get to take part in a very colorful and wonderful graphics with impressive effects. The game's main character, the Lady Merlin, is somewhat reminiscent of the adventurer in Thunderkick's trilogy Crystal Quest. These effects that continuously appear create an extra depth and feeling during the spins.

The Lightning coils that Lady Merlin tries to control are constantly recurring on the reels and by landing 6 or more of these the Hold and Respin feature is activated. Where you can take part in spins that can give many Lightning coils with values between 1X to 100X. This game provider may belong to one of the newer ones on the market, but they certainly show within this slot that they are not someone to underestimate, as they turn out to have an enormous knowledge in design, mathematical models and creativity for features. Even if there is a difference in the size of the bets using the Boom+, there is still a fairly small variation in its size. Where the current sizes of the bet could have offered lower bets and also significantly higher bets, something that would probably have been appreciated among both the low-bid and high-bid players.

Lady Merlin Lightning Chase is a slot that provides nice spins, where its entertaining theme combined with exciting features can provide really big wins for the lucky player.