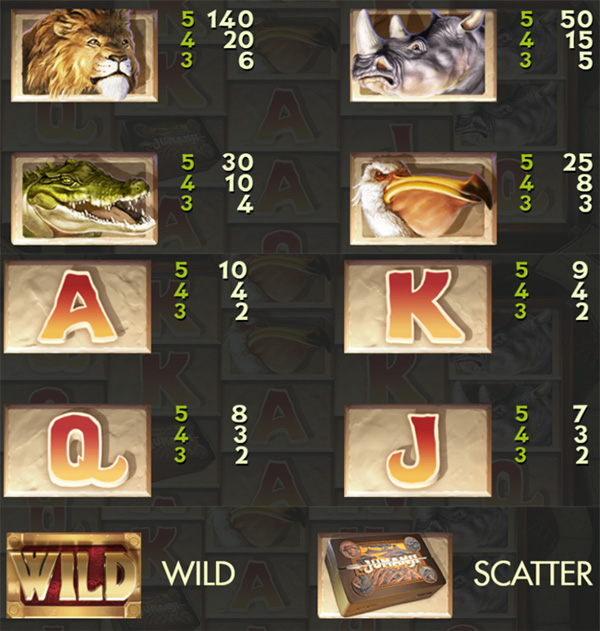 Inspired by one of the most iconic movies of all times, Jumanji, released back in 1995 starring

released its take on the franchise,

the Jumanji video slot, taking you on an extraordinary jungle adventure packed

with 5 reels and 36 paylines, boasting awesome winning opportunities and truly

inspiration from the movie, the game comes packed with various animal-themed

Dive into the Wonderful Animal Kingdom

from one of the most prominent names in the industry, NetEnt did everything

top-notch graphics which, when combined with the game’s rewarding bonus

features, definitely make this game worth a try.

As you turn on

your explorer mode and use your survival kit for escaping those raging animals,

life during the gameplay. You need to escape ruthless rhinos, crocodiles,

lions, and other species of this jungle animal kingdom. As you do so, you will

definitely be stunned by the game’s design, boasting an interesting board game

backdrop laid on the floor.

There is also a

friendly monkey set on the left side of the reels, which sometimes moves to

welcome your winning combinations. Since this is a jungle-themed game, during

the gameplay, you also get to enjoy loud animal roaring and other similar

sounds, which definitely add to the overall mood you get during the gameplay as

When it comes to

the Jumanji bonus features, you get to take advantage of the game’s four

also a Board Game included which is definitely the main attraction of the game.

trigger the Jumanji Board Game mode, you need to land at least three of the

Scattered Board Game symbols in any position on the reels during the base game.

Once you get there, you have to roll two six-sided dice to move along the

board. Depending on your number of landed Scatter symbols, you may get six,

seven, or eight dice rolls which can lead to triggering one of four rewarding

roll, you have an opportunity to trigger some of these features if your totem

Jumanji bonus features. When it comes to features you can trigger during the

Free Spins mode, you get ten Free Spins alongside Re-Spins if you land winning

combinations. Moreover, during this mode, those vines will lock Wild symbols

and keep them stuck to their positions during the Jumanji Free Spins mode. The

symbols landing on the reels. During this mode, you also get to enjoy one or

two Wild Reels on every Jumanji Free Spin. When it comes to the game’s Monkey

Free Spins, you receive six Free Spins in which random symbols are chosen to

shuffle getting you a guaranteed win on every Free Spin. There is also the

that gets you 5 Free Spins adding between four

and nine Wild symbols on every Free Spin.

randomly during the base game. Those include the game’s Sticky Vines feature

reels which can definitely lead to more winnings. Another highly rewarding,

Monkey Mayhem feature, all symbols on the reels shuffle randomly bringing a

guaranteed win your way. There is also the game’s Wild Stampede mode in which

symbols to the reels.

the base game or by landing three or more of the Scatter symbols, you can

easily take advantage of the game’s bonus features on every single spin. This

also comes packed with superb graphics and appealing visuals, which, when

combined with winning opportunities offered by the Jumanji slot, make this

jungle adventure definitely worth your time.