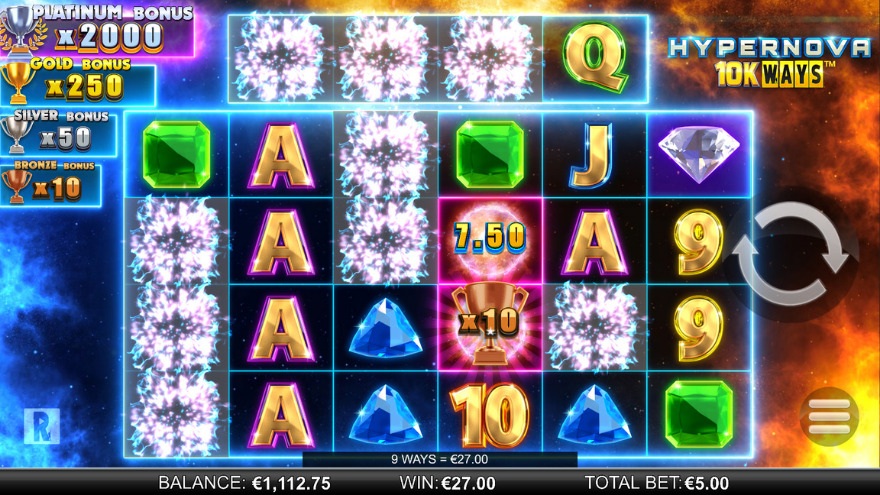 Hypernova 10K Ways is a new casino slot from ReelPlay where we once again get to see their Hypernova concept. We have previously taken part in this intergalactic adventure within their slots Hypernova Megaways and Hypernova Radial Reels. There are indeed many slots with the same concept, where the big difference lies in the mechanic used, where within this slot we can take part 10,000 ways to win. It is now time for us to dive into this slot and find out what it has to offer.

Hypernova 10K Ways is a video slot from ReelPlay that has 6 reels and 4 rows. These reels in combination with an upper horizontal reel and the 10K ways mechanic, can give up to 10000 ways to win. You can choose between making a Min.bet of 0.20 and a Max.bet of 40. The game's RTP is slightly above average, where we have an RTP of 96.20%. You are expected to hit a win at every fourth spin on average, as it has a hit frequency of 25.71% and it is a medium/high volatility where you can win up to 5660X the bet.

In this gaming adventure up among the stars, we have a bunch of wonderful features to help us in the hunt for the big wins. The features are Cascade, Wild Symbol and Bonus Respins.

The game's design consists of a space theme, where in the background of the reels you can see a galaxy that shows strong blue and red colors. On the left you can see the four different bonuses that can be obtained, which give 10X, 50X, 250X and 2000X. The top reel will add one symbol each to the reels 2, 3, 4 and 5. You can play Hypernova 10K Ways on all desktops, notepads and mobiles. You create a winning combination by landing 3 or more of the same symbol type on adjacent reels starting at the far left. The highest paying white diamond creates a profit already when two symbols have landed and it then gives 2X.

What is the max win in the slot Hypernova 10K Ways?

What are the features of the Hypernova 10K Ways slot?

The features are Cascade, Wild Symbol and Bonus Respins.

The game's wild symbol helps to create more winning combinations by substituting for other symbols on the reels. It can only land on the top reel and the only symbol it doesn’t substitute for is the scatter symbol.

When you spin the reels and land 6 or more scatter symbols, the Bonus Respins feature is activated. Then all scatter symbols that were involved in the activation will remain on the reels, where they will receive either a prize or a bonus. You will then receive 3 respins and each time a new scatter lands on the reels, the number of respins is reset to 3 again. It can only land scatters or empty positions, where prizes range from 1X to 100X based on your bet size. The various bonuses that can land are and provide the following:

The Bronze and Silver bonuses can land multiple times during the same feature, while the Gold and Platinum bonuses only can land once each. This bonus feature continues as long as you have respins or have filled all the reels with scatter symbols.

This is truly a slot whose name hypes up the potential within it. ReelPlay uses the same space theme that they have used in previous versions within this concept. It is a solid reel setup that you play on, where with the help of 6 reels, 4 rows, top reel and a 10K Ways mechanic you get up to 10000 ways to win. Although this is a large number of ways to win, we have had the chance to take part in much more within their Hypernova Megaways which could give up to 117649 ways to win. The base game offers a bunch of decent spins, where the wild symbol helps to create more winning combinations and the cascade feature sometimes gives many subsequent wins during the same spin.

The game's highest paying diamond symbol can create festive winnings very quickly, as it has a very generous pay table. It pays already at 2 and if you land 6 of it, it gives 100X the bet. But even though this can give big wins, it is within the Bonus Respins that the really big wins can be scooped up. You can then take part in a classic respin feature, where symbols with values of 1X to 100X can land, where you can also manage to land 4 different bonuses with values of 10X, 50X, 250X and 2000X the bet. It is not as complex as the respin feature we have previously experienced in Money Train 2, since this only focuses on scatters that directly give high prizes, somewhat reminiscent of what we recently experienced in Wolf Reels Rapid Link. Space themes are all captivating, and the background is clearly adorable, but it clearly feels very generic with this version. The design is exactly the same, where ReelPlay plays around between different ways to win mechanics. It gets a little plain and the fact that they have also chosen to lower the potential maximum win does not make things better.

Hypernova 10K Ways is a slot where you can take part in a space adventure at the same place as before, with very few changes.