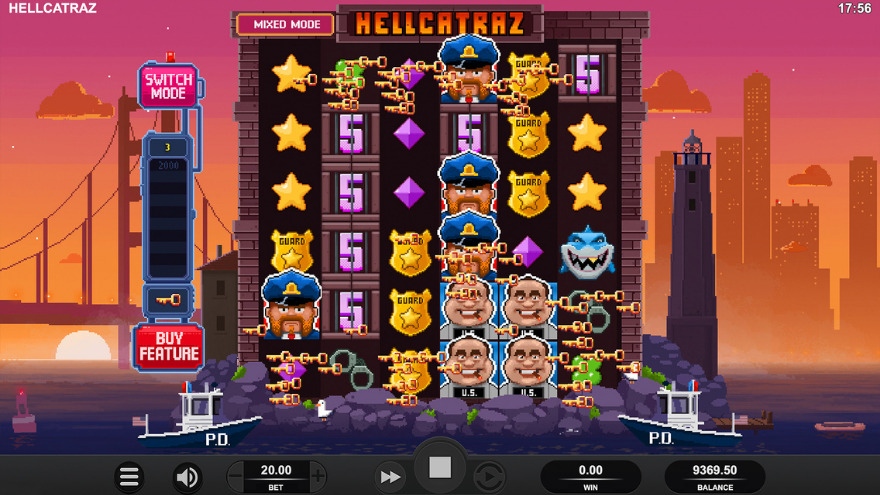 Packed with stunning visuals while offering genuinely thrilling real money casino in Canada gaming sessions, the Hellcatraz slot running on the Relax Gaming software is an awesome release. With this rather innovative release, players travel back in time when those arcade video gaming machines used to rule the gaming industry. The Hellcatraz slot is not short on bonus features as it comes packed with its Mystery Reveal mode, Super Free Spins as well as Bonus Buy and Key Collector bonuses which deliver impressive maximum winnings that go up to 51,840x players’ stake.

The game is packed with 6 reels and 6 rows that feature 46,656 paylines. During these highly-volatile spinning actions, players pay a visit to a world-famous Alcatraz prison which here is crafted to look like an eight-bit game. Thanks to its innovative looks, the Hellcatraz features super retro vibes, and players who enjoy such games will surely remember Flame Busters by Thuderkick which takes the same retro, pixelated approach.

Open Wide the Gates of Hellcatraz

Alcatraz Island which serves as home to federal prison of the same name is located in San Francisco which is clearly depicted in the Hellcatraz slot as there is a massive suspension bridge located in the distance. As previously mentioned, the game comes with a cute pixelated look that reminds of popular games that teens used to play on their video gaming consoles back in the 80s and 90s.

The game’s backdrop is also packed with the skyline of San Francisco which forms its main gaming area packed with 6 reels and 6 columns. The main characters featured in the game include the mobster and the prison guard which appear across the gaming grid alongside other symbols which include standard card suits, handcuffs, badges, and sharks. The game is also packed with wild and scatter symbols as its mystery symbols which will be explained further.

In addition to the Golden Gate Bridge located in the distance, the main gaming area is packed with rocks just like the prison which inspired the game. When it comes to the game’s regular symbols, they bring winnings worth between 0.6x and 2x players’ stake. This leads us to the game’s two modes that players will choose from including its Mixed Mode and its Lockdown mode. The first one is a softer option with high volatility while the Lockdown Mode features very high volatility. The Hellcatraz slot also allows players to choose their preferred RTP from 96.46% to 96.30% depending on the gaming mode.

As expected, the Hellcatraz slot is packed with a cascading feature thanks to which winning symbols get removed from the reels to leave place for new symbols and potentially multiple winnings scored on a single spin. This leads us to the Hellcatraz slot’s bonus features and there are several of them to keep the gaming actions busy at all times. First of all, there are the game’s special Mystery Symbols that appear in the base game.

These come packed with counters that are reduced by one with every cascade. Once these counters reach zero, the affected Mystery Symbols transform to become the same symbol. In Mixed Mode, these symbols come with two independent values while in the Lockdown Mode, all symbols come with the same number. Next in line is the Hellcatraz slot’s Key Collector mode which relates to the game’s key symbols that regularly land on top of the game’s standard symbols.

Moreover, each of these small key symbols award between one and ten special keys which are stored in the Hellcatraz Key Collector meter. Once players have collected two thousand keys, the game’s Super Free Spins bonus mode triggers.

Players who cannot wait to trigger the Super Free Spins bonus can trigger the mode with the game’s Buy Feature for the cost of 200x their stake. All in all, the Hellcatraz slot will appeal to fans of games packed with bonuses, rich gaming sessions, and innovative designs. The game has it all, from staggering winnings to unique gaming mechanics and awesome retro visuals.