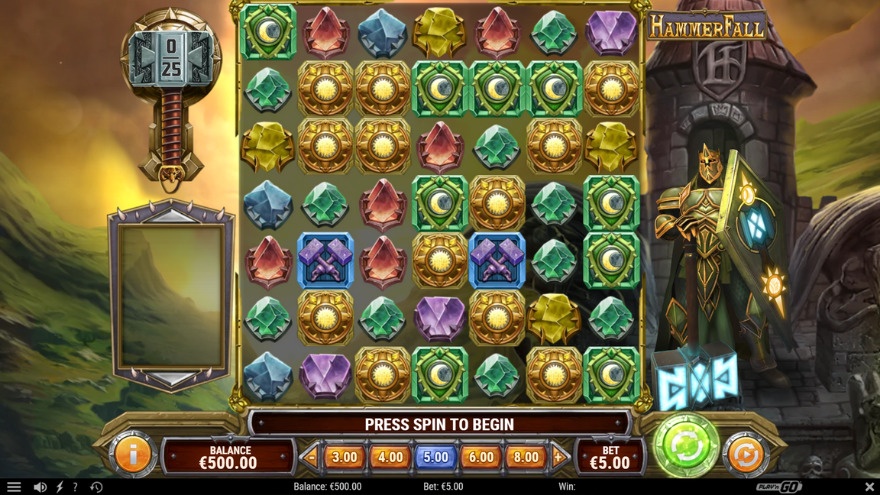 In this new online slot from Play’n GO we get to take part in a fabulous adventure. Where we get to accompany the paladin Hector on a journey that can rewards us abundantly. Hector is a mascot who has accompanied the band Hammerfall during their long career. This power metal band originates from Sweden and was created back in 1993. With their phenomenal singing ability and spectacular feeling to create captivating tones, they have captured the hearts of many over the years. Or as they would rather say it, make the hearts on fire.

During the spins you will get to take part in a large variety of songs from Hammerfall, where its intensity and rocking tones make you end up in a really good mood. Where the different features that are activated have different songs to play. The paladin Hector really belongs to the category of the cooler mascots that anyone has, and it therefore feels very honorable that we get to accompany him on a music-filled spinning experience within this casino slot.

Hammerfall is a new video slot from Play’n GO that has 7 reels and 7 rows. You create a winning cluster by landing 5 or more of the same symbol type in a cluster. You can choose between making a Min.bet of 0.20 and a Max.bet of 100. Like most games from Play'n GO, the RTP can vary with different game providers, so be sure to check out what applies before you start play. It is an RTP of 96.20% by default and a high volatility. The lucky player can scoop up a win of 30000X the bet.

One thing that is certain is that you get to take part in a lot of different songs during the spins and also a lot of different features. The features that you can activate are Cascade, Lightning Wilds, Destruction, Song and Hammer High. Both the Destruction and Song feature have several small features that you can take part in, which we go in depth with within the features section a little further down. Let us first find out what symbols one can expect to see.

The game's design takes place in a fantasy world where we, together with the paladin Hector, fight our way to the big wins. Where we also get to take part in a fantastic mix of wonderful songs from the band Hammerfall, which creates an incredible atmosphere. It can land a large variety of symbols during the spins where 5 or more in a cluster of same symbol types create a winning combination.

The lower paying symbols consist of gems in the colors green, purple, blue, yellow and red. The higher paying symbols consist of a shield with a moon, two hammers, a shield with a sun and the paladin Hector. The game's wild symbol can help create more winning combinations and it consists of Hammerfall's logo which cleverly shows an H where you can extract the letters H and F from. The normal wild is in red and the lightning wild is in blue. Let's find out what the different features do.

In this great spinning adventure, you can win up to 30000X the bet. This will be possible with the help of the features which are Cascade, Lightning Wilds, Destruction, Song and Hammer High.

When you create a winning cluster with 5 or more of the same symbol type, the Cascade feature is activated. All symbols that were part of the winning cluster will then disappear from the reels and then new symbols will fall down to cover these empty positions. This continues as long as new winning clusters are created.

Something that you will notice during the spins is that some positions are highlighted behind the reels, so-called Super Tiles. When you create a winning cluster where there are Super Tiles, these positions will be awarded with Lightning Wilds. This wild then stays until the incoming cascade takes place, which can enable more winning combinations. To make it more exciting to land this Lightning Wild, it can come with a multiplier of up to 3X.

There are four different destruction features that you can take part in and any of these can be activated when you make a spin that doesn’t bring any win. These different features do the following:

Bring It! = This will either turn all Hector, Sun shield, Moon Shield and Hammers into the same symbol type or they will be destroyed.

One Against The World = This will randomly select a symbol type. Then the adjacent symbols will match this symbol or either be destroyed, activating the Cascade feature.

Never Forgive, Never Forget = This will randomly select a symbol type, then these will smash their way to the center of the slot. What happens is that all symbols that stand in the way will be destroyed, which enables an activation of the Cascade feature.

Chain Of Command = This feature will select a chain of symbols that are either destroyed or transformed into the same type of symbol, which can result in larger wins.

With a feature called just song, you understand very quickly that this is where you will get to experience the wonderful tones from Hammerfall. When you create winning clusters, the symbols that were part of it will be collected in the Hammer Charge Meter. If you manage to collect 25 symbols, a Song feature is activated. There are 3 different worlds that you can be in and depending on which one you are in when the Song feature is activated, determines which features you get to take part in. The 3 different Song features do the following:

Twilight Princess = This will add a Mega Wild to the reels, where its size is 2X2.

And Yet I Smile = If there is one thing that this slot is good at it is destroying symbols and if this feature is activated then all lower paying symbols will be destroyed.

Once you have completed a Song feature, you will be moved to a new world, which makes it possible to take part in another Song feature when it is once again activates.

This is the big grand finale of the features. By filling the Hammer Charge Meter with a total of 50 symbols, the Hammer High feature is activated. You will then get to take part in all 3 Song features in a row. Once you have experienced this, you will be moved to a new world once again.

Something that can be nice to know is that your progress within this slot will be saved, but after 90 days of inactivity, the progress will be lost.

This is a slot that at first glance you think will be an attraction for only all the Hammerfall fans out there. But it turns out that this slot is not a simple franchise slot, instead it is filled with well-thought-out features that truly create an exciting moment in front of the screen. There are a large number of mini features that you can take part in during the game that constantly create added value and entertainment. With features named after Hammerfall's various songs and atmospheric music played in the background, you get to take part in a virtual concert from this power metal band.

It is a high volatility which means that it can take longer before the bigger wins are generated but the patient player can manage to scoop up a giant maximum win of 30000X the bet. The Cluster pays together with the Avalanche feature really fits together perfectly, whereby creating these cluster wins you collect the symbols. It is really exciting when the Hammer Charge Meter is getting well filled, and you get closer to take part in its feature.

It is truly a slot that offers a wonderful mix of great features and fast-paced music, where it is guaranteed to attract many metal fans. But at the same time create many new metal fans after continuously listening to Hammerfall's songs during the spins, so make sure to turn up the volume before you play.