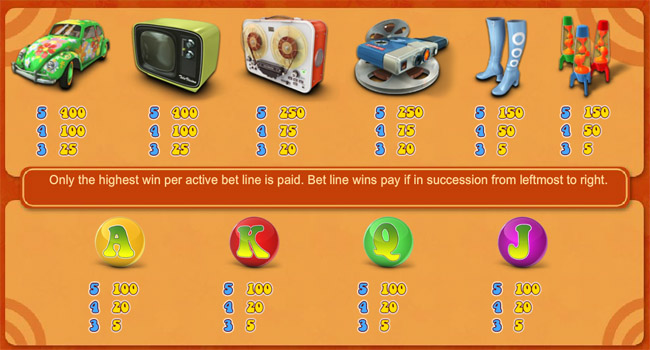 For all those feeling nostalgic about the 1960s, check out the Groovy Sixties video slot, created by NetEnt. Made with simple, but matching to the theme graphics, it transports you back in that colorful part of the modern history. Reminds you of love and freedom, especially with a happy tune in a background. So, if you're a fan, try your luck on the 5 reels, and 40 pay lines, presented in the game. Maybe you'll think it's a bit outdated, but the simplicity is the key when it comes to this decade.

Back to the Colorful 60s

Take a step into the past, and feel the joyful lines all around, brought to you in the Groovy Sixties package. As you do, this package will unwrap, and you'll have the opportunity to see a woman with the most enthusiastic smile on her face. With blue tones melting behind her, she'll land on the reels, and assume her Scatter role.

There, on the white surface, and inside the orange frame, you'll find other symbols in the 60s style. Among them, small, and old-fashioned green TV, a car with so many flowers on it, blue knee-high boots, a movie projector, a radio, and letters. All of them stand out in a bit cartoonish style, and with vivid different colors.

One more special symbol will appear, truly representing the theme, and that's the 60s Wild. These years were completely free, and wild, hence this special wild edition.

While the game is in progress, you'll be able to enjoy one soundtrack, delivered straight from the past. Graphics seem simple, but they fit the theme. And there will also be a few animations with the Wild. So, that's something to look forward to.

As already noted above, this is one Wild situation, and as such, it deserves matching features. Therefore, the Wild's role is to replace any symbol but the Scatter, and with a bigger number of these substitute symbols on each reel, the game becomes stacked with Wilds.

Are you a Fan of the Sixties?

The Groovy Sixties video slot appears simple and carefree, just like the time period in the title. It has nice enough graphics and a few animations, but mostly it gives an old-school sensation. The features are also basic, with special Wild's stacked version. There is a cheerful sound while you play, and if it gets old after a while, you can always turn it off. Considering all, if you'd like to go back to those much simpler times, soaked up in various colours, then give this game a go.