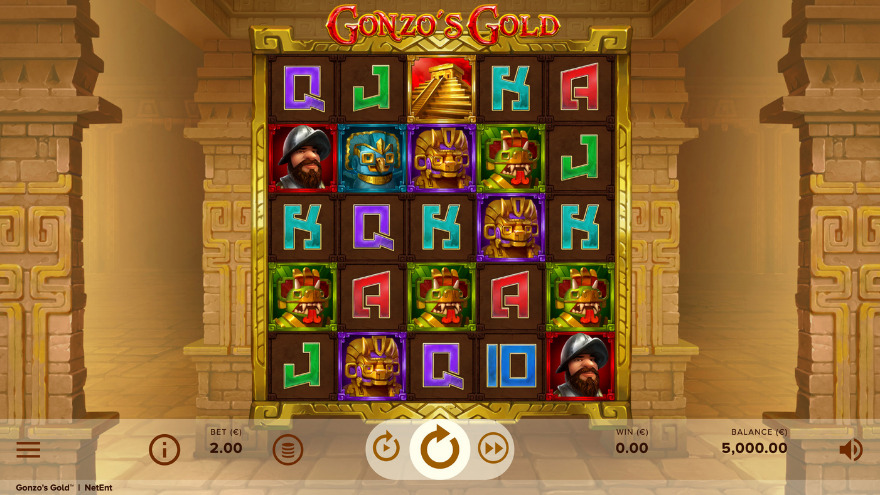 Gonzo’s Gold is a new casino slot from NetEnt where we once again get to take part in an exciting adventure together with the popular Spanish explorer. His adventure began as early as 2011, where a set of skilled designs and exciting features caught the attention of many, which would later result in it becoming one of the world's most played slots. There he visits the lost golden city within El Dorado, a visit that turned out to be so favorable that several return trips had to be made. We have previously seen Gonzo's Quest, Gonzo's Quest Megaways and Gonzo's Treasure Hunt, where the latter is a live game show from game developer Evolution.

It is certainly an adventure that has resulted in a lot of bonanzas over the years and one can believe that El Dorado should be depleted of gold, but that isn’t the case since there is still a huge gold rush here. Our dear explorer has now found a new place in this paradise that should be able to generate some really nice wins.

Gonzo’s Gold is a video slot from NetEnt that has 5 reels and 5 rows. It is cluster pays mechanic that apply, and it is created by landing 3 or more higher paying symbols in a cluster or 4 or more lower paying symbols in a cluster. You can choose between making a Min.bet of 0.10 and a Max.bet of 200. The game's RTP which is 96.11% by default can vary, so make sure to check what applies with your game operator before you start spin the reels. It is a high volatility, where you can win up to 6500X the bet.

There are few people who are as skilled at finding hidden gold as the adventurer Gonzo and within this slot we have a bunch of features that make the search for big wins easier. The features are Cluster Pays, Wild Symbol, Free Spins and Expanding Symbol.

The game's design consists of an adventurous theme where we get to follow the explorer Gonzo in search of great treasures. We go deep into a dense jungle, where the golden city of El Dorado is located, a place we have visited in previous slots with Gonzo. But this explorer has found new hidden places within this city that still glitter in gold. In the background of the slot, you can see pillars from the temple that we are in and during the spins a very atmospheric music is played. The hard and fast-paced drumbeats, the sounds of the flutes together with singing from the tribe captivates the player in front of the screen. You can play this slot on all the device’s mobiles, notepads and desktops. It is cluster pays that apply to this slot and you create a win by either landing 3 or more of the higher paying symbols in a cluster or 4 or more of the lower paying symbols in a cluster.

What is the max win in the slot Gonzo’s Gold?

What features are in the slot Gonzo’s Gold?

You create winning combinations by landing symbols in clusters with the correct amount. You need 4 or more of the lower paying symbols to create a winning cluster. The higher payers give profit already at 3 or more of the same symbol type in a cluster. It is a cluster if the symbols are in adjacent positions horizontally and/or vertically.

The game's Golden Temple symbol is both the wild and scatter symbol. This symbol helps to create more winning combinations by substituting for other symbols on the reels.

If you land 3 or more scatter symbols, the Free Spins feature is activated. You are then welcomed with 10 free spins and depending on whether you landed 3, 4 or 5 scatter symbols results in you also getting a direct win of either 2X, 20X and 200X the bet respectively. You can also receive extra free spins during this bonus game, where you get the same number of free spins and direct winnings per scatters as when activating the feature.

Before you can start using these free spins, you will have to click on one of nine question marks. Behind the selected question mark appears a symbol that will become your Expanding symbol during the feature.

If you land 2 or more of the assigned Expanding symbol, they will expand to cover an entire reel and row. You will then be able to take part in additional cluster wins that this results in.

The adventure certainly continues once again with this incredibly skilled gold finder, it is a character that really has made a big impression on casino slots and all this popularity is surely deserved. This time, NetEnt chooses to use a different structure and set of features compared to previous versions. We have a slot here with 5 reels and 5 rows, where it is cluster pays mechanic. That they have chosen to create winnings through different sizes of clusters depending on the symbol type is a small but nice touch. This time they have increased the size of the bet sizes where you can choose between 0.10 up to 200, which will certainly be appreciated among the high gamblers out there.

The RTP of 96.11% is a decent size, which is in class with the RTPs we have seen in previous Gonzo slots. But this RTP can vary with different gaming operators, which can change the conditions significantly. Something that you react to strongly, however, is the lower potential maximum win that has been chosen at 6500X, as the latest version had an incredible 21000X. It is admittedly a high volatility this time and even though 6500X is a decent potential max win, it feels low considering how high max wins this game provider usually offers.

In the base game you get to take part in very atmospheric spins, where the background music really does everything right. This game provider has since way back realized that the totality of a slot is incredibly important, where the music that consists of an ingenious combination of instruments and sounds is included. The game's scatter symbol is also the game's wild and it helps to create more winning combinations during the spins and within the latest slot the cascade feature offered a very exciting effect of the winnings, which is missing during the spins within this slot.

It is as usual in the bonus game that the bigger wins can be picked up more easily and by activating the Free Spins feature, you get to choose 1 of 9 face-down symbols. The selected symbol becomes the game's Expanding Symbol and it will be able to expand on the reels and rows when 2 or more of that symbol land together. This expanding effect can quickly cover larger parts of the screen, where it is reminiscent of the mechanics that have been seen in the Book of Dead. The symbols pay very high, where a filled screen with the Gonzo symbols pays the highest, more precisely 5000X the bet.

There will be slightly calm spins within the base game which together with the music builds up a real atmosphere and when you land 3 or more scatter symbols the true adventure begins. It is interesting to take part in a new set of features within this theme, but it sometimes feels a bit empty, where at least one cascade feature could have been added to give an extra spice to the spins. Gonzo is certainly a skilled gold hunter, but the question is whether it starts reducing with gold as the potential maximum profit is significantly reduced from the previous version. All in all, it's great to take part in a new slot with this beloved explorer and even if it's not in the same high-class as the Gonzo's Quest Megaways, it will definitely be a slot worthy of being placed in the Gonzo collection.

Gonzo’s Gold is a slot where we and the explorer are once again on the hunt for gold, but where this new temple has a bunch of new and exciting features to show us.