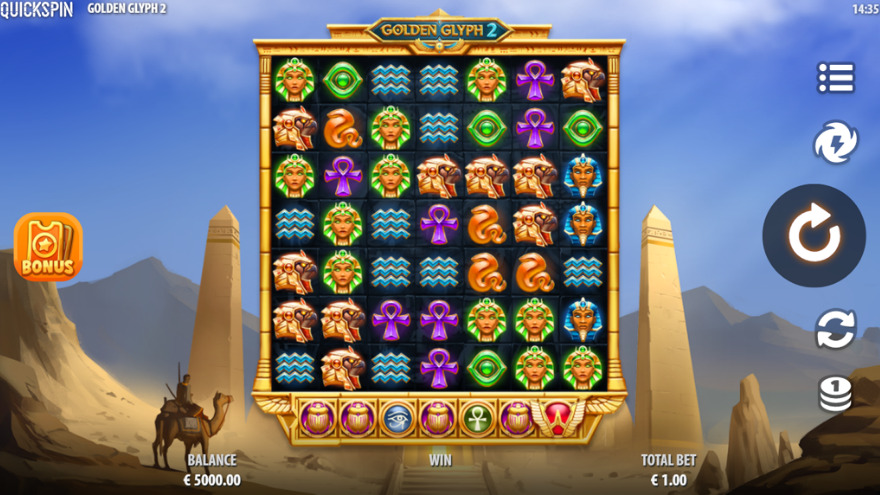 In this new casino slot from Quickspin, we once again head to ancient Egypt in search of the big wins. It is a slot that is a sequel to their previous Golden Glyph which then distinguished itself as being Quickspin's first cluster slot and at the same time being filled with exciting features. This time, among other things, new features have been added, nicely calibrated symbols and an increase of the previous maximum win of 13000X the bet to an incredible 29500X the bet has taken place.

Despite the long time since Egypt's heyday with pyramids, gods and power, many stories have been retold from this ancient time. This is thanks to all the hieroglyphs that have been left behind, which makes it possible to take part in this fascinating era. These hieroglyphs consist of the three different parts phonetic glyphs, logographs and determinatives, all of which form an essential part of the narrative and the delivering of information. Even though one has become increasingly better at interpreting these and their meaning, there are still many who are very complicated and thus constitute uncertainty. Anyone who learns to decipher and find the pattern among these glyphs can pick up lots of history, and in this slot lots of big wins.

Golden Glyph 2 is a video slot from Quickspin that has 7 reels and 7 rows. You create a winning combination by landing 5 or more of the same symbol type in a cluster. You can choose between making a Min.bet of 0.20 and a Max.bet of 100. The game's RTP has been lowered slightly from the previous version which then had an RTP of 96.19% and now it has an RTP of 96.09%. The game's volatility has gone from being medium (3 out of 5) to being medium/high volatility(4 out of 5). Although their previous slot was impressive with its high potential maximum win, this time they have more than doubled the potential maximum win, where the lucky player can now get up to 29500X the bet.

To be able to take part in this gigantic maximum win, we have a lot of different features to our aid. The features are Tumbling Reels, Power Glyph, Power-Up, Golden Free Spins Bonus and Bonus Buy.

The game's design consists of an Egyptian theme, where we in the background of the reels can see a desert landscape with high mountains, large pillars and a man riding a camel looking towards the stately slot that is located there. It is a very skillfully designed slot where the surroundings as well as the symbols are carefully designed. If you are looking for mobile slots online, then this game is a perfect choice as it is created to suit different devices like mobile and desktop. You get a win by landing 5 or more of the same symbol type in a cluster.

The lower paying symbols consist of 4 different hieroglyphs. The higher paying symbols are Tutankhamun, Cleopatra and Horus. The game's Wild symbol consists of a golden W and the game's scatter symbol consists of a pyramid with the text Bonus on it. During the spins you will get to take part in a large number of different Power-Ups where these different symbols have wonderful properties that can make you get closer to the big wins. Let's find out what those features do.

How much can you win in the Golden Glyph 2 slot?

What features are there in the Golden Glyph 2 slot?

You can take part in this feature in both the Base game and the Bonus game. You activate it by creating a winning cluster and then 1 Power Glyph will be placed in a position where the winning cluster was created. What then happens is that when a Power Glyph is removed, the next Power-Up will be activated.

With the help of this feature, your winnings can grow quickly, where you have 7 Power-Ups at each spin. The first 6 Power-Ups always consist of a mix between Golden Scarabs and Patterns of Horus. The 7th Power-up is always predetermined, where in the Base game you always have Gigantic Wild and in the Golden Free Spins Bonus you always have Golden Glyph. You can take part in the upcoming Power-Up when there are no more winning clusters.

These four different Power-Ups do the following:

Golden Scarab = You will get 4 to 10 Wild Symbols placed on the reels.

Patterns of Horus = This will remove symbols in a pattern, where the different patterns are cross, ankh, bird, eye, hourglass and snake.

Gigantic Wild = This will randomly place a giant Wild on the reels.

Golden Glyph = Just like its name, it shows up as Golden Glyphs, where 1 to 4 Golden Glyph Wilds will be placed on the reels. If you already have 4 Golden Glyphs deployed, you will instead receive 1 extra spin. You will always get 1 Golden Glyph on the first spin made within the Golden Free Spins Bonus feature and the special thing about this symbol is that it stays on the reels during the remaining spins made. It is a so-called Jumping Wild and will move with each spin made.

If you want to get directly to the Bonus game, you can use the game's Bonus Buy feature. You can then for different payments choose between 3 different modes that allow you to start with 1, 2 or 3 Golden Glyph Wilds, where their RTP is 96.30%, 96.49% and 96.60% respectively.

This sequel offers a once again action-packed journey, where we in this ancient place get to take part in mysterious glyphs that can give us really big wins. Quickspin's first edition of this slot, Golden Glyph, quickly became popular and has been played by over 1 million players worldwide. Choosing to make a sequel to this success felt very right and it is something that other game developers has done a lot lately, such as Push Gaming with Jammin' Jars 2. The appearance of this slot is very similar to its predecessor, where most of the symbols remain but they have had their design polished.

What makes both the Base game and the Bonus game very exciting is that each spin has 7 Power-Ups that you can take part in that make it possible to get bigger wins. The Golden Scarab which sprinkles wild symbols and the Patterns of Horus which removes symbols by pattern are found in both the Base game and the Bonus game. But the 7th Power-Up that you can take part in differs within these two modes, where the Base game lets you take part in a Gigantic Wild and the Bonus game has a Golden Glyph. It will be very exciting spins that are made, as you take part in several Power-Ups and gradually approach the grand finale, the 7th Power-Up. The game's Golden Glyph Wilds are once again the star of the game as they stay on the reels during the remaining free spins and continuously jump around to new locations.

It is a really carefully thought-out sequel where both the symbols and features have been polished a lot. That Quickspin also chooses to increase the potential maximum win from the previous 13000X the bet to be 29500X the bet really makes things even better.