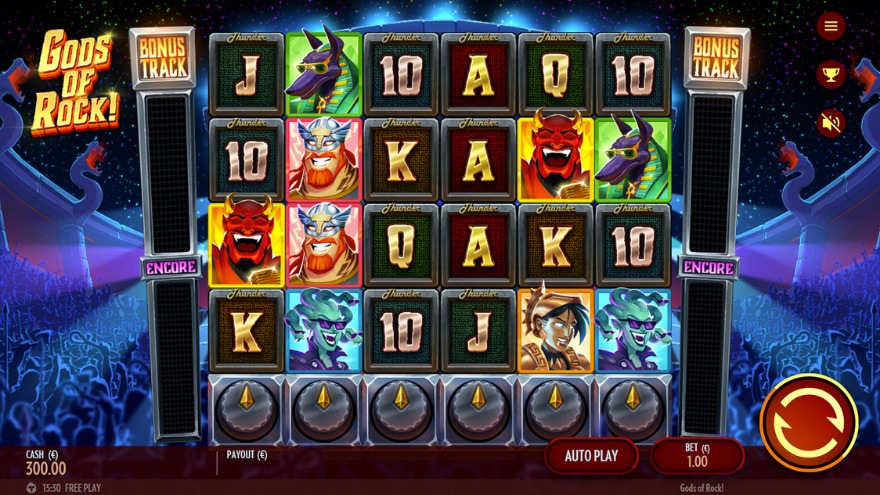 Gods of Rock is a new casino slot from Thunderkick where we get to take part in a mighty concert, where the most powerful gods have gathered to share their unexpected rock talents. The band consists of a mixture of the mythological creatures Lucifer, Thor, Medusa, Athena and Anubis, which once again proves what a wonderful and unifying effect the music has. With big names like these, you quickly understand that it will be a fast-paced and intense rock show, which is well reflected in the high volatility where you can win up to 20000X the bet.

We recently got to take part in another spectacular gig in the slot Rock the Reels Megaways, where a mix of different animals really created a real show. Where the various band members had various unique features to show us. It is with excitement that we dive into this slot and find out what this amazing mix of creatures can offer us during the spins.

Gods of Rock is a video slot from Thunderkick that has 6 reels, 4 rows and 466 ways to win. You can choose between making a Min.bet of 0.10 and a Max.bet of 100. It is an RTP that is around the average, where it is an RTP of 96.05%. During the spins you get to take part in a high volatility, which can give the lucky player up to an incredible 20000X the bet.

This slot offers a real show, where the band members together with some great features can make the stay very favorable. The features are Dropping Symbols, Wild Symbols, Reel Multiplier, Bonus Game and Wild Encore.

The game's design consists of a rock theme where we get to take part in a rock concert with a band consisting of Lucifer, Thor, Medusa, Athena and Anubis. In the background of the reels, you can see the large audience that intensely waves their hands to the music and the stage that the band is playing on consists of the reels. You can play Gods of Rock on all mobiles, notepads and desktops devices. You create a winning combination by landing 3 or more of the same symbol types on adjacent positions, which also can be a position above/below the other symbol.

What is the max win in the slot Gods of Rock?

What features are in the slot Gods of Rock?

There are two different wild symbols that can land during the spins, where they are normal wild and charge wild. These help to create more winning combinations by substituting for other symbols on the reels. The charge wild has an extra feature along with the reel multiplier.

This charge wild comes with an additional feature, each time it fills the reel multiplier, it will remove a bunch of symbols through an explosion. Which involves symbols in its vicinity, where there can be a minimum of 3 symbols and a maximum of 8 symbols. This charge symbol then falls down and lands on the underlying symbols or at the bottom of the reel, where it turns into a normal wild.

When symbols explode, a bonus meter is filled with the respective number of symbols that exploded. Once you have filled it with 56 symbols, the Bonus Game is activated. In the base game, the meter resets the collected symbols between new spins made, while the meter remains within the bonus game.

Once you have activated the bonus game, you are welcomed with 8 free spins, whereby refilling the meter you get 3 extra spins. Within this feature, the reel multiplier will remain during the spins, which increases the chances of winning really big.

When you fill up the bonus meter with 30 symbols, the Wild Encore feature is activated. You will then receive 1 to 3 charged wilds on the reels.

When these gods take the stage, it gets fast-paced already within the base game. Where you get to take part in a wonderful mix of symbols that together with 2 different wilds make the show even more festive. The two wilds have the same conditions regarding creating more winning combinations by substituting for other symbols. But the charge wild is spiced with some other wonderful features. It will namely explode when it has landed and possibly create new winning combinations, since 3 to 8 symbols disappear from the reels and leave room for new symbols to fall down. This charge wild then turns into a normal wild and also increases the multiplier on its current reel.

This reel multiplier joins us in both the base and bonus game, where each reel can have a maximum of 11X. Although with the help of the dropping symbols mechanic, you can take part in several new symbols during the same spin, it will be difficult to fill these reel multipliers to a higher value within the base game. It is within the bonus game that things truly change, where the multipliers obtained will stay during the remaining spins.

To increase the excitement and chances of bigger wins and multipliers, you can take advantage of the Wild Encore feature by filling up the meters on the side of the reels. Once you have filled up 30 symbols, the Wild Encore feature will be activated which will then sprinkle 1-3 charge wild symbols on the reels. Just as the multipliers remain during the spins, so does the currently collected number of symbols, which stay between the spins. Where this increases the chances of activating Wild Encore and also receiving extra free spins.

It is a slot that truly lives up to its hyped theme among mighty gods, where the reel multipliers can create a real show during the spins. We recently reviewed Golden Gallina which is based on a similar principle with reel multipliers. But even if it gave decent spins, this slot is in a completely different class, where godlike wins certainly can be created. The atmospheric music along with a skilled and captivating design, becomes the VIP package that together with intense features offers a powerful gaming experience. It is a generous potential maximum win of 20000X the bet, but where a high volatility can be very tilting from time to time and give nerve-wracking moments. But as they say, if you still look cute at the end of the concert you didn’t rock hard enough!

Gods of Rock is a slot from Thunderkick that contains a wonderful set of action-packed features, nice design and mighty band members.