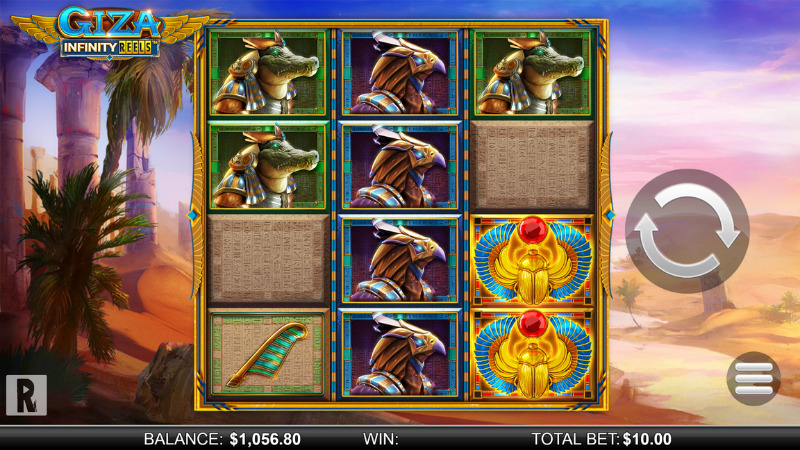 The Giza Infinity Reels slot is ReelPlay’s second release featuring Infinity Reels following its El Dorado Infinity Reels release which takes players to the gloomy, mysterious American jungle. In this game, players are taken to the stunning Giza desert plateau which is home to the most impressive pyramids ever made. To hop on this journey, players have to invest at least 0.20 credits per spin.

Here, Ancient Egypt deserts form the game’s backdrop. Alongside this beautiful scenery, the Giza Infinity Reels slot also features stunning palm trees, and the Nile depicted in the distance. The game’s soundtrack is a great mixture of traditional flute symbols with more modern jamming sounds. On the reels, players will come across all sorts of Ancient Egypt-inspired icons including Horus eyes, Ankhs, Sobek, and other ancient deities.

Harness the Power of Infinity Reels

The most common bonus feature in the Giza Infinity Reels is its Infinity Reels modifier. Whenever players score a winning combo, the game adds one more reel to the right side of the gaming grid. New reels are added to the same position for as long as players land winning combos. This is not everything as landing winning clusters also increase the game’s winning multiplier which starts at 1x and increases by one with every cluster.

The process continues until no new winning clusters are scored. At this point, the gaming grid resets to its initial setting with three reels. Moreover, once players reach fifteen reels, they are awarded a great jackpot worth 888x their stake which is added to any winning score they achieve. There is a Free Spins bonus included in the Giza Infinity Reels slot that players trigger with landing scattered pyramid symbols on the gaming grid in any position.

The bonus starts with 10 free spins. Here, the game’s winning multiplier is also active but it does not reset, but only increases or stays the same. Moreover, landing consecutive winnings also boost the rate at which the game’s winning multiplier increases up to five times. There are two more extras features in the Giza Infinity Reels slot including its Gamble Mode and Bonus Buy. With the Gamble Mode, players get a chance to boost their winnings while with the Bonus Buy feature, players get to skip the base game and activate the Bonus Game instantly for a fraction of their stake.

ReelPlay has done an excellent job with its Giza Infinity Reels slot which does not only impress with its great design but also with its awesome maximum winning of 10,000x players’ stake. The game’s medium to high volatility spinning actions surely promise thrilling adventures especially to players who enjoy Ancient Egypt-inspired games that come with innovative features. All in all, the game’s Infinity Reels guarantee some great winning opportunities.