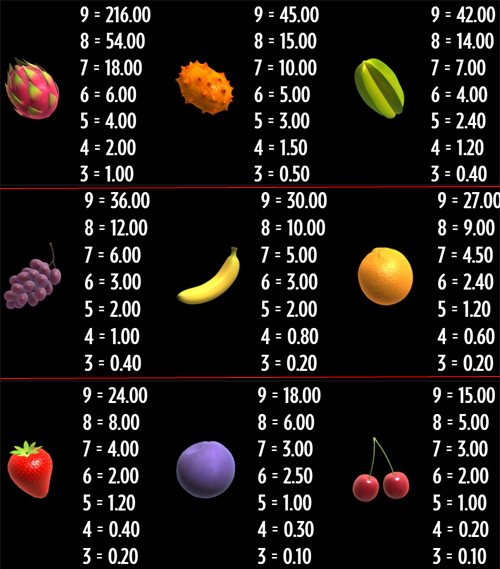 amazing 3D animations, top-notch graphics, and stunning visuals that most

some time warp tunnel, so from the very first moment of playing you know this

is far from being a classic game you might think it from the title. Unlike

other video slots, Fruit Warp has no reels or paylines, but the key is to get

combinations of three or more fruits on the screen. The game also features a

Warp Meter that once full will bring awesome multipliers your way.

A Unique Approach to Beloved

definitely something we have never seen before as it has no paylines or reels.

without any certain direction. As you start playing the game, you will see a

splatter of nine fruits flying around the screen. You get your hands on some

wins every time you land the same fruit on the screen more than three times.

More of the same fruits you land, more generous prizes you get. The game

black backdrop. All of the fruit symbols featured in the game feature vivid,

bright colors, offering a unique 3D effect during the gameplay.

jingly tunes that play in the background. There are also engaging sound effects

that accompany every winning combo. Despite the fact the game does not feature

Wilds or Scatters as we are used to seeing in video slots, it still offers a

massive winning potential thanks to the Fruit Warp bonus features.

Let’s Turn On the Fruit Mode

featured in the game include brightly-colored fruit symbols including Plums,

Dragon Fruit. The Fruit Warp has one bonus feature, the Fruit Modes you trigger

a kind fruit symbols will take you directly to the Fruit Mode feature. Getting

four of a kind fruit symbols will trigger the game’s Portal Re-spin mode, where

exchanged with new fruits to try and find the fifth, missing fruit to trigger

attraction of the game, the Fruit Mode starts as soon as you have those five

matching fruit symbols. Once you get there, a scale will appear underneath

multipliers until you come to the end. The way you have to move along the scale

every spin. You may also get an extra life on the way that will give you an

additional spin you can use once you fail to get a matching symbol. During this

mode, your winning multiplier can become quite significant and if you reach the

end of the feature, your base bonus win could be greatly increased.

Very Simple, yet Greatly Engaging and

slot by the Thunderkick is definitely a greatly unique

action-packed, memorable moments with each and every spin of the reels. In

terms of the gameplay, Fruit Warp is a simple game, yet greatly compelling and

engaging, especially once you trigger the Fruit Warp bonus feature that can

bring plenty of winning combos and awesome multipliers your way.