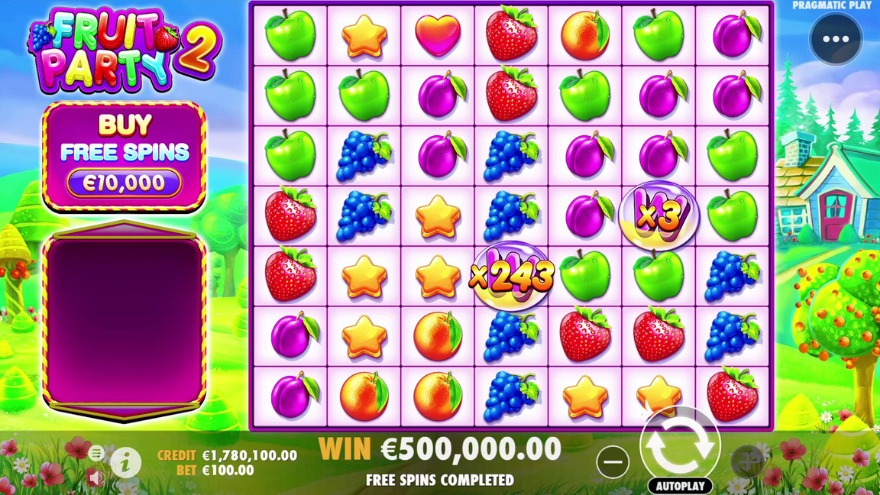 Fruit Party 2 is a new casino slot from Pragmatic Play where we get to take part in a sequel to their previously successful slot Fruit Party. A slot that with its nice colorful surroundings and multipliers has delivered many juicy wins since its release and has captured the hearts of many players. From a quick overview, you can see that it has the same potential maximum win as its predecessor, which is at 5000X the bet. So, let's dive into this fruity gaming adventure and find out what it contains this time.

Fruit Party 2 is a video slot from Pragmatic Play that has 7 reels and 7 rows. To create a winning cluster, land 5 or more of the same symbol type on adjacent positions. You can choose between making a Min.bet of 0.20 and a Max.bet of 100. It is an RTP of 96.53% by default which is very similar to the previous version which had 96.47%. It is a high volatility where it can take longer before winning clusters are created, but once they do, they are usually larger. During your spins you can win up to 5000X the bet.

In this fruity party, you can succeed in reaping really big profits and to succeed with this, there are a couple of features to help. The features are Tumble, Random Wild Multiplier, Free Spins and Bonus Buy.

The game's design consists of a fruit theme, where in the background of the reels we can see a green paradise where to the right you can glimpse a cottage and it is a large lush meadow. Fruit Party 2 can be played on all device’s mobiles, notepads and desktops. You create a winning combination by landing 5 or more of the same symbol type in a cluster.

What is the max win in the slot Fruit Party 2?

What features are in the slot Fruit Party 2?

When you spin the reels and create a winning cluster, the Tumble feature will be activated. Then the symbols that were part of the winning cluster will disappear from the reels and then new symbols will fall down to cover the empty positions. This continues as long as new winning combinations continue to be created on the reels.

The Wild Symbol helps to create more winning combinations by substituting for other symbols. The only symbol it doesn’t substitute for is the scatter symbol. When you create a winning cluster, a wild symbol can be randomly placed on any of the positions that these symbols were in, where it also has a 2X multiplier.

If you land 3 or more of the game's scatter symbols, the Free Spins feature is activated. Depending on how many scatter symbols you had at activation, you will receive different number of free spins, where the following applies:

During this feature you can get extra free spins by landing 3 or more scatter symbols, where you get 5 free spins for these.

Again, you can take advantage of the Random Wild Multiplier feature, but it comes with an upgrade this time. The wild is created in the same way as before, where it now starts with a value of 3X and each time it stays on the reels after a win, its value is tripled. The value that the wild multiplier can have is 3X, 9X, 27X, 81X, 243X and finally 729X.

If you want to get directly to the Free Spins feature, you can use the game's Bonus Buy feature. You then pay 100X the bet and will then land between 3 to 7 scatter symbols, resulting in you receiving between 10 to 25 free spins.

Pragmatic Play here comes with a sequel to their popular slot Fruit Party. It was launched in 2020 and quickly became a favorite among many and when we heard that it was time for a sequel, it was certainly juicy news. It turned out that most things are the same within this slot in terms of symbols, where they pay as much as before. But when it comes to successors, it's about finding the perfect balance between keeping old favorite features and calibrating it with a little new stuff, which gives new life.

This time, a wild multiplier symbol is introduced that can randomly land on winning combinations. If it then remains after participating in a win, it doubles the value within the base game. Within the bonus game, its value is tripled and can amount to an incredible 729X, where you can also use their Bonus Buy feature to get to this bonus game directly.

Something that was also noticed in the previous version was that several multipliers can be included in the same winning cluster and then their multipliers are added together and then applied to the win. Everything is so far really festive, but what makes one a little surprised is that Pragmatic Play chooses to keep the same potential maximum win of 5000X. Something that they could clearly have chosen to increase slightly, to create an extra excitement to the whole thing. Since an increase in the potential maximum win is almost an assumption when you hear about a sequel. It will not be the sequel of the year, but it will certainly be the slot that will replace the first version, as small but very nice adjustments have been made that can make one harvest some really juicy wins.

Fruit Party 2 is a slot where we can land wilds with progressive multipliers, which with cluster wins can give very nice wins.