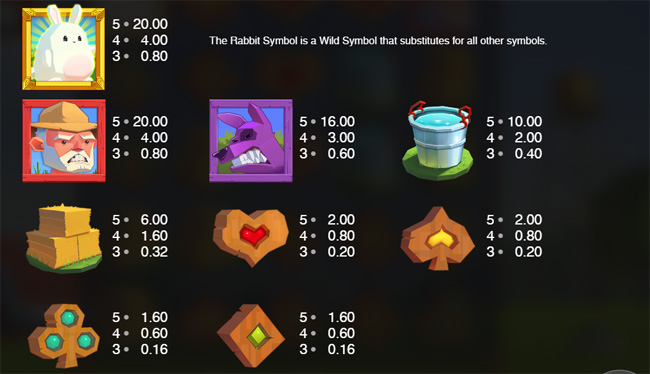 If you like slots with the farm theme, you should check out the Fat Rabbit

slot powered by Push Gaming. It has a happy and carefree note accompanied by

We have one Fat Rabbit jumping

around, stealing carrots and getting away with it. It has one angry farmer and

a dog on its tail, but it just keeps on coming. If you are looking for

something different and you like little fat mischievous rabbits, take a closure

look at this slot with 5 reels and 50 paylines.

Little devilish rabbit is sauntering and flaunting around like a big boss,

eating all the carrots, without sharing.

Make him give you some, try this slot, and have some fun.

While entering the farm where Fat

Rabbit lives, you probably won't be impressed with your surroundings. It is a

nice place, but nothing stands out. You can see an old Farmer, working hard on

his crops, a Dog by his side, a Bucket of Water, a Haystack and some other

stuff. You can hear birds chirping,

chickens clucking, and some entertaining sound in the background.

At some point, you can see a Fat

Rabbit popping out, and going straight for the Carrots. He is Wild, and for a

the Rabbit is picking Carrots, the rhythm

becomes faster, adding excitement to its mischief. When it is is done, it vanishes, leaving nothing behind.

The Fat Rabbit seems quite an ordinary slot when it comes to graphics and sound. There is a lot of

green and blue in the back, picturing one bright day on the farm. The symbols

have vivid colors with an accent on the orange carrot color.

When winning combos are triggered,

the symbols become animated. It looks pretty awesome. Especially the Carrots, which

become Wild on the reels. All the elements mentioned above form a subtle picture with one crazy Rabbit on the

prowl, causing havoc along its way.

HAS BEGUN AND THE RABBIT IS ON THE RUN

There are few interesting features in

this slot. The Harvest Feature starts randomly, while the reels are turning. A

tractor appears on your reels, plowing and leaving Wild Carrots randomly. When

that's all done, reels will spin again, and if you are lucky, the symbols will

If the Rabbit lands on the reels and

the same time, the Free Game feature will be triggered. This means you get 5

. The Fat Rabbit stays on the reels while the free spins last, and if

more Carrots land on the reels, the Rabbit will eat them.

Every Carrot that Rabbit eats will go

into the Carrot Meter, and after five eaten Carrots the Rabbit will grow. If

the Rabbit grows, you will get additional

free spins. If there aren't any more

Carrots to be eaten, the feature will be over. If there is, the Rabbit will

grow until it fills the reels completely,

progressing through several stages. Of course, the Rabbit is the wild symbol,

so you can expect some really big wins if you get it well fed.

Carrot symbols are wild and they can

replace any symbol, except the Rabbit. During Harvest Feature the Carrot

symbols are planted on the reels randomly, and they become Wild in contact with

other symbols. This way your odds of

JOIN THE FAT RABBIT IN HIS CRIME?

means business. Will you join him in his

prowls or not is up to you. But you should know first, he is worthy of your

attention. Even though he is a Fat Rabbit, he is quite spry.

The Fat Rabbit has entertaining music, lively animations, and

great features. The Harvest is the best

part of the year, gathering the fruits of your labor and earning your wages.

The Free Game feature will give you

an opportunity to gain even more, and give you the chance to feed the always

hungry Fat Rabbit, making both of you happy.