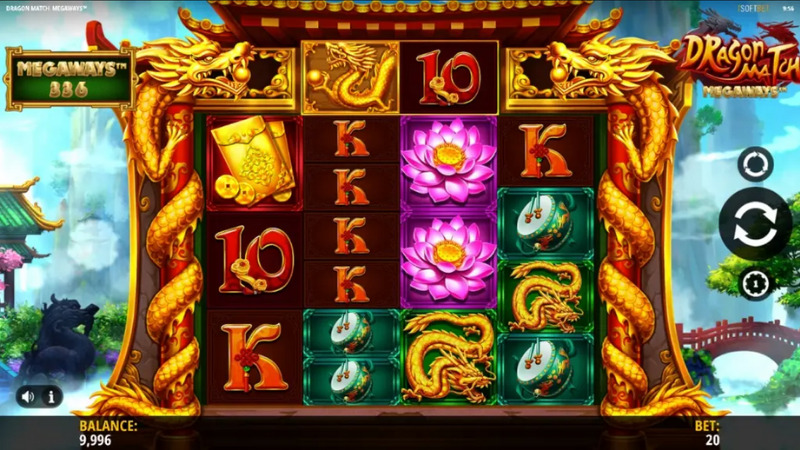 The Asian theme is one of the top used themes in the industry. Going along with the trends, iSoftBet released Dragon Match Megaways, a 4 reel slot with up to an amazing 3136 ways to win. As seen from the title, this is a Megaways release which means that even more is in store for you. The game also has amazing winning potential and a few features there to help the player out.

The providers managed to make the Asian theme, although it is often used, quite interesting. The Asian culture has a lot to offer and has inspired many slot games out there. In the end, it is up to the designers and their imagination to create a good looking game. This release is something new to see on the market, thanks to the great possibilities and features.

The background is simply beautiful where some traditional houses can be seen. There is also a river with a cute red bridge going over it. It is also visible that the autumn has come since there are orange, red, and yellow leaves on the trees in which the sun is hitting perfectly. The reels are, of course, a bright red color with two golden dragons guarding them from each side.

The symbols are just as interesting as the background and include the regular colorful royals as the lower-paying ones. The higher-paying ones include lotus flowers, drums, pendants, golden cymbals, and dragons. The game’s wild symbol is represented by a golden dragon shield and the scatter symbol appears in the form of a dragon match.

The payouts should satisfy most players since they go up to 20000 times the stake in a single spin. The betting range might not be for the type of player that likes to take more risks since it is on the lower side. The minimum bet is set at 0, 20 and the maximum at 20 coins per spin. This highly volatile game offers a 96,11% RTP which is average but acceptable.

The game has quite a few interesting features with some amazing winning potential to offer. They contribute a great deal in making the game stand out from the rest. First is the Cascading Wins feature familiar to us all. Winning symbols form a combination get removed from the reels allowing new ones to land in their place and hopefully create a new winning combination. As already mentioned, the game features a wild symbol that replaces all other symbols in the game except the scatter symbol.

The Dragon Match feature is triggered when the player manages to land 2 matching symbols on the same horizontal line. The two triggering symbols along with all other matching ones, turn wild in hopes of creating some great winning combinations.

Lastly, the game offers the Free Spins feature that is triggered when two Dragon Match symbols appear on the top reel. The player then gets to choose between 3 different options. The first awards 12 free spins and a multiplier that starts at x1. The second awards 8 spins with a x5 starting multiplier and the third is a random mix of the two other ones.

Enjoy the Greatest Marvels of the Orient

The providers made overall a great game. They managed to make a frequently used theme somewhat unique and definitely interesting. There are some creative features there that make playing the game a lot more fun and also bring amazing payouts with. The only downside, if it could even be called that, is the betting range that could have been a bit wider. The game delivers as promised and makes this trip to Asia worth taking.