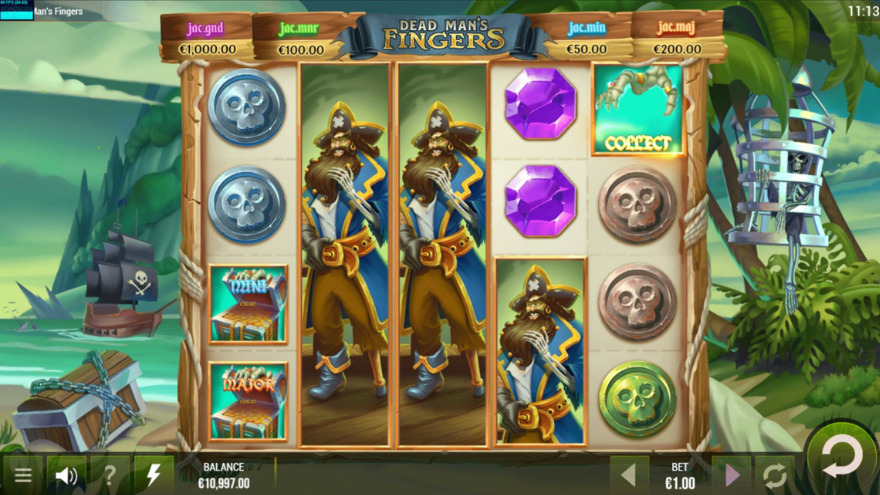 Dead Man's Fingers is a new casino slot from G. Games that has been created on Yggdrasil's YGS Masters platform. Within this slot we get to take part in a pirate adventure, where a curse has been brought to a crew of pirates. Their captain, the ghostly pirate, has amassed enormous treasures over the years and if we play our cards right, we can manage to get our hands on them. When it comes to pirate-themed slots, over the years this has usually meant feature-packed slots, where thrilling spins are on offer, where we have taken part in the Dead Man's Trail, among others. This time around, it's the Fingers of the Dead Man that's in the focus, so let's find out what else you can expect to see during the spins.

Dead Man's Fingers is a video slot from G. Games that has been created on Yggdrasil's YGS Masters platform that features 5 reels, 4 rows and 25 paylines. You can choose between a Min.bet of 0.25 and a Max.bet of 100. There is a lower-than-average RTP, where in this slot we have an RTP of 95.15%. Dead Man's Fingers has a hit frequency of 17.69% and a medium/high volatility, where you can win up to 2740X the bet.

Within this gaming adventure among ghost pirates, we have a couple of great features that can help us in the hunt for the big wins. The features are Wild Symbols, Cash Collect and Free Spins.

The game's design features a pirate theme, where we meet a gang of ghost pirates who have amassed large amounts of treasure over the years. In the background of the reels we can see, among other things, a pirate ship, treasure chest and a skeleton hanging from a palm tree, which comes to life during the night. You can play this slot on all the devices desktops, notepads and mobiles. You create a win by landing 3 or more of the same symbol types on adjacent reels starting at the far left. The highest paying pirate symbol pays already when you land 2 of it.

What is the max win in the slot Dead Man's Fingers?

What features are available in the slot Dead Man's Fingers?

The features are Wild Symbols, Cash Collect and Free Spins.

The game's wild symbol helps to create more winning combinations by substituting for other symbols, except for the scatter and cash collect symbols. It can only land on the reels 2, 3 and 4.

Within this free spins feature, there will be more quickhit money symbols and money collect symbols.

Within this slot among ghost pirates, you can manage to scoop up some big wins during the spins. The adventure starts already within the base game, where you can create more winning combinations with the help of the wild symbol and the symbols pays very well when you land 5 of the same symbol types. During the base game and bonus game spins, you can also land quickhit money symbols, which can have values of up to an incredible 1000X the bet. You can land several of these quickhit symbols at the same time and by landing the money collect symbol at the same time, you get to take part of these prizes. The game truly revolves around these different money symbols and by activating the free spins feature, the chances of winning big increase.

This is because the quickhit and money collect symbols will land more frequently within this bonus game, where you will also be welcomed with 10 free spins that can be retriggered to get extra free spins. Like the other slots that have been created by this game provider, it's a great design to take part of. Unfortunately, they continue to use a lower RTP and size of the potential maximum win, which certainly could have used an upgrade to bring more excitement to the slot. It's a slot that at times offers a good deal of entertainment, where the money symbols can award sudden bonanzas. But it's nothing exactly unique we get to experience here, where the well-used theme combined with the money symbols has been seen on numerous occasions before. It will be a slot that is clearly worth trying out, but players who enjoy pirate slots will quickly move on to more robust slots like Dead Man's Trail and Pirate Pays Megaways.

Dead Man's Fingers is a slot that, along with its money symbols, can provide sudden thrills, but it would clearly have been more exciting with better stats.