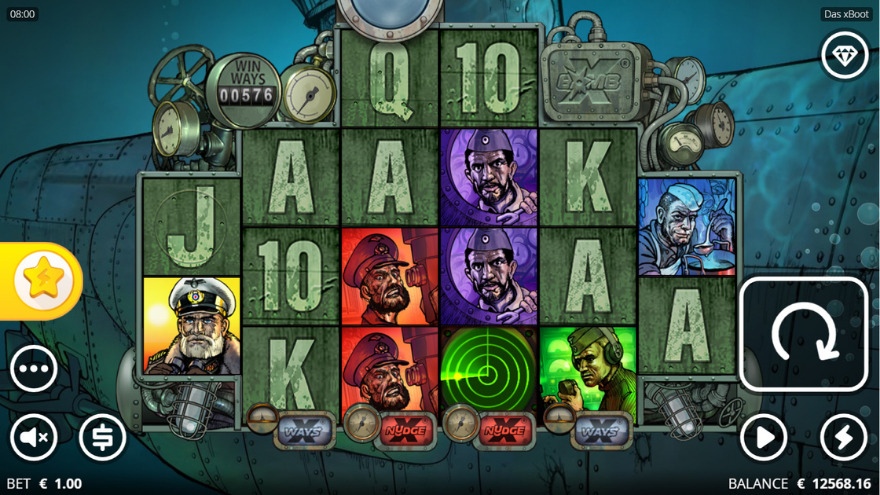 Das xBoot is a new casino slot from Nolimit City where we head out at sea in an exciting gaming adventure that takes place under the ocean. It is a slot where we once again get to take part in a completely new and creatively created theme among a tough crew on a submarine. Although it is very new, there are also a lot of familiar things we get to experience, where the mechanics xBomb, xNudge and xWays are on board. A set of mechanics that has been proved to create a huge amount of excitement during the spins, where we took part in xBomb before in Fire In The Hole xBomb.

At first glance, one might think that the life on a submarine below sea level should be quite peaceful, but the exact opposite was certainly proven when we took part in the hectic presence in the film Das Boot. Where we had the chance to accompany a crew on a submarine during World War II, where it is continuously attacked and sinking bombs lie around and wait to kiss their next victim. An exciting film with fantastic direction and this time we get to take part in a similar adventure, but with the premise of being able to obtain gigantic winnings if you get through the highly volatile spins that await there.

Das xBoot is a video slot from Nolimit City that has 6 reels and a row setup of 2-3-4-4-3-2 from the start, where its rows can increase further during the game, and together with the xWays mechanic many ways to win is created. During the bonus games, the row setup can increase to 2-3-8-4-3-2 and 2-4-5-5-4-2. Where this results in that 576 ways to win can be up to 75712 ways to win. You can choose between making a Min.bet of 0.20 and a Max.bet of 100. It is an RTP of 96.05% by default, but this RTP can vary with different game operators, so you should check what applies before you start play. The hit frequency is 22.07%, and you spin the reels with an extremely high volatility, where you can win up to the incredible 55200X the bet.

In this adventure deep under the sea, you can succeed in obtaining gigantic winnings that will be possible with the help of a wonderful mix of features. The features are xNudge Wilds, xWays, xBomb Wild Multiplier, Silent Hunter Spins, Wolf Pack Spins and Bonus Buy.

The game's design consists of a submarine theme where we get to accompany a crew on exciting gaming adventures deep under the sea. In the background of the reels, you can see the submarine, where the reels are surrounded by valves and meters. It is a slot that can be played on all the device’s desktops, mobiles and notepads. You create a winning combination by landing 3 or more of the same symbol types on adjacent reels starting at the far left.

What is the max win in the slot Das xBoot?

What features are in the slot Das xBoot?

During your spins, you can randomly land xNudge Wilds and these are 1X4 in size. If they land and are not fully visible immediately, they will nudge down until they are. Each nudge that takes place will increase the wild multiplier by 1X. This wild helps to create more winning combinations by substituting for other paying symbols on the reels. This xNudge wild can land on reels 3 and 4, but only on reel 4 within the Silent Hunter Spins feature.

The game's xWays symbols help to create more ways to win, since each xWays symbol that lands contain 2 to 3 symbols of the same type. If you land multiple xWays symbols at the same time, all of them will display the same symbol types. It can only land on the reels 2 or 5.

Just as the name reveals, this symbol has wild properties and thus helps to create more winning combinations by substituting for other paying symbols. When it lands, it will blow away the non-paying symbols, resulting in new symbols falling down to cover the empty positions. Before the next collapse, the win multiplier will increase by 1X.

If you land 3 scatter symbols, the Silent Hunter Spins feature is activated where you get 8 spins. Then you will receive 8 rows on reel 3, where this is similar to a periscope. By landing a winning combination together with a periscope wild on the reel 3, the torpedo launch sequence will be activated. If you hit the target, the wild will fill up to the top of reel 3 and then it will nudge down to cover its entire reel. As before, your multiplier will increase by 1X for each nudge that takes place at this moment. Within this, the xBomb will also add a multiplier to the total win multiplier that stays during the remaining spins that take place. Each time you land a scatter symbol within this feature, you get 2 extra spins.

If you land 4 scatter symbols, the Wolf Pack Spins feature is activated where you get 8 spins. Here you will be able to launch the torpedo when 4 torpedo parts have been collected for it. Where you can collect xWays and xWays wild symbols for it. On reels 2 and 5, the xWays can land and the xWays wild can only land on reels 3 and 4. When you land the first symbol, its respective symbol type will give 2 of it.

Again, you will be able to increase a win multiplier, where it increases by 1X each time you fire a torpedo. The xBomb will, just like in the Silent Hunter Spins, add a multiplier when activated to the total win multiplier. If you land this xBomb symbol at the same time as a torpedo part lands, the xWays addition to the torpedo win will increase by 1. Each time you land a scatter symbol within this feature, you get 2 extra spins.

Like most games from this game provider, you can use their Bonus Buy feature if you want to go directly to the Bonus games. Once inside, you can choose between different bonus features with different conditions that cost between 75X to 350X the bet.

That this game provider likes to explore new territory regarding themes and features is nothing new. This time we dive into the deep water and get to follow a submarine in an incredible action-packed gaming adventure. Like their other slots, there is an extremely high volatility and there can thus be many dead spins before wins are created. But once they are, they are usually of the larger kind. The theme that has been chosen is reflected very well and skillfully in the various features that you take part in, where in the Silent Hunter Spins you are assigned a periscope that can be activated and fire a shot at enemy ships. This little extra sequence that happens when a missile is fired at a ship, which in the event of a hit offers lucrative opportunities, certainly helps to create that extra excitement. The structure of the reels constantly changes during the spins and thus 576 ways to win can be up to 75712 ways to win.

Where an extended periscope helps to increase the number of ways to win within the Silent Hunter Spins, you can increase the rows within the Wolf Pack Spins through xWays symbols and also by charging a missile. Even if you can scoop up really big wins during the spins within the base game as well as the bonus games, it is through this missile that the really epic wins can be created. This missile is truly the crème-de-la-crème, where you collect xWays wilds and xWays symbols that will be activated at the same time. This enables a large number of ways to win and the composition of winning combinations also increase with the help of the wild characteristics. As a nice touch to this, you also have a win multiplier that resulted in many gigantic wins during our test. But as mentioned, it is an extremely high volatility and a fully charged missile happens very rarely, but once it appears, it becomes very festive, like a milder variant of a Jackpot.

It is a good level of potential max win that has been chosen within this slot, where you can win up to 55200X the bet during the spins and it is also a thankful size of the RTP that also increases during the bonus buys. The game's design and choice of theme is very fascinating, where its various visual effects and sounds add extra depth to the game. You are quickly captivated in front of the screen and the various xNudge, xWays and xBomb give a perfect feeling to this intense environment we are in. It's new and it's fresh, where players can take part in a bunch of lovely and innovative features. The extremely high volatility can be extremely tilting from time to time, where among other things the launch of the missile feels very distant as it can take a very long time before it is finally fired. But as they say, the one who waits for something good never waits too long.

Das xBoot is a slot from Nolimit City where the game's exciting theme is very skillfully adapted with suitable features, where a firing of a giant missile can result in GIANT WINS.