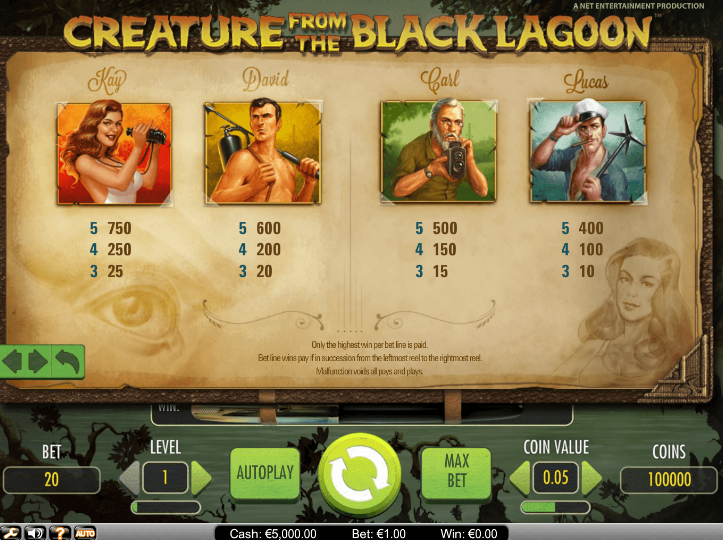 Creature from the Black Lagoon (NetEnt)

A twenty payline game, Creature from the Black Lagoon has five reels and is designed to look and feel like the old 50’s style of the original movie. The backdrop is the eerie lagoon, made mysterious and dark by overshadowing trees and dark undergrowth. The symbols for the game are also drawn and designed to fit the period and also the theme of the film. Everything is in an age-old sepia film tone. The symbols include a knife, old school video camera, breathing equipment, and lastly some binoculars. The four main characters of the film, Kay, Carl, Lucas and David, also appear as some of the symbols dressed in their outfits, again fitting the style of the film.

The soundtrack ebbs and flows with the game itself, much like the movie theme music. Soft music plays gently when game play is somewhat eventful, but this swiftly changes to a more orchestral dramatic piece when a winning combination is created. Occasionally a win is even followed by a quote from the film, which only serves to draw the player further into the story as it recreates that B-horror film feel. The graphics and animation are superb. Some lovely 3D effects in the form of the creature itself are interspersed throughout the game, adding to the surprise and thrill.

In case the creature of uncertainty is in danger of taking over, there are some quick game play points to make note of. Firstly, as it’s a fixed payline, the minimum bet here is €0.20 with a maximum of €100 per spin and a coin total between one and ten coins. Here the jackpot payout is set at 750 coins. Like most NetEnt games, this game can indeed be played on real money, but with a plethora of bonuses and options to win, this free play option is not really worth it except to get a little practice in. with an excellent RTP of 96.5%, it may not have a huge progressive jackpot like other Net Entertainment products, but this game is definitely one for those looking for consistent and easy payouts.

Winning Symbols and the Bonus Features

There are, as usual in a slot game, a few important symbols to be on the lookout for. The Wild, as represented by the game logo on a green box, and the spreading Wilds both look identical, except for one having a gold coloured background. There are also Sticky Wild symbols, all of which serve to make the game a little more complicated than usual with this amount of Wild options in play. The free spin is simply identified by Free Spin and it’s hidden in a bubbling blue box underwater, which also triggers the bonus feature.

Wilds are in integral part of this particular slot, and when they pop up in the main game they actually stay there on the reels for an extra free spin in the form of a Sticky Wild. The Sticky Wild can actually increase a player’s starting bet by up to 200 times! These re-spins will actually continue on until there are no new Wilds left on the reels. Even just this one round can help a player to win big without even moving on to the bonus round. Later these Wilds will as well play a strong role in the free spins part of the game.

To begin the Free Spins round there needs to be at least three Free Spin icons on the reels in any position. And with increasing numbers of the Free Spinsymbols, there are more free spins to be won; ten, fifteen or twenty, to be exact. Next comes an exciting clip from the movie. A dark and rather foreboding scene greets the player, with a boat alone on the lake. Soon we follow strange feet and legs that slowly creep aboard the ship. Then the creature itself climbs aboard the boat and grabs the character of Kay and disappears with her, as they plunge down into the watery depths of the lake. It is only then that the spins start.

Targets will soon start to appear on the reels as they are spun, and then so does the creature itself. When this happens it is time for the player to take shots with a harpoon and try to accurately shoot the creature. For each successful hit, the score is gradually increased and recorded on a damage or health meter on the side of the reels. With each hit, the Wilds become more powerful. For example, zero to two hits makes the Wilds sticky and keeps them frozen on the reels for one re-spin. Three to five hits mean that the Wilds spread over the reels one place to the left and they stay there for a re-spin. Six to eight hits cause the Wilds to spread one reel both left and right, and stay frozen for a single re-spin. Lastly, nine hits and the player will have acquired ten more free spins and Wilds that spread both left and right.

Sadly, with no mobile version available at this time, Creature from the Black Lagoon is still strictly a desktop affair. But be that as it may, this slot is a highly entertaining one. Harking back to those old Hollywood horror films, NetEnt does well in incorporating this entertaining little movie into a slot, thereby creating a more unusual game play that also allows for winning a little extra cash.

While it isn’t the highest paying game, many film enthusiasts will love it simply for its old-fashioned look and nostalgic feel, harking back to the golden era of Hollywood. Net Entertainment teamed up with Universal when they created this game, and it shows. The original feel is there in the perfect soundtrack, excellently drawn graphics and overall storyline from the film. This is an entertaining adventure getaway that can bring in some solid earnings, if the player is patient enough.