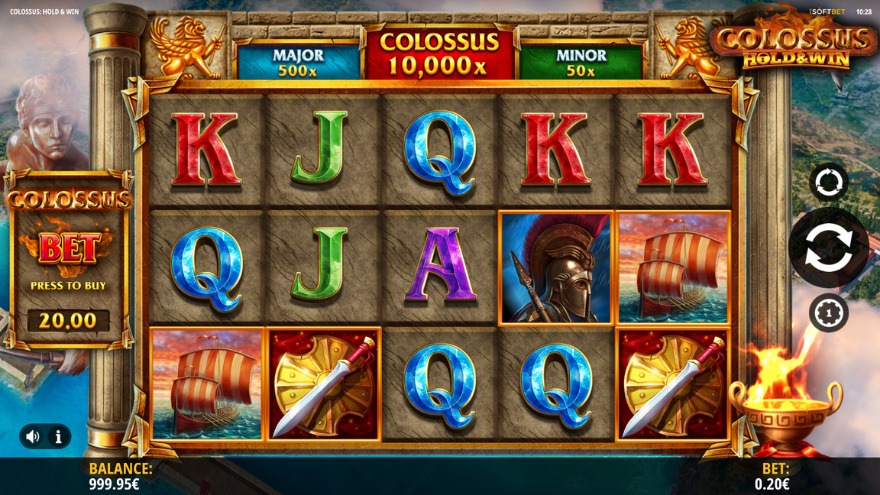 Colossus: Hold & Win is a new casino slot from iSoftBet, where we travel back to the ancient Greece, to a place where the beautiful Colossus of Rhodes is located. This was a statue of the Greek sun god Helios and is estimated to have been about 33 meters high, on par with the Statue of Liberty. Unfortunately, this was destroyed during a major earthquake, but fortunately within this slot, you get the chance to view this beautiful creation once again. We recently got to see this creation within the slot Helio's Fury, where a very entertaining bonus game with special wild symbols awaited. It has now become time for us to dive into this slot and find out what you can expect to see during the spins.

Within this gaming adventure among the mighty sun god Helios, we are helped by a couple of great features in the quest for the bigger wins. The features are Multiplier Wilds, Hold & Win Respins, Colossus Rising Flame, Colossus Spin and Bonus Buy.

The game design is based on an ancient Greece theme, where we meet the Colossus of Rhodes. In the background of the reels, you can see this gigantic statue and also glimpse this port city. You can play this slot on all the devices mobiles, notepads and desktops. You create a winning combination by landing 3 or more of the same symbol types on adjacent reels starting at the far left.

What is the max win in the slot Colossus: Hold & Win?

What features are available in the slot Colossus: Hold & Win?

The game's wild symbol helps to create more winning combinations by substituting for other symbols, except for the coin symbols. When it lands, it will expand to cover the entire reel and also receive a multiplier of either 2X, 3X, 5X or 10X. It can land on the reels 2, 3, 4 and 5, where you also can land several multiplier wilds at the same time, and their multipliers being multiplied by each other before being applied to the winnings in such cases.

If you land 6 or more coin symbols at the same time, the Hold & Win Respins feature is activated. These coin symbols have different values based on a predefined set and the ones you had at activation remain in their positions. You will then start with 3 respins and each time you land one or more coin symbols, the number of respins will be reset to 3 again. Within this bonus game, the Colossus Rising Flame and Colossus Spin can also be activated.

During your spins within the Hold & Win Respins feature, the Colossus Rising Flame feature can be randomly activated. When this flame flares up, either 2X, 3X, 5X or 10X will be applied to all coin symbols, giving a boost to the final payout.

If you manage to fill all positions on the reels with coin symbols, the Colossus Spin feature will be activated. Then you will receive a spin on the special wheel, where you will receive one of the awards Minor 50X, Major 500X or Colossus 10000X.

Within this slot we meet the beautiful statue Colossus of Rhodes, which reflects the Greek sun god Helios. It's a gaming adventure where we once again get to enjoy iSoftBet's Hold & Win mechanic, where together with a very lucrative multiplier wild it can create huge wins. During the base game you play with a 5X3 reel setup, where a nice mix of different symbols can land on the reels. Among these symbols, we find the multiplier wilds and when it lands it will expand to cover the entire reel. What makes this symbol extra special is that it can land with a multiplier of up to 10X and it can also land more than one at a time, making it possible to get high paying wins.

By landing 6 or more coin symbols, you can take advantage of the Hold & Win Respins feature, within which you will start with 3 respins and each coin symbol that lands will be locked in its position. These coin symbols have some decent values from the start, but with the help of the Colossus Rising Flame feature, their values can get a big boost with a multiplier of up to 10X being applied to them all. What you are aiming for is to fill all positions with coin symbols, because then you will get to spin on a special wheel that awards one of the three jackpots of 50X, 500X or a whopping 10000X the bet. It's a slot that has a good sized RTP and the gigantic potential maximum win is a wonderful addition to the slot itself. The adventure starts already within the base game, where the multiplier wilds can stand for many thrill-filled spins and in combination with the lucrative Hold & Win Respins feature, the stay in Rhodes becomes very festive many times. There are no really impressive graphics and design to take part in here, but its nerve-wracking gameplay brings new life to this well-used Hold & Win feature.

Colossus: Hold & Win is a slot we along with the sun god Helios can scoop up some godlike wins using the mutliplier wilds and hold & win respins features.

Curse of the werewolf