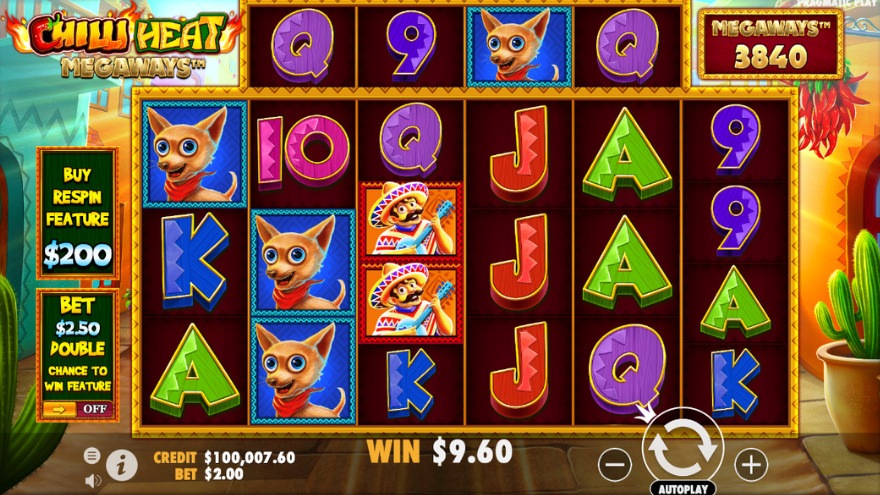 Chilli Heat Megaways is a new casino slot from Pragmatic Play where we once again head to the lively streets in Mexico. A place that has received an upgrade with Megaways and other features since our previous visit to the slot Chilli Heat. Where its wonderful atmosphere, simplicity and wonderful gameplay quickly captured the hearts of many and has since its release back in 2018 been a great success. This time, Pragmatic chooses to double the potential maximum win and add a really spicy feature in the form of Megaways, let's find out what more we can expect to see within this slot.

Chilli Heat Megaways is a video slot with 6 reels and 2 to 8 rows. It is thanks to the Megaways mechanic that the number of rows can vary, and it can give up to 200704 ways to win. You can choose between making a Min.bet of 0.20 and a Max.bet of 125. The game's RTP is 96.50% and remains the same through the normal game, ante bet, and bonus buy. It is like most games from this game provider a high volatility, where you can win up to 5000X the bet.

On this festive street where the slot is located, we get help from a bunch of wonderful features in the hunt for the big wins. The features are Wild Symbol, Tumble, Respin, Ante Bet and Bonus Buy.

The game's design consists of a Mexican theme, where we on a very atmospheric street get to take part in tactful music that makes one sit and sway. In the background of the reels, you can see colorful houses, cactuses and swinging chilis. You can play this slot on notepads, mobiles and desktops. You create a winning combination by landing 3 or more of the same symbol type on adjacent reels starting at the far left.

What is the max win in the slot Chilli Heat Megaways?

What features are in the slot Chilli Heat Megaways?

This symbol helps to create more winning combinations by substituting for other symbols. The only symbol it doesn’t substitute for is the Money symbols and this symbol can only land on the reels 2, 3, 4 and 5.

When you spin the reels and land 6 or more Money symbols, the Respin feature is activated. Each Money symbol has a value that is from a predefined set based on your bet size and these symbols can land on all positions except the top reel.

You are then moved to a new location where the Money symbols that activated the feature remain, but all other symbols disappear from the reels. In this place the reels 1 and 6 are locked and it can only land different Money symbols or empty positions. You then start with 3 respins and each time a Money symbol lands, the respins are reset to 3 again. The symbols that land get locked during the remaining spins and you continue until you have filled all the reels with Money symbols or have run out of respins.

On the top reel, special symbols can land, where these have wonderful properties that create an extra excitement to the spins that are made. They are and do the following:

Gold lock that tilts to the right = This unlocks reel 1.

Gold lock that tilts to the left = This unlocks reel 6.

Up and down arrow = This increases the number of rows below it to 7 for the remaining spins made.

Arrow down within a circle = This one collects all the Money symbols on the reel below it and adds it to the total win.

Down Arrow within a square = This collects all Money symbols on all reels and adds it to the total win.

An X within a circle = This will randomly assign all Money symbols below it with a multiplier of either 2X, 3X, 5X or 10X.

An X within a square = This will randomly assign all Money symbols on all reels with a multiplier of either 2X, 3X, 5X or 10X.

When this feature is completed, you will get to take part in all of the Money symbols and collected values from the spins. If you achieve the maximum win of 5000X before the feature is finished, the feature will end and pay out the maximum amount.

If you want to increase your chances of activating the Respin feature, you can use the Ante Bet. You then pay 25% extra of your current bet and thus double your chances of activating the Respin feature. This is because more Money symbols will land but the value of all symbols pays as much as if you had made a normal bet and within this feature the RTP remains 96.50%.

If you want to get directly to the Respin feature, you can use the Bonus Buy feature. You pay 100X the bet and then land a random amount of Money symbols that activate the bonus feature.

It will once again be a hot gaming adventure with this slot, where you are quickly put in the mood when the game starts. The base game offers decent wins from time to time, where the chihuahua symbol and the Mexican man pay really well. Namely 6.25X to 10X if you land 6 of these at the same time. As always, The Megaways mechanic goes very well with the Cascade feature, which can make the individual spins very long-lasting and, above all, rewarding. What you are constantly waiting for is to succeed in activating the Respin feature and you also have the Ante Bet and Bonus Buy as help if you want to reach the Bonus feature faster. It is activated by landing 6 or more Money symbols that have different values based on the current bet size.

We also got to take part in this type of Respin feature in the previous version, but something that you quickly notice is that this time the various big Jackpots that you could previously manage to take part in are missing. Instead, they have added various special symbols that can spice up things during the spins. Those symbols can unlock extra reels, add multipliers and collect Money symbols. All these symbols really give a good touch to the Respin feature and it is thus quite forgiving that they removed the Jackpots. But the more the marrier, so a cocktail with the old features and these new ones would have become an ingenious move.

The Megaways mechanic will be the big difference that makes the grid significantly larger and allows more symbols to land, where they have also doubled the potential maximum win to 5000X the bet. The RTP and the bet sizes remain the same, with this sequel from Pragmatic Play being the upgrade that the previous success deserves.

Chilli Heat Megaways is a slot where we visit the lively street in Mexico, where an upgrade has taken place on the hot slot in the form of, among other things, Megaways mechanics and higher max winnings.