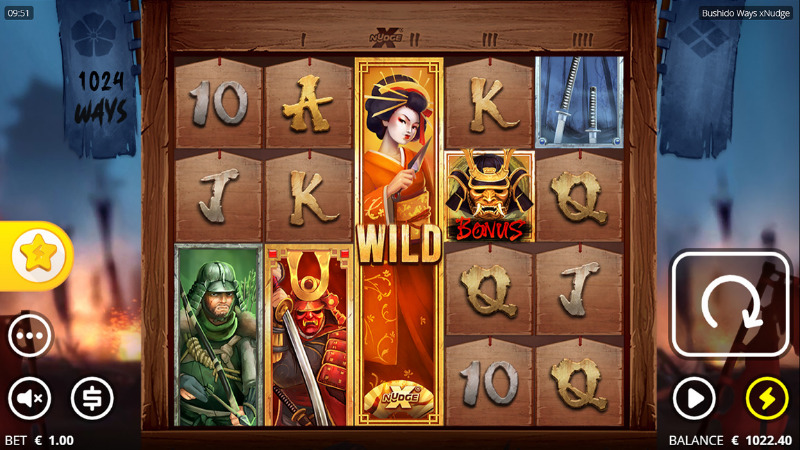 In this new online slot from Nolimit City, we head to Japan at a time when the Samurais still existed. They consisted of very skilled soldiers who, with the help of their two swords and war skills, made it almost impossible for their opponents to defeat them. It was very noble to be a samurai and they were paid very well for the various services rendered during their existence between the beginning of the 13th century to the 1870s. Even though they were very skilled in battle, it was their mentality that got them judged, since all samuari used the moral code Bushido. A code that they frantically followed regarding lifestyle, attitudes and behavior.

They are truly a type of soldiers who has fascinated many of us through times and despite the cessation of their physical existence at the end of 1870, their moral codes live on. Where this time we get to see them in the new Bushido Ways xNudge from Nolimit City, a slot that can bring great prizes.

Bushido Ways xNudge is a slot from Nolimit City that has 5 reels and 4 rows. During your spins, 1024 ways to win can be up to 24576 ways to win. This increase can be done thanks to the xWays mechanic, which is a surprise element that can deliver ways expansion in a fixed ways game. You can choose between making a Min.bet of 0.20 and a Max.bet of 100. Bushido Ways xNudge has an RTP of 96.10%, Hit frequency of nearly 25% and a high volatility. Nolimit City has really started 2021 in a fabulous way, where we in all slots have an opportunity to take part in big max wins. In this slot there is a potential to get up to 30000X the bet.

When it comes to the number of features, there is no shortage, neither in the number nor the creativity behind them. The features you can take part in here are Shogun Spins, Geisha Spins, Wilds & Sliced Wilds, Oni Transform and Bonus Buy feature. Let's find out what you can expect to see during the spins.

It is a really mood-enhancing game design, where in the background you can blurrily see a war that takes place with raised flags and burning objects. The reels are surrounded by a wooden frame where you can see the current number of ways to win on a flag on the left. During your spins, a variety of symbols can land on the reels.

The lower paying symbols consist of 10, J, Q, K and A which are drawn in Japanese style. The higher paying symbols consist of Samurais in the colors red, blue and green. All of these Samurai symbols are 4X1 in size and can contribute to big winning combinations. The wild symbols are an open hand fan that shows the word Wild and this symbol will really have a big meaning during your spins, where with the help of the samurai's slice skills it can enable many winning combinations. Among them, a stacked 4X1 wild can appear that shows a very elegant Geisha holding a dagger. The game's scatter symbol consists of a Kabuto helmet with the text Bonus on it. Let's dive into the features section which gives us a better insight in what the different features do.

This is a slot that can give the lucky player a win of up to 30000X the bet. Where this is possible through the features Shogun Spins, Geisha Spins, Wilds & Sliced Wilds, Oni Transform and Bonus Buy feature.

If you land 3 scatter symbols, the Shogun Spins are activated. You are then welcomed with 8 spins and for every extra scatter you had, you get 1 extra spin. Shogun is the name of the leader for the army and of course the feature is therefore good. You are guaranteed to land a wild on each spin on reel 2, 3, 4 or 5 to enable more winning combinations.

On the middle reel, ie reel 3, a Wild Geisha symbol can land. This is in size 4X1 and if it is not completely showing when it lands, it will nudge down. If you land 3 scatter symbols along with a Geisha symbol in either the base game or Shogun spins, then the Geisha Spins is being activated. This again gives 8 spins where you get 1 extra spin for each extra scatter symbol you landed. You can also manage to get even more spins when the Geisha Wild nudges to cover the entire screen. For each nudge that takes place, a sticky multiplier will increase and the number it finally shows corresponds to the extra spins you will receive. At these spins you are guaranteed to land 1 wild on either reel 2, 4 or 5 and for each Bonus symbol that lands you get 1 extra spin.

The wilds are truly the highlight of the game as you can manage to get a huge amount of these. In the usual order, the Wild symbols help to create more winning combinations by substituting for all other symbols, except for the scatter symbol. They can land as 1X1 symbols on the reels 2, 3, 4 and 5, where they will be sliced into several more depending on which reel they landed on. When they land on reel 2, they are not sliced, but on reel 3 they are sliced to 2 wilds, on reel 4 they are sliced to 3 wilds and on reel 5 they are sliced to 4 wilds. Although this already sounds incredibly festive, these wilds will be even better within the Geisha & Shogun Spins, as all wilds that land will be copied down to the bottom of the reels before a potential slice occurs.

Bushido may be a moral code that the samurai disciplinedly followed regarding behavior and actions, but Nolimit City also seems to follow some similar form of Bushido. Since they continuously deliver the most groundbreaking games, which maintain a very high standard. In recent times we have had the opportunity to take part in games such as Fire In The Hole xBomb, East Coast vs West Coast and also San Quentin xWays. In which all offer incredible entertainment as various enhancers and mechanics help to create greater conditions for making big wins. They are reminiscent of the structure that Push Gaming has in their slots, where a very high volatility can result in many dead spins, but the patient soul can eventually be lucky and get a big win.

If you like to see wild symbols help create more winning combinations, then you will be truly satisfied in this slot. With the help of its ability to be copied in the Shogun & Geisha spins, as well as the slicing effect that occurs when they land on different reels, it will be crowded with a lot of wonderful wilds. This results in that the number of ways to win can increase from 1024 to 24576. Nolimit City really maximize their slots and it can take a while before you really start to understand how everything works, but everything slowly falls into place during the spins that are made. It is a very exciting theme that has been chosen and the fact that you have an opportunity to take part in a win of up to 30000X the bet is absolutely incredible.

The samurais disappeared more and more due to their lack of adaption to the newer times that came, but this time they come back more up to date than ever with their amazing features.