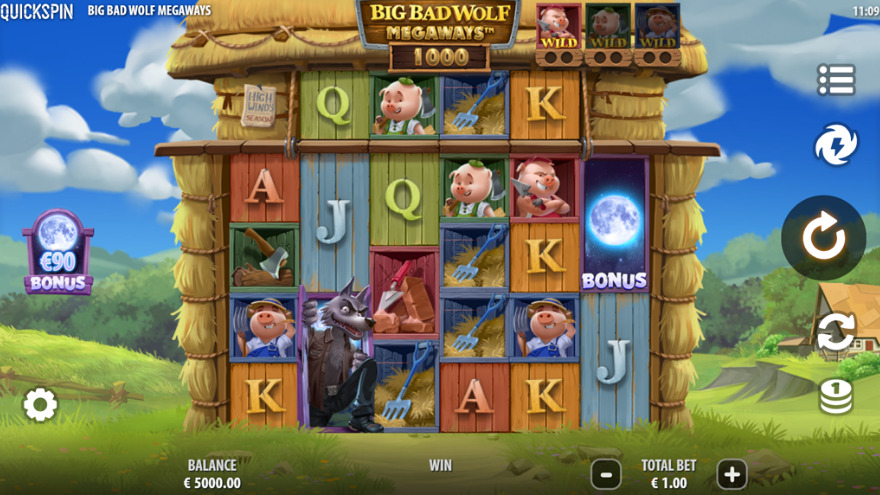 Big Bad Wolf Megaways is a new casino slot from Quickspin where we once again get to take part in a mind-blowing gaming adventure. The three little pigs are back in town and also a very stubborn wolf, where the pigs are fighting for their survival and the wolf is looking for a yummy meal. We were introduced to the classic Big Bad Wolf already in 2013, where it over the years has captured the hearts of many with its unique approach regarding features and theme. It quickly became a success, where many players over the years have tried their luck at this slot and in the winter of 2020, the sequel Big Bad Wolf Christmas Special was released. Just as the name reveals, it was a slot that was targeted for the Christmas season, where they had added a few gifts in the form of, among other things, higher max win and customized theme.

That sequel also became a slot that was well received and despite all these years that the Big Bad Wolf had been on the market, it was still much appreciated. But if there was one thing that was certainly right in time, it was to put in a higher gear and make the game even more competitive against its competitor. With a substantial upgrade in the potential maximum win to 30540X and a Megaways mechanic, it will be very exciting to dive into this slot and find out what more we can expect to see during the spins. The wolf's dedication to year after year still hunt for these 3 little pigs is impressive, the question is whether this is the time he succeeds, third time's charm as they say.

Big Bad Wolf Megaways is a video slot from Quickspin that has 6 reels and 2 to 7 rows. This variation in the number of rows is due to the game's Megaways mechanic, where this variation in rows can give up to 117649 ways to win. You can choose between making a Min.bet of 0.20 and a Max.bet of 100. It is an RTP of 96.05% by default, but this RTP can vary, so check what your gaming operator uses before you start playing. If you use the game's Bonus Buy feature, the RTP will increase to 96.44%. The volatility of the game has increased within this slot, where there is now a high volatility and the lucky player can win up to 30540X the bet.

Within this slot, much is similar to current features, where the game provider has chosen to optimize it by adding some great features. The features are Megaways, Tumbling Reels, Wild Symbol, Piggy Wild, Blowing Down the House Bonus Game and Bonus Buy.

The game's design consists of a theme with the iconic three little pigs and the big bad wolf. During the base game you can see a very peaceful place in the background that shows a green meadow where large white clouds peacefully hover around. But when the bonus game is activated, this environment changes quickly into the night and the hungry wolf arrives. You can play Big Bad Wolf Megaways on all the device’s mobiles, notepads and desktops. You create a winning combination by landing 3 or more of the same symbol type on adjacent reels starting at the far left.

What is the max win in the slot Big Bad Wolf Megaways?

What features are in the slot Big Bad Wolf Megaways?

The Megaways mechanic will generate a random number of symbols that land on the reels during the spins, resulting in you getting to experience different numbers of ways to win at each spin. You can get up to 117649 ways to win by filling all 6 reels with 7 symbols.

When you create a winning combination, the Tumbling Reels feature is activated. Then all the symbols that were part of the winning combination will disappear from the reels and then new symbols will fall down to cover these empty positions. This continues as long as new wins are created.

The wild symbol helps to create more winning combinations by substituting for other symbols. The only symbol it doesn't substitute for is the scatter symbols and it can only land on reels 2, 3 and 4.

During your spins, more wild symbols can be created. By making 2, 4 and 6 tumbles, the first, second and third piggy symbols will turn into wilds. Where these can land on the reels 2, 3, 4 and 5.

If you land 3 scatter symbols, the bonus game is activated. You will then be welcomed with 11 free spins and you will receive a win multiplier. This multiplier starts at 1X and with each win created, it will increase by 1X. The great thing about this win multiplier is that it isn’t reset between the spins that are made.

During these spins you can get extra free spins by collecting the right amount of scatter symbols. You will then receive the following:

3 scatter symbols = You get 3 extra free spins and your win multiplier increases by 5X.

This is truly a slot where Quickspin has found a perfect balance between preserving a classic but at the same time giving it new life with the help of necessary upgrades. The predecessor Big Bad Wolf is a slot that is close to the hearts of many players, but to keep up with the competition, some adjustments needed to be made. The previous versions had potential maximum wins of 600X and 1268X respectively, where it this time has been increased to 30540X the bet. By increasing this, volatility has also naturally become high. One of the things that has made Big Bad Wolf stand out in the past has been their high RTP, this time it has been lowered slightly to 96.05% and through the Bonus Buy 96.44%, which is still a decent level to have on the RTP.

There has been a very smooth transition to the Megaways mechanic, where it merges in a very elegant way with the previous features that have been. During the spins within the game, you get to take part in a much larger reel setup this time where you can get up to 117649 ways to win and all symbols have received a lot of love in the design of them. Where these symbols along with the effects as well as the background give a fresh look to the game.

There are two options to get to the bonus game, where you can either land 3 scatter symbols or activate it by paying 90X the bet. Either way, it's a very lucrative game that awaits. You are then welcomed with 11 free spins and within this feature you will start with a win multiplier that increases with each win that takes place. Whereby landing the right amount of scatter symbols you can get more multiplier and extra spins. The three little pigs can, as in the previous versions, become wilds by getting the right number of tumbles in a row, which gives the opportunity to create many winning combinations. It is a slot that certainly has received a well-calibrated and well-thought-out upgrade. Where much is the same but where the new added features that have taken place make the game very relevant on the market, regardless of whether you are familiar with previous versions or not.

Big Bad Wolf Megaways is a slot where Quickspin has thought through every little detail to make the gaming experience as maximized as possible.