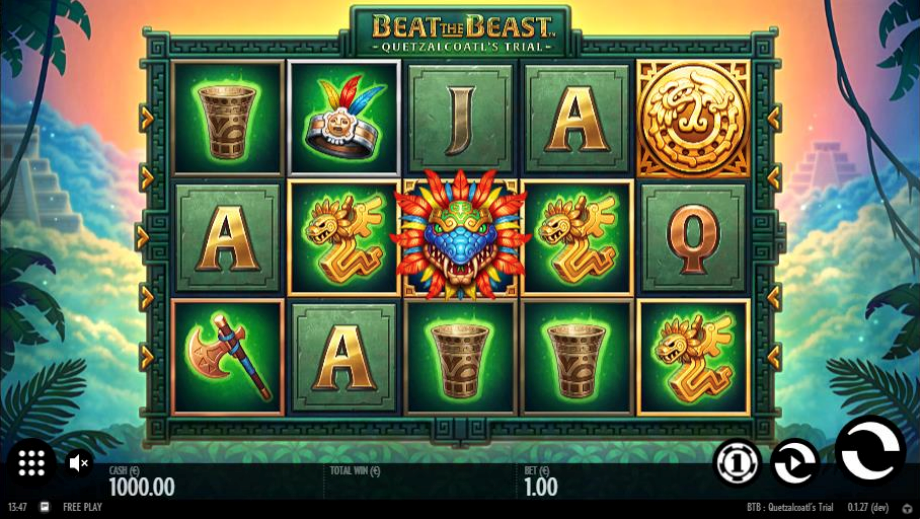 Are you ready to beat this beast?

Beat the Beast: Quetzalcoatl's trial transports you back to the Aztec empire. A time when the people worshiped and looked up to Quetzalcoatl extremely much, because he was their chosen god. This god, who was in the form of a serpent, similar to a dragon, was considered the creator of mankind and possessed an incredible power to control the weather and winds. Since it was a god that the Aztecs looked up to, they gave the finest gifts they could find to this serpent god. This in the hope that the finer the donations, the more happiness for the population. This resulted in an incredible wealth and now it's your turn to try to find this hidden enormous treasure.

This slot machine created by Thunderkick comes with a high volatility gameplay. Where you can play on a 5-reel and 3-row slot, with 9 paylines. When it comes to the game's RTP, there is no possibility for the player to influence this by, for example, changing the size of a bet. The percentage of the game's RTP is 96.16%. The betting options are as follows, Min.bet 0.10 euro and Max.bet 100 euro. Once inside the game, there is the opportunity to succeed in scoring the maximum win, which is 5555 X the amount bet. There are many different symbols that can appear and give different nice wins as well.

It's always fun when Thunderkick releases a new game, since you know that their game has been really thought through. They have a quality over quantity mentality and you know that their slot machine standard is top class. Where previous games such as Esqueleto explosivo, Pink elephants, Babushkas, Yeti Battle of Greenhat Peak and many more have provided fantastic gaming experiences. They have created a series called Beat the Beast. Where we get to meet a number of different powerful beasts and this series becomes even more motivating to play, as new versions are released.

Quetzalcoatl's Trial takes you deep into the forests of Mexico, to the Aztecs and their pyramids. Where the environment is incredibly colorful and tropical. In the background of the slot machine you can glimpse some Aztec pyramids among the dense forest. The game has a very nice layout, where each symbol is carefully created with nice details. While each symbol is fine, the main character Quetzalcoatl's symbol still stands out extra much. Where a very detailed snake with colorful yellow, red and blue colors is displayed. Once the various symbols hit a winning line, a pleasant green color shine around them. The game delivers awesome music that gives the extra magical touch. Since the game's effects and appearance are so nice, it's a pity that the spin buttons and bottom menu generally do not live up to the same fine standard. Just as the Aztecs gave their god Quetzalcoatl fine gifts, this game delivers a spectacular gaming experience to the player as well.

Collect wild symbols and get the beasts treasures

The snake god possesses an incredible wealth and as a player you want to take part in this. But how do you do it in the best way? Well by succeeding in getting to the bonus game.

To succeed with that you need to get 3 or more Quetzalcoatl Emblem symbols. When this bonus game starts you get 10 free spins. Where you can get another 10 free spins every time you get 3 or more Quetzalcoatl Emblem symbols. The layout of the bonus game is built with a 5 level free spin mode, where you get to the next level by collecting Wild symbols. When you as a player manage to take yourself to a new level, you will be rewarded with two extra free spins. Each time the meter reaches 5 Orbs the corresponding symbol is going to be replaced by the next mid-win symbol displayed. Once you have completed the last symbol meter, Quetzalcoatl Symbols will replace all previous mid-win symbols. Once the bonus game has come to an end, your final win will be shown, before you return to the base game again.

As previously mentioned, you can win a maximum of 5555 X your bet amount during a game round. If you reach this maximum amount, your game round will be terminated and there is no possibility to take part in any extra winnings in addition to the amount you have bet X 5555.

The slot machine with a long-lasting bonus game

Thunderkick shows once again how a successful gaming machine should look like. Where you as a player get an incredible experience in the form of eye-catching designs, a series of different symbols with nice wins and a bonus that gives the opportunity to receive a large amount of free spins as a player. As bonus rounds are always fun to get, this game does well in giving the opportunity to play it for a long time and enjoy its captivating experience. This is a cool game and fun as they take on the more and more forgotten god. But this will change, after the release of this game the name will come back. Do you dare to travel back to the time of the Aztecs and beat the beast Quetzalcoatl?

The release date is 19th of August