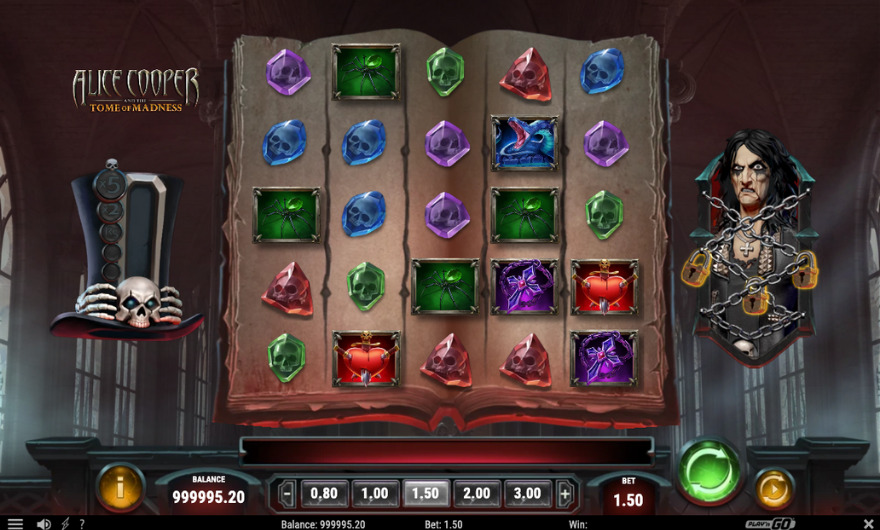 Alice Cooper and the Tome of Madness Slot Overview

Alice Cooper and the Tome of Madness is a new casino slot from Play’n GO, where we get to take part in a spectacular gaming adventure with this legendary rock artist. Alice Cooper is truly a very iconic person in the rock world, where since his early debut in 1969 he has captured the hearts of many people with his unique and raspy voice. This unique voice has been the basis for songs such as Poison and Schools Out, where these immortal classics are fully booming in many people's homes even today. This time we get to see another side of this rock god, where during one of his tours he opens a very special book. The pages are blank, and he decides to write down his memoirs, where he realizes that the book also writes itself. Where his life is retold in parallel universes and if the writing ends, his life will also end. Something that is really a nightmare but being able to control 5 different worlds through your writing also has its advantages, something that we get the chance to take part in within this slot.

Alice Cooper and the Tome of Madness is a video slot from Play’n GO that has 5 reels and 5 rows. You create a win by landing clusters that contain 4 or more of the same symbol types. You can choose between making a Min.bet of 0.10 and a Max.bet of 100. The game's RTP can, as usual, vary with this game provider, where there is an RTP of 96.20% by default, but always make sure to check what applies to your gaming operator before you start spin the reels. It is a medium/high volatility where you can win up to 3000X the bet.

In this slightly scary gaming adventure that takes place together with the rock legend Alice Cooper, we have a bunch of great features to help us in the hunt for the max win. The features are Cascade, Reality Effects, Alice Cooper Mega Wild and Hat of Madness.

Alice Cooper and the Tome of Madness Slot Information

The game's design consists of a theme with the rock legend Alice Cooper, where a curse has been casted on him that has resulted in negative as well as positive effects. It is a slot where a scary atmosphere permeates the spins and that it will be released around Halloween feels very fitting. In the background of the reels, you can see a very dark and eerie church, where to the right you see Alice Cooper himself with his Hat of Madness meter. This is a slot that can be played on all the device’s mobiles, notepads and desktops. You create a winning combination by landing 4 or more of the same symbol types in a cluster, where winning cluster activates the Cascade feature.

The lower paying symbols are gems with skulls that have the colors green, purple, blue and red. The higher paying symbols consist of a spider, a cross, a snake and a heart that has been stung by knives. The golden key is the game's scatter symbol and during the spins you can take part in 2 different wild symbols. One is the book that is filled with curses and the other is the Alice Cooper Mega Wild. Let's find out what the features do.

Alice Cooper and the Tome of Madness Slot Features

What is the max win in the slot Alice Cooper and the Tome of Madness?

What features are in the Alice Cooper and the Tome of Madness slot?

When you spin the reels and no profit is created, the Reality Effects feature can be randomly activated. There are then four different Reality Effects that can be activated, where these are Insane Asylum, The Dungeon, Chamber of Horrors and Temptation Room.

Chamber of Horrors = This will remove all symbols from the reels, where the only symbols left are the wild symbols.

Temptation Room = This will turn a random number of symbols into the same symbol type and also add a wild.

When you spin the reels and land 3 scatter symbols, the Alice Cooper Mega Wild feature is activated. The scatter symbols are then collected and leave wild symbols behind, when no more winnings are created the Alice Cooper Mega Wild symbol will be placed on any of the reels 2, 3 or 4. This is a wild that covers the entire reel and after landing, it will walk in a random direction to the right or left. It stays between the cascades until it has walked out of the reels. This wild helps to create more winning combinations by substituting for other paying symbols.

When you spin the reels and create winning clusters, the Hat of Madness will be charged. Depending on how many symbols you manage to charge its meter with results in you getting to experience different outcomes.

10 symbols = This will place 1 to 2 wilds on the subsequent cascade.

25 symbols = This will place 3 to 6 wilds on the subsequent cascade.

In the Reality Spins made, only the highest tier will be awarded.

Alice Cooper and the Tome of Madness Slot Conclusion

Some books that are open and read can have a big impact on the reader, but this book certainly stands out from the crowd. Where an innocent writing of his memoirs results in a very special curse, but where Alice Cooper after some exposure of it learns to handle its powers. It is an exciting gaming adventure that Play’n GO has created, where they once again use a legendary rock icon within their slot. Some other slots with rock icons that we have recently had a look at include ZZ Top Roadside Riches and Hammerfall. This slot is very reminiscent of the latter slot, whereby charging one meter you can unlock different features.

It is a slot where you create winnings by landing clusters of 4 or more symbols, and when this is created, the cascade feature is activated. Once this is activated, the snowball effect starts and large wins can be created during the same spin. The great thing here is that this results in a meter starting to charge and depending on how many symbols you manage to charge this meter with, gives different outcomes. Here you can take part in different amounts of wild symbols and also Reality Spins with different sized win multipliers. When you activate the Reality Spins, you get to choose between 1 of the 4 Reality Effects that are available which you then get 3 spins with.

These Reality Effects is something you also get the chance to take part in during dead spins, where it can then be activated randomly. Once this happens, there will be a lot of action on the reels, where, among other things, lower paying symbols can be removed, and all the higher paying ones can be shifted to the same symbol type. These are very lucrative effects that quickly can generate higher profits if you have managed to activate one of the win multipliers.

Alice Cooper himself is not only to the right of the reels, during the spins he can also land on the reels where he is a Mega Wild that covers an entire reel. The great thing about this is that it then walks in a random direction during the spins, which means that it stays for several spins and thus can help create many winning clusters. It will be a wonderful cocktail of different features that you get to experience during the spins, and it is a matter of taste regarding which of the 4 Reality Effects you think is best.

It's a wonderful theme that has been chosen together with one of the biggest and iconic rock profiles out there, where this time he is mixed with a curse-filled book that creates an incredibly atmospheric environment. It is a slot with the classic features that most slots from this game provider have, regarding Min/Max bet, RTP by default, volatility but its potential max win feels a bit low. Where they this time have chosen 3000X, which is ten times less than the potential maximum win that we got to take part in the gaming adventure within Hammerfall. Although it is a good mix of features, they sometimes feel a little weak in comparison with the solid ones we took part in at Hammerfall that could give explosive wins. It is clearly an entertaining slot, where the rock lovers as well as the lovers of features that are activated from filling up meters will like.

Alice Cooper and the Tome of Madness is a slot where we together with this rock legend open a book whose curses can have a lot of positive outcomes during the game.